WR Bryan Walters may have injured a shoulder in a play during Seahawks practice Wednesday that ignited a scuffle between the offense and defense. 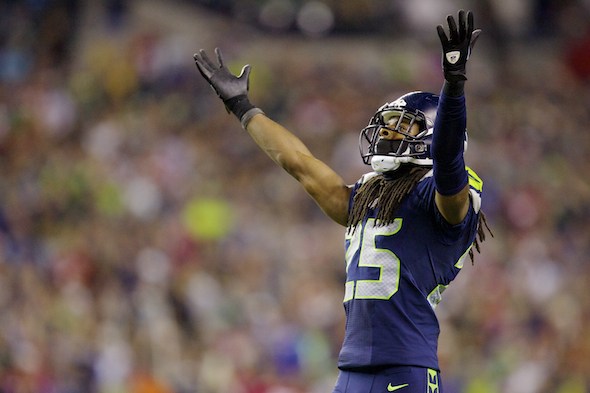 Richard Sherman, as is his habit, found himself in the middle of things at an intense practice Wednesday. / Drew Sellers, Sportspress Northwest

A mundane June practice flared up Wednesday with a little Seahawks-on-Seahawks mayhem that included a tangle between star CB Richard Sherman and reserve WR Phil Bates. The offenses and defenses jumped in to defend their teammates, and players had to be pulled apart.

No injuries from fighting were reported, but Sherman and Bates went at it without helmets. Walters had to have his shoulder wrapped and did not continue practicing. Coach Pete Carroll called the entire team together on the field at the VMAC practice facility to remind them that they are teammates.

Tension began during the padless, no-tackle practice when WR Bryan Walters caught a sideline pass over FS Earl Thomas and went down hard on his shoulder. He was slow to get up.

The sides began exchanging heated words, the offense apparently thinking the defenders were over-aggressive. On the next play, Sherman and Bates locked up on a pass play, then went at it. Bates appeared to throw the first punch. Percy Harvin, who was done with practice, and Doug Baldwin were in the middle of the scrum, as was Thomas. Marshawn Lynch, present but not practicing, was seen holding back Harvin.

After the Carroll lecture, practice continued and the players involved eventually began joking and about the dust-up. Sherman and Bates shook hands.

“We’re all so competitive if you press one wrong button, everybody will clear the benches,” Thomas told reporters.

“They are such a tight group of guys that they don’t want to give an inch sometimes,” he said. ” Most good teams are close and tight like that where they can practice like that. They were just having fun.”

Watching it all was owner Paul Allen, making s rare practice appearance. He discovered no let-up in team intensity.