Close of 2013 Seahawks’ season has ring to it

At a private ceremony in downtown Seattle, the Seahawks players, coaches, executives and staffers received Super Bowl rings and a concert by Usher. 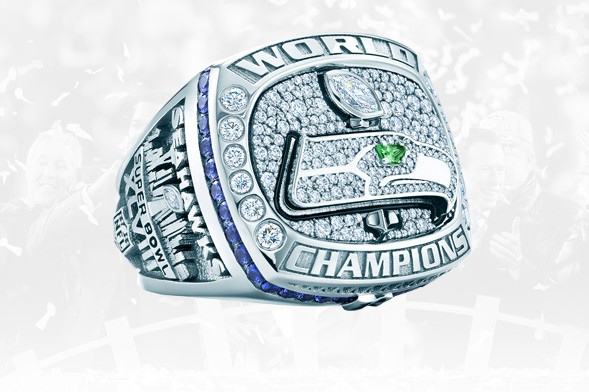 The gaudiest memento of NFL success — a Super Bowl championship ring — was delivered Thursday night to the Seahawks at a private ceremony at the Experience Music Project in downtown Seattle with pop star Usher as the featured entertainment. Invited were all members of the championship team, coaches, executives and staffers who had roles in the Seahawks’ first championship.

“The design of the first Seahawks Super Bowl ring represents a distinctive tribute to this team, our fans, the Pacific Northwest and the Seahawks victory in Super Bowl XLVIII,” said McLoughlin.

The release described the ring:

The white gold Seahawks Super Bowl XLVIII championship ring features a three-dimensional Seahawks logo of 64 round diamonds with a vibrant emerald hue tsavorite eye.  The iconic logo is outlined in blue and is framed by 12 diamonds. The Vince Lombardi Trophy, comprised of one marquis diamond, stands in the background amongst a sea of 107 round diamonds with a border reading “WORLD CHAMPIONS.”  Forty blue sapphires surround the ring top flanked by two “12” flags.

The shank, or sides of the ring, tells the story of the championship season.  One shank includes the team’s final record of 16-3, a southward view of CenturyLink Field with the “12” flag and Mt. Rainier, highlighted with the individual player’s name and number.  The other side features the Seattle skyline, Vince Lombardi Trophy with a marquis diamond, Super Bowl XLVIII logo and NFL shield.

Tiffany has created the Vince Lombardi Trophy since its inception in 1969.

“Super Bowl XLVIII marked monumental firsts, “Victoria Reynolds, director of business sales, said in the release.  “It was the first time that the world’s most-watched sporting event took place in New York, the city where Tiffany & Co. was born more than 177 years ago; and also marked the first championship victory for the Seattle Seahawks.

Smartphone users may download, or update, to version 2.0 of the Seahawks mobile app to virtually wear the ring.  Fans are invited to share their images on social media by using the hashtag #SuperBowlRing.

Earlier in the day after the final practice of the three-day mini-camp, Carroll and quarterback Russell Wilson talked about the coveted reward.

“It’s really an honor. It really is an honor,” Carroll said. “The honor in it comes from doing it together with all these guys. We feel very fortunate and we’re very humbled that it’s come to this now. We’re going to get this thing done and then move on along with it.

“But it’s just really cool to have done something like that together. We set out to take it as far as we can, and we did.”

Ever the forward-thinker, Carroll wants to focus on the 2014 season and detach from the successes of previous seasons, insofar as it possible. The ring ceremony, a tradition for every NFL team, is a last glance in the rear-view mirror.

We like nice things…. So let’s do it again http://t.co/DKwGXLD1mz

Everybody hates Doug… Y’all know what it is! #SuperBowlChamps pic.twitter.com/v2EnOXy5Zg

Only one scuffle; mini-camp done

Aside from a minor tangle between RB Christine Michael and SS Jeron Johnson, the Seahawks had a good conclusion to the June workouts.

“We had a really good day today,” Carroll said. “We’ve had just a fantastic off-season. We had such great attendance, such great focus. We’ve seen so many guys come back to us that were on our roster last year (who) didn’t participate (in 2013), that really gave us a boost along with the new guys (from the draft and free agent signees). The way we worked, we got a lot done and we are really excited about that.”

The only reported casualty from Wednesday’s fight between receivers and defensive backs was a sore right shoulder sustained by WR Bryan Walters, who fell hard to the ground. The injury was the spark that ignited the fracas, not a result of it. Walters watched practice with his arm in a sling. Carroll said he should be ready in a couple of weeks.

The Seahawks are off for five weeks until training camp begins July 24 or 25.