Seahawks DT Jesse Williams lost his rookie season to knee problems. But treatment has repaired him to the point where finding skin for more tats is his biggest physical issue. 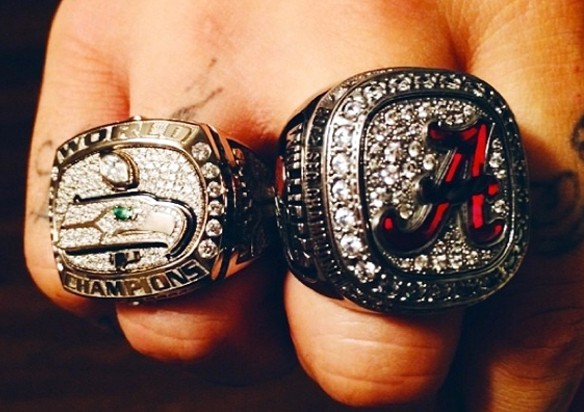 Pain management is a basic part of any pro football career. Jesse Williams more than most, because he also volunteers for hurt. As the most tatted-up Seahawk, he willingly undergoes the needle for so much art and messages that he is running out of canvas.

In fact, he has gone too far. Behind the short-cropped hairline, across the front of his scalp that is a highly sensitive part of the body, a cursive script reads, “Loyalty over Royalty.”

“Extremely painful,” he said, smiling, after practice Thursday. “I don’t recommend it to anyone.”

The involuntary portion of Williams’ pain management involves his knees and was much more consequential. It cost him several rounds of the 2013 draft — the Seahawks took him in the fifth — and all of his first season in Seattle. It nearly cost him his career.

“I was (bothered) a lot, to be honest,” Williams said. “I tried to tough it out as much as I could. Watching back on film, even from rookie mini-camp to now, getting off the ball, pushing off my leg. It’s night and day for me to see . . . It’s a lot easier.

“It’s a welcome back party for my legs.”

The party carried on though the recent mini-camp, where Williams showed flashes of why he was considered a likely first- or second-round draft pick after two stellar years at Alabama. He is in a group of a half-dozen Seahawks players the coaches like to call “redshirts” — RB Christine Michael, CB Tharold Simon, DL Greg Scruggs, DL Jordan Hill, LB Korey Toomer — who played little or not at all in the Super Bowl season because of injuries or a stacked position, but are considered potential front-line talents.

After the season, Williams returned to his native Brisbane, Australia, and began a cycle of orthokine injections, a derivative of platelet-rich plasma treatments in which blood is drawn from the patient and centifuged down to separate out blood platelets that enhance and accelerate soft tissue healing.

Besides the injections, which are not FDA-approved in the U.S. but are done routinely here and around the world, particularly among pro athletes, Williams dropped 15 to 20 pounds to around 315. A vigorous rehab program appears to have salvaged a career that a year ago had a grim outlook, according to coach Pete Carroll.

“I really thought that maybe Jesse was done — we didn’t know coming out of last season,” Carroll said. “He had a tremendous offseason, his rehab work was great, he worked every day. He’s ready to get in the middle of it. To bring that guy back to us at full speed could be really a great addition.”

The optimism around the Seahawks makes it easy to develop ideas that every player they acquire is the next big thing. Williams still hasn’t been tested in game conditions as a pro, and the year lost on the injured-reserve list didn’t help his progression.

“We’re anxious to see how he handles camp, and we’ll make sure he does handle it well,” Carroll said. “We’re not going to over-do it with him until we really understand how far back he is.

“Managing Jesse will be really important in the first month or so that we’re back (in training camp). We’ll see how he handles it, but he should be right in the middle of the competition.”

Williams had arthroscopic knee surgery after his senior year at Alabama — where he was introduced to the concept of championship rings — but probably rushed his return to make the annual scouting combine. On paper after the draft, he had a shot for the spot occupied by Tony McDaniel, but never made it out of training camp.

The sidelines brought emotional pain to go with the physical pain.

“It was really tough for me,” Williams said. “It was a bit of a dagger. Being a competitor, and coming off two pretty good seasons at Alabama, then having a blow like that. Mentally it was tough at the start, but I tried to take it as positive as I can.

“I had my iPad with me, I was in meetings and stuff like that. Going to the Super Bowl and traveling with the team, being left out, being on the outskirts of everything, it sort of pushed me even more to get ready and come back this season stronger.

“Like I told the guys, hopefully that Super Bowl trip was a practice run for next time.”

If that thought proves prophetic, not only will Williams have run out of epidermis for tats, he will be running out of hand room to accommodate championship rings.