Sounder Clint Dempsey’s score for a 2-1 lead seemed enough, but Portugal struck in the 95th minute for a draw that made tougher the U.S. road to the World Cup knockout round. 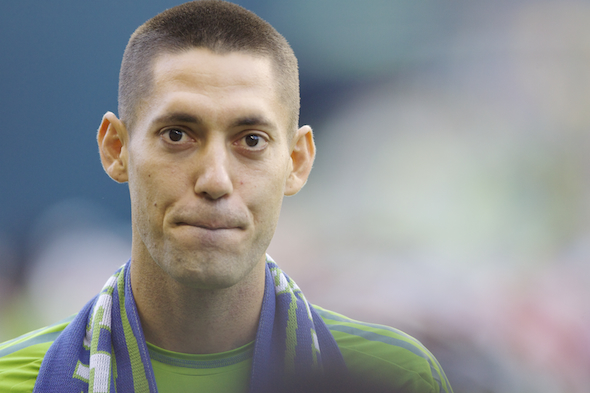 The Sounders’ delegation represented splendidly Sunday in the Brazilian jungle, helping shove the U.S. National Team to the brink of an astonishing advance to the knockout round of the World Cup. But at nearly the last moment of the 95th minute, Portugal scored the equalizer for a 2-2 draw that deflated a national celebration, yet still left the door open to advance.

The U.S. (1-0-1) can reach the round of 16 with a win or a draw against Germany starting at 9 a.m. PT Thursday, but the route looked much less arduous in the 81st minute after the Sounders’ Clint Dempsey, playing with a broken nose and without a mask, directed a point-blank shot off his abdomen into the net from Graham Zusi’s cross.

Zusi drew the start from coach Jurgen Klinsmann, replacing injured striker Jozy Altidore with a midfielder and trusting Dempsey, the team captain, to go it alone up top.

The 2-1 lead in the hot, humid Amazon city of Manaus faded in the final 30 seconds as Portugal’s Christiano Ronaldo, who until then had a mediocre performance for the world’s greatest player, delivered a brilliant cross to a streaking Silvestre Varela, who headed the ball from eight yards past shocked goalkeeper Tim Howard.

The score kept alive the Cup chances of Portugal, ranked fourth in the world entering Brazil, after a humiliating 4-0 loss to Germany in its opener. It turned the U.S. anticipation into what felt like a heartbreaking loss, even though most American fans a week ago would have been happy with four points through the first two games.

Entering in the 72nd minute for his first World Cup experience was the Sounders’ DeAndre Yedlin, the 20-year-old defender from Seattle’s O’Dea High School who seemed unlikely to see action. But he responded well with several clean touches and helped set up Dempsey’s go-ahead score.

Yedlin ran down a ball that nearly crossed the endline off the far post and centered the ball in front of the goal out 15 yards, where it deflected twice before Zusi gathered on the left flank for the pass that led to Dempsey’s second goal of the tournament.

The play appeared to complete a turnaround from a start that looked devastating to the U.S., which surprised many with its 2-1 win over Ghana in the opener. A terrible clearance by defender Geoff Cameron ended up at the feet of Portuguese star Nani, who took advantage with a score in the fifth minute.

The U.S. rallied with a much stronger attack than its tepid show against Ghana, having nine shots by halftime after getting eight total in the opener. But it remained 1-0 until the 64th minute, when Jermaine Jones boomed a shot from 25 yards that blew past goalkeeper Beto.

Portugal poured on the pressure and U.S. coach Jurgen Klinsmann subbed in defenders, but it appeared he had pressed all the right buttons — at least from the the fifth minute to the 95th.

The U.S. can even advance with a loss if Portugal and Ghana tie in game that will be played simultaneously. Here are the scenarios, per ESPN:

To surpass the U.S., Portugal needs a goal-difference swing of five (head-to-head is level). So for instance, Portugal would need to win 3-0 and U.S. lose 2-0, among other equivalent scorelines. The teams will draw lots if goal difference is identical (this would happen with a 3-0 U.S. defeat and a 2-0 Portugal win, for example).