Soccer star Hope Solo entered a not guilty plea to domestic violence charges Monday and is scheduled for a pretrial hearing Aug. 11. 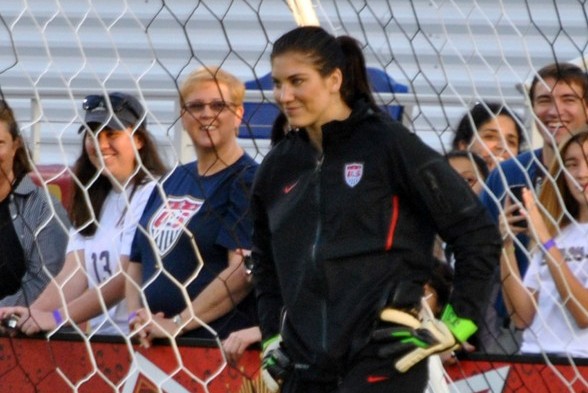 Hope Solo, goalkeeper for the U.S. women’s national team and a member of the Seattle Reign, pleaded not guilty to domestic violence Monday. / Wiki Commons

U.S. soccer star Hope Solo entered a plea of not guilty Monday after police charged that she assaulted two relatives — her sister and a nephew — at her Seattle-area home early Saturday morning. Solo was released without bail after a weekend in lockup in South King County on the conditions that she have no contact with the victims and that she not drink alcohol.

During the 32-year-old Solo’s court appearance, she was asked if she understood the domestic assault charges filed against her. She answered, “I do.” The court set a pretrial hearing for Aug. 11.

After responding to a 911 call Saturday, police said Solo, the national team goalkeeper and winner of two Olympic gold medals (Beijing, 2008; London, 2012), would not “stop hitting people” or “leave her house.” She appeared “intoxicated and upset,” according to police, who reported that her sister and 17-year-old nephew had “visible injuries.”

While police described Solo as the “primary aggressor” who “instigated the assault,” Solo’s attorney, Todd Maybrown, contradicted that assessment, saying his client did not commit a crime.

“Our investigation reveals that Hope was assaulted and injured during this unfortunate incident,” Maybrown wrote in an e-mail. “We look forward to the opportunity to present the true facts in court and to having this matter behind Hope very soon.”

Maybrown also told the court that that Solo was hit over the head with a broom handle during the fracas.

Solo, also a member of World Cup teams in 2007 and 2011, plays for the Seattle Reign FC, which acknowledged the incident.

“We are aware of the situation with Hope and are now gathering information,” the team tweeted. The Reign, in Rochester, N.Y., Sunday, beat the Western New York Flash  2-1 with Haley Kopmeyer in goal. They have a home match Saturday.

Solo’s husband, Jerramy Stevens, a former University of Washington and Seattle Seahawks tight end, was in court Monday but declined to speak with the media.