The Mariners still need a lot more offensive improvement before they can be considered as a possible entry into the playoffs. 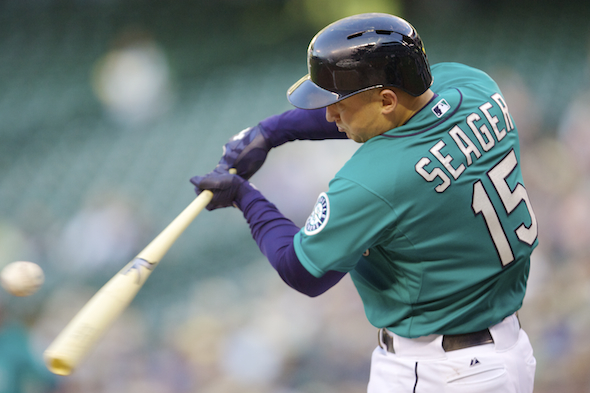 Kyle Seager has hit 11 home runs this season at Safeco Field after hitting 13 in 688 at-bats before this season. / Drew Sellers, Sportspress Northwest

Despite a five-game winning streak ending Wednesday with a 5-4 loss to the Boston Red Sox, the Mariners have put together a laudable month with 15 wins, the most they have had in June in four years. Approaching the halfway point of the season, the Mariners won five of six, eight of 11 and 16 of 25.

Since their nadir, an eight-game losing streak from April 15-22, the Mariners are 35-24 (.593), the second-highest winning percentage in the majors over that span. While they have received superb pitching during the surge – the Mariners are on track to post the lowest monthly ERA in franchise history (2.80, July, 1991) – their recent offensive breakout has played a major factor in the success.

The Mariners have hit two or more home runs in five consecutive games (since June 16 vs. San Diego) at Safeco Field, the first time since the facility opened in 1999 that has happened.

Kyle Seager hit three and has 11 at Safeco this season after hitting 13 in his first 668 career at-bats at the park. Mike Zunino also heated, homering in four of his last five games. Logan Morrison is batting .333 with three homers and eight RBIs over his last eight. Even Brad Miller, hitting .159 three weeks ago, has found a niche, batting .313 with four homers and 10 RBIs over his last 25.

Since May 1, the Mariners have elevated their team batting average from .232 to .242 and their OPS from .655 to .678, a huge improvement as these things go. Coupled with outstanding pitching, especially from Felix Hernandez, this is why the Mariners are a mid-year contender for a wild card spot.

Entering the start of Friday’s Cleveland series, the Mariners are just one game behind Baltimore in the wild card standings and 2.5 back of the Angels.

This is not the batting profile of a team destined to reach the postseason, regardless of how good its pitching is. Go back to 1995, when the current playoff format was adopted, and no team earned a wild card berth with an OPS of less than .773. Seattle sits at .678.

The following are American League wild card teams since 1995 with the lowest OPS numbers, and their league ranks. The Mariners are included for comparison purposes:

Look at the disparity in team batting average. Seattle is hitting 22 points below the worst team on the list, the 2001 Athletics, who won 102 games. Look at on-base percentage: Only the 1997 Yankees had a lower number than the 2014 Mariners. And look at the disparity in slugging percentage and where wild card teams ranked vs. this year’s Mariners.

With pitching-healthy Seattle remains prominent in the wild card race despite its poor offensive overall rankings, the Mariners are expected to be among the buyers as the July 31 trade deadline nears.

GM Jack Zduriencik admitted as much in an appearance on 1090 The Fan’s Steve Sandmeyer Show Wednesday when he said he would “be surprised” if the club didn’t swing at least one major deal in advance of the deadline.

The White Sox are a reported target. Adam Dunn, Alexei Ramirez and Dayan Vicideo all hold appeal for the Mariners, especially Vicideo, whom they’ve targeted in the past.

That’s still a month away. Any deadline deal depends on the Mariners continuing to improve their offense in the manner of the past month. If they can, this team has a shot at the postseason, strange as that seems.