It went to the 120th minute before it was determined the U.S. had to leave the World Cup. Sounders Dempsey and Yedlin played well, but now it’s time for melancholy. 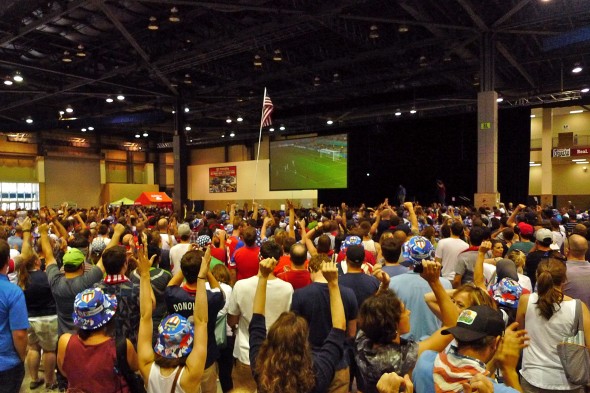 As the game wore on, there was little doubt about the identity of the superior team. Which made the drama all the more compelling for a nation that loves the underdog. For a nation that for a century has been world’s overdog, that’s some irony. But let’s not allow geopolitics to get in the way of a good story.

Into the Clink’s event center, a noisy sprawl of 4,650 fans pressed together in front of a giant TV screen to bear communal witness to a sports fairy tale: The over-matched U.S. doggedly resisting an overwhelming European soccer powerhouse.

Belgium so dominated play for 90 minutes in Salvador, Brazil, that each each surge produced an industrial-strength cringe in the crowd that otherwise stood for three hours on concrete, chanting and cheering in a fashion that has made the Sounders a national phenomenon.

Their beloved Yanks also stood, bruised and bleeding, at nil-nil for 90 preposterous minutes, which advanced the contest into something of a moral victory. From there, all could imagine a deflection, or a penalty kick, or an own-goal, providing the upset.

Better yet for the Seattle crowd, Sounders captain Clint Dempsey seemed a moment away from a scoring breakthrough, while Seattle teammate DeAndre Yedlin, Robin to Dempsey’s Batman, was all over the pitch, dazzling with his speed, poise and service to the box.

In extra time, the moment seemed ripe for a Yedlin cross to a Dempsey header that would put the U.S. up, followed by triumph, followed by an impromptu victory parade that would have carried off goalie Tim Howard to whatever part of Valhalla is reserved for sports warriors.

In saving 15 shots, Howard set a World Cup record and earned the undying gratitude of millions of Americans who knew nothing of soccer but realized they didn’t have to know anything to appreciate a brilliant athlete delivering at the apex moment of his career for his industry and his country.

But this was not a Disney movie. This was a global-stakes, ruthless contest where sentiment was tied for last. Fourth of July parties would not come with a built-in conversation starter. Even though Howard’s remarkable work seemingly could postpone indefinitely the inevitable, in the 102nd minute, Belgium’s Kevin De Bruyne broke the deadlock. So was broken the tension in the events center, the exhalation palpable.

Three minutes later, Romelu Lukaku, who had just come into the match and set up De Bruyne’s score, scored himself. Two-nil, Belgium, 13 minutes left. Fans began looking at watches and exit doors. It was, after all, a 90-degree Seattle day, and they were indoors.

Moments later, the air above their heads was filled with red, white and blue flags again as the most unlikely among the Americans in the Amazon, 19-year-old Julian Green, a Cup rookie who subbed in two minutes earlier, scored on his first touch after an on-the-money pass from Michael Bradley.

From depression arose fury, as the teenager — as Yedlin’s substitution did earlier — seemed to reinvigorate the exhausted Americans. They pressured as they had not all afternoon, Dempsey even getting a shot that was stoned by 6-foot-6 goalie Thibaut Courtois.

The Americans’ shot to tie lasted until the 120th and final minute. Then came the thud that always follows anything less than victory, this one particularly loud after four years of preparation that was sound and clever enough to get the U.S. out of the “Group of Death” round and into knockout play.

Belgium goes on to play Argentina in the quarterfinals, and the U.S. players will come home. How soon, Sigi Schmid didn’t know. The Sounders coach, along with numerous players, watched the game at the events center, much more eager for a win than a return of their two teammates. But the return of Dempsey and Yedlin is the Seattle backdoor bonus of the defeat.

The Sounders play a Cascadia Cup match Saturday in Vancouver, B.C., but Schmid, a longtime veteran of the international soccer scene, sounded dubious about the participation of Dempsey and Yedlin.

“They are drained, physically and emotionally,” Schmid said. “After you go through the entire World Cup experience, a loss lets the air out.

Melancholy. That’s the word. For three hours, Dempsey, Yedlin and their teammates and coaches, were at the center of the global universe, raging to grasp what they could not reach. And now, it’s over.