Mariners are finally hitting when it counts

The Mariners enter a series with the Chicago White Sox riding a four-game winning streak and nine games above .500 for the first time since 2007. 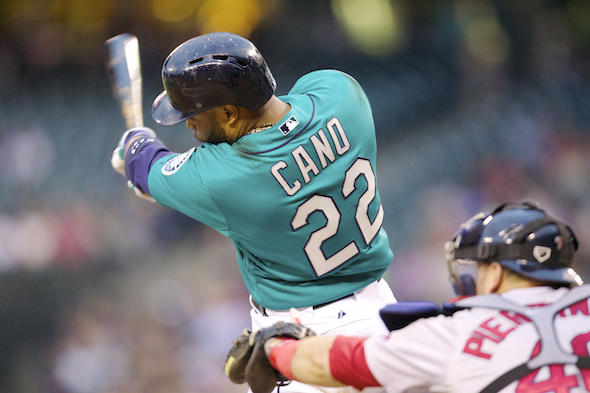 After sweeping a trio in Houston, outscoring the Astros 28-8, to start a six-game, seven-day road trip, the Mariners (47-38) find themselves nine games above .500 for the first time since the end of the 2007 season, a baseball eternity ago. The current roll –  four wins in a row, 10 of 12 and six consecutive on the road – is already prompting playoff jabber on sports radio, even though …

(a) Remaining are 77 full-of-potholes games; (b) a losing record in the home park (21-22); (c) even after sweeping last-place Houston, the Mariners are the only wild card candidate without a winning record (24-24) against sub.-500 teams; (d) history suggests their luck probably won’t last.

In arriving at 47-38, the Mariners had three five-game winning streaks and losing streaks of eight, five, five and four games. Just when you think they’ve fixed their bearings on due north, they tumble south. Also keep in mind that these are the Mariners – a franchise historically constructed to disappoint.

Go back two days shy of three years ago, to July 5, 2011. The Mariners won three in a row and four of five to even their record at 43-43. Local optimism soared, thoughts of an end to a 10-year absence from the AL playoffs temporarily kindled.

The Mariners responded to the enthusiasm with a franchise-record 17-game losing streak, sucking all oxygen out of that season.

Fans with a modicum of memory have reason to be cautious with their emotions over the recent run. Fans with a longer attention span probably won’t bother with an emotional investment, even if it’s warranted, until the Seahawks are in Week 3.

After Wednesday’s 5-2 win at Houston, the Mariners are hitting .268 with runners in scoring position. The big deal? Last year, they hit .228, the key stat in a 71-91 black eye and fourth-place finish. The Mariners have not hit above .250 with RISP in any of the last five seasons. Their .268 this year is best the team has hit in a decade. escortcity.ch escort girl genève

In fact, the 40 points the Mariners have gained on their RISP batting average from last season to this represents the greatest one-season turnaround in franchise history – by a significant margin, as the following shows:

Largely as a result of clutch hitting, the Mariners have a +70 run differential. Among all MLB teams, only the Oakland Athletics, at +125, are better.

More impressive than his .379 with RISP is Cano’s 1.167 OPS with runners poised to score. Only two Mariners have ever done better and neither was named Ken Griffey Jr. Best single-season OPS marks with RISP:

KEEPING UP WITH JONES

After going 7-for-11 the first two games of the Houston series, including a four-hit, three-steal effort Monday (first Mariner to do that since Ichiro in 2004), rookie James Jones went 1-for-5 Wednesday – without a stolen base. This leaves him with 17 swipes in 57 games, including 205 at-bats.

Question: How many players since 1914 (when statistics first became available) have stolen 17 or more bases in the first 60 – or fewer – games of a career with a maximum of 205 at-bats? Answer: seven, including the less-than-legendary Fitz Maisel 101 years ago. The list: