Declaration of Independence from Medocrity

On the national day of independence, Seattle sports fan shall seize the moment of universal contention to declare independence from the tyranny of sports mediocrity. 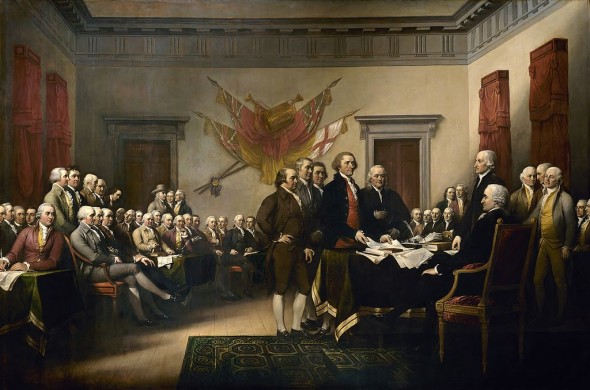 Seattle sports fans gather for the signing of the Declaration of Independence from Sports Mediocrity. / Drew Sellers, Sportspress Northwest file

When in the Course of sporting events, it becomes necessary for one city’s fans to dissolve the pejorative rhetoric that has connected them with others, and to assume among the powers of the earth, the separate and equal station to which the Laws of Nature and of reverse drafts entitle them, a decent respect to the opinions of mankind requires that they should declare the causes which impel them to the separation.

We hold these truths to be self-evident, that all sports markets are created equal, that they are endowed by their commissioners and tax collectors with certain unalienable Rights, that among these are Life, Liberty and the pursuit of Postseason Bling.

That to secure these rights, sports leagues are instituted among fans, deriving their just powers from the consent of the purchased ticket and TV subscription. That whenever any Form of Denigration becomes destructive of these ends, it is the Right of the Sports Fans to alter or to abolish it, and to institute new Realities, laying its foundation on such principles and organizing its powers in such form, as to them shall seem most likely to effect their Safety and Happiness.

Prudence, indeed, will dictate that Condemnations long established, such as Forbes magazine’s charge that Seattle is “The Most Miserable Sports City,” should not be changed for light and transient causes; and accordingly all experience has shown, that the Seattle market is disposed to suffer, while mediocrity is sufferable, than to right itself by abolishing the forms to which they are accustomed.

But when a long train of abuses and usurpations, pursuing invariably the same Object of denigration, it is their right, it is their duty, to dispel such denigrations, and to provide new Guards for their future success.

Such has been the patient sufferance of Seattle; and such is now the necessity which constrains it to alter their former belief in the adequacy of sports mediocrity. The sports history is a history of repeated injuries and usurpations, all having in direct object the establishment of an absolute Tyranny of defeatism.

To prove this, let Facts be submitted to a candid world that such Tyranny is at its end.

In their 38th year, the Seattle Seahawks did vanquish the Standing Army of the Denvers in the Battle of the Meadowlands and secured for themselves and the inhabitants of their State of Twelves a Championship unprecedented in their depository of public Records.

In their 37th year, the Seattle Mariners are 47-38 and among the premier practitioners of their form of public Exercise. They have abandoned a disagreeable past in which they plundered our seas, ravaged our Coasts, burnt our towns, and destroyed the lives of our people.

In their sixth year, the Seattle Sounders have ascended to the primacy of the favored endeavor of King George with a mark of 11-3-2. A tandem in their hire was dispatched to the death, desolation and Tyranny of the jungles of Brazil and served with honor in  circumstances of Cruelty & perfidy scarcely paralleled in the most barbarous ages.

In their 124th year, the Huskies scrummers of the citadel of education achieved a 9-4 mark in their new palace bestride the lake, after which the commander abdicated his station and declared us out of his Protection, then took up anew in a foul land where he vowed to wage War against us. But in succession was found a new leader whose measure was affirmed by the councils of purple to be of such repute that the name of the great warrior, Don, was whispered in comparison. He has committed himself and his captains to end the practice of distribution of treasure in coffee cups, in order that he might allay the dangers of invasion from without, and convulsions within.

To the besmirchers of our sporting character, we have appealed to their native justice and magnanimity, and we have conjured them by the ties of our common kindred to disavow these usurpations, which, would lead inevitably to interrupt our connections and social media correspondence. They too have been deaf to the voice of justice.

We, therefore, the sports representatives of Seattle, in General Congress, Assembled, appealing to the Supreme Judge of the world for the rectitude of our intentions, do, in the Name, and by Authority of the good People of Seattle, solemnly publish and declare, That  Seattle is, and of Right ought to be Free of the yolk of mediocrity, and they are Absolved from all linkages to the burden of previous failure, and that all connection between them and the previous reputation and history is and ought to be totally dissolved; and that as successful enterprises, shall have full Power to contend annually, to win championships, establish Commerce, and to do all other Acts and Things that other sports markets may of right do.

And for the support of this Declaration, with a firm reliance on the protection of divine Providence, we mutually pledge to each other our Lives, our Fortunes and our sacred Face  Paint.