Serie A club Roma is in hot pursuit of Sounders’ young star. But a transfer likely won’t happen until after the end of MLS play. Meanwhile, the kid is back home from Brazil. 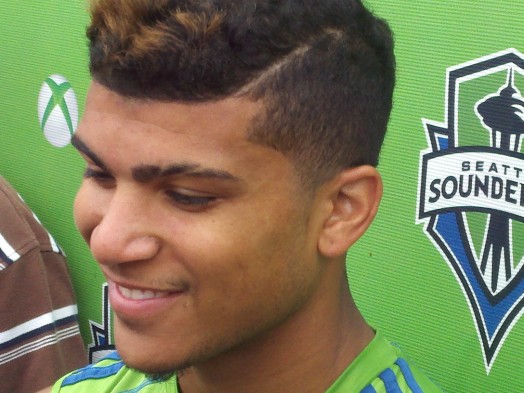 DeAndre Yedlin was back at practice Monday, but the big time beckons. / Art Thiel, Sportspress Northwest

Mere moments after his return to the warm bosom of Sounders soccer came news Monday that World Cup darling DeAndre Yedlin is being wooed by the siren call of top-flight European soccer.

As is often the the case when a boy goes off on an adventure, he comes back a man.

The services of the Sounders’ homegrown talent from O’Dea High School, who turns 21 Wednesday, are being sought by Roma, one of Europe’s most prestigious clubs and a giant in Italy’s premier league, Serie A.

According to Italian newspaper La Gazzetta dello Sport, a deal is all but done to make Yedlin the first member of the U.S. national team to cash in on the World Cup. But the transfer will be delayed to allow Yedlin to complete his MLS season through November.

Roma, one of the biggest clubs in Italy and primarily owned by an American investment group, finished second in Serie A last season and will play in the UEFA Champions League next season.

The transfer fee would probably be around $8 million, La Gazetta speculated.

No one in the Sounders camp was denying the report, specifically Yedlin, who practiced Monday at the club’s Starfire complex in Tukwila.

“I’m letting my agency take care of that,” he told reporters after practice. “They haven’t got back to me on that information. My focus is on the Sounders and winning an MLS Cup.”

But as with any talented U.S. youngster, the lure of European soccer is compelling. Asked if Europe has been a goal, Yedlin acknowledged it was so.

“Yeah,” he said, “but MLS is such a growing league. It’s becoming one of the top leagues in the world.”

So much has changed so suddenly for Yedlin, who probably was as surprised as anyone that U.S. coach Jurgen Klinsmann named him to the 23-man final squad. More surprising was that he played in three games, including most of the final game against Belgium, when he entered in the 31st minute for the injured Fabian Johnson and played well.

“It was a little nerve-wracking,” he said of Klinsmann’s choice to have him play a substantial role in the knockout-round game. “I wasn’t really expecting that. It helped that I didn’t have time to think about it. Just go in and play.

“It was good, though. Once I got in I felt comfortable, I relaxed.”

Sounders general manager Adrian Hanauer indicated that something was brewing with Yedlin’s future.

“DeAndre has had a very good season in Seattle and obviously had a fantastic World Cup,” Hanauer wrote in an email to reporters. “It has drawn lots of interest for him from leagues around the world. For now, DeAndre is in Seattle and we need him to help us win our upcoming games against Portland. If something transpires with a foreign team, we will announce it.”

Yedlin, who returned to New York and made the national-TV morning talk show circuit, said he was feeling the acceleration of his career.

“Yeah, definitely,” he said. “I wasn’t sure I was going to Brazil. That was a big one. So now I can look at my goals and re-evaluate, see where I want to be in the next six months or a year. I’ll be doing some of that in the next few weeks.

“We were gone for two months, and it seems like a day. Everything’s a blur. Some of those moments, I’d like to relive.”

Yedlin’s youth, talent and elevated profile made it all but inevitable that Europe would call. Polite as Yedlin is about MLS, there’s no surprise about the development.

“Why does Pau Gasol play in the NBA, or Manu Ginobili?” Sounders coach Sigi Schmid said Monday. “The league is better than in their home countries. For certain players, it’s the right thing to do to go overseas. Clint Dempsey has done it, Michael Bradley has done it, and now they’ve come back.

“The opening (Yedlin) creates means someone else will take advantage of that opportunity. The player always tries to play at the highest level he can.”

Logical as Schmid tried to be, when Yedlin advanced into the U.S. finale so early, the coach sensed immediately that he was about to lose his star youngster to the world. Asked if he had mixing feelings at that moment, Schmid smiled and said, “Kinda . . . sorta.”

There was also pride in having the Sounders contributing the MLS’s first homegrown player to USMNT.

“How many 21-year-old right backs have three World Cup games under their belt?” he said. “That’s a very exclusive club. We’re proud of our academy.”

Schmid has more immediate concerns: Playing the archrival Timbers twice in five days with his roster in tumult. By his count, nine of the usual 18 active players were unavailable to him Saturday when the Sounders lost at Vancouver 1-0.

The Sounders will have back Osvaldo Alonso and Gonzalo Pineda after suspensions, but Yedlin, while available, sounded doubtful about Wednesday’s U.S. Open Cup game at Starfire, but committed to play Sunday at the Clink when 67,000 are expected for a 7 p.m. game that begins not long after the World Cup final concludes. Dempsey won’t return to Seattle “until later in the week,” Schmid said.

The emotional drain from the World Cup intensity was palpable.

“It’s heartbreaking,” he said of the loss to Belgium. “We went in trying to win the thing. If you don’t have that goal as a team, you won’t do well, even if some call us underdogs.

“Losing is a letdown. But to come back and see all the support from Americans and see how proud they are of us, it kind works out a little bit. We definitely helped change soccer in America a little bit.”

And so was Yedlin changed by the World Cup.

“You see guys like Ronaldo and Muller on TV, but you don’t know what it’s like to play them,” he said. “Just to see how quick they are, their movements, and compare yourself to them, was a big takeaway for me. It really showed me where I need to get to.”

Schmid said the profile Dempsey and Yedlin brought to the Sounders was a boost for the franchise in terms of global name recognition. He told a story of a call from an international club seeking one of his players. The rep said the player would have to get used to crowds of 30,000 or more. Schmid agreed.