Washington unveiled its Husky Hall of Fame class of 2014 Tuesday, among the honorees five athletes, one administrator and two national championship teams. 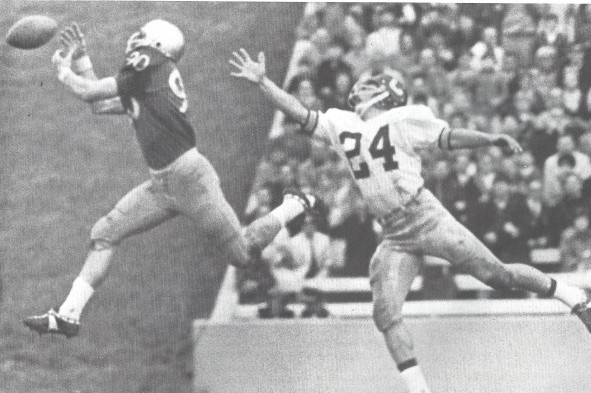 Dave Williams (90), streaking past a Cal defender in 1965, set UW tight end records that lasted for more than 40 years. He was one of five athletes elected to the Husky Hall of Fame Tuesday. / David Eskenazi Collection

The University of Washington Tuesday announced its Husky Hall of Fame Class of 2014, which includes five athletes, one administrator and two national championship teams. The class will be formally inducted Oct. 23 in a ceremony at Alaska Airlines Arena on the UW campus.

A closer look at the inductees:

MARIO BAILEY: Earned consensus first-team All-America honors as a senior in 1991 when he helped lead Washington to a 12-0 record and a share of the national championship. Bailey caught 62 passes for 1,037 yards and a Pac-10 record 17 TDs that season. He was the 1991 Pac-10 co-Offensive Player of the Year. Bailey finished his career as UW’s all-time leader in receiving yards (2,093) and touchdowns (26), and No. 2 in receptions (138). After UW, Bailey played for the NFL’s Houston Oilers and in NFL Europe.

JA’WARREN HOOKER: Hooker won six letters in two sports between 1997-01. He was the Pac-10 Track Athlete of the Year in 1998 and 2000, the only Husky athlete ever to win that award. Hooker won five Pac-10 titles, two at 100 meters, a pair at 200 meters and one in the 4×400-meter relay. A 10-time All-America, Hooker won the NCAA Indoor 55-meter run in 1998 and nine times scored points in NCAA championship events. Hooker scored three touchdowns for the football team, including an 89-yard kickoff return TD in 1997 against Arizona.

JOE KEARNEY: Served as UW athletic director from 1969-76, a span in which he hired football coach Don James and basketball coach Marv Harshman. Kearney developed the idea of allocating prime-location seating in Husky Stadium to donors who contributed the most. Prior to joining UW, Kearney worked as a coach and administrator at several Washington high schools. After UW, he served as athletic director at Michigan State.

ANNA (MICKELSON) CUMMINS: Cummins lettered in rowing four times between 1999-02, earning a host of Pac-10 and All-America honors, including 2002 first-team All-America. She was part of an eight that in 2000 won the Henley Women’s Regatta on the River Thames. Following her UW career, Cummins won a silver medal in eights at the 2004 Olympics in Athens and a gold in eight at the 2008 Olympics in Beijing. She is a 2014 National Rowing Hall of Fame inductee.

DAVE WILLIAMS: As a football player, Williams made second-team Associated Press All-America in 1965 and honorable mention All-America in 1966. As a tight end, he set records that lasted more than 40 years (until Austin Seferian-Jenkins broke them) and still holds UW’s single-game record for receiving yards, 257 against UCLA in 1965. Williams, who qualified for the U.S. Olympic decathlon trials as a freshman, was a four-time track All-America, primarily as a hurdler. A No. 1 draft pick by the St. Louis Cardinals, Williams played seven seasons in the NFL. He was the first player signed by the Seattle Seahawks.

2008 WOMEN’S CROSS COUNTRY TEAM: After posting the first and only perfect score in the history of the Pac-10 Championships, this team dominated NCAA competition, winning all six races to give UW the first national championship in program history. Coached by Greg Metcalf, the team featured five All-Americas: Christine Babcock, Katie Follett, Mel Lawrence, Amanda Miller and Kendra Schaaf, the Pac-10 Athlete of the Year.