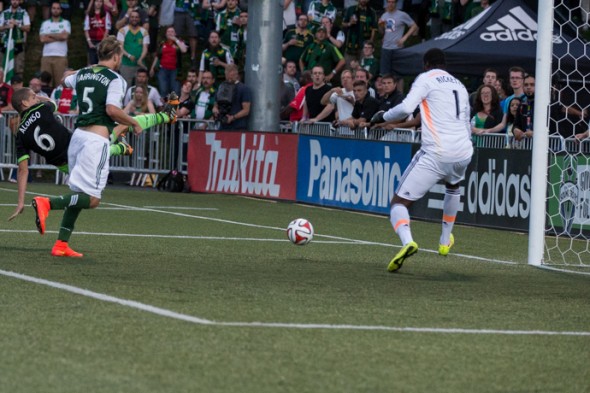 Osvaldo Alonso scores the first goal for the Sounders Wednesday against Portland at Starfire in Tukwila. / Drew McKenzie, Sportspress Northwest

TUKWILA — It took extra time in a Starfire Stadium darkened by a partial power outage, but the Sounders finally prevailed 3-1 over the Portland Timbers Wednesday night in a U.S. Open quarterfinal match. The Sounders will play the Chicago Fire in an Aug. 13 Open semifinal at Starfire.

Things looked good for a 1-0 win in a regulation until Portland’s Darlington Nagbe worked a give-and-go with Steve Zakuani, the ex-Sounder, for a score in the final moment of the 93rd minute. That forced two 15-minute periods of extra time for teams that will meet again Sunday at the Clink in MLS action.

Six minutes into extras, the Timbers went down a man when Diego Chara was red-carded. With a two-footed takedown from behind of Marco Pappa, Chara was ejected and Portland played the rest of the way with 10.

in the 108th minute, Gonzalo Pineda sent a kick high toward the goal that Kenny Cooper headed past keeper Donovan Ricketts. Seven minutes later, Pappa drained the remaining drama for the 4,233 on hand with a long possession that concluded from the top of the area with a right-footed bullet for which Ricketts had no chance.

The Sounders improved to 13-0-1 at Starfire and will make their sixth appearance in the Cup semifinals.

The first score came in the 69th minute when Osvaldo Alonso accepted a long cross near the far post and made a leaping swing of his left leg that sent the ball into the back of the net. It was his first score of 2014.

In a bit of a surprise, DeAndre Yedlin made a successful return from the World Cup with a start. Fellow USMNT member Clint Dempsey is due to return to Seattle Thursday and will be available Sunday, as will Obafemi Martins, who sat out Wednesday with a sore hamstring.

Wednesday was the sixth time that the Sounders have played back-to-back MLS and Open Cup matches against the same opponent. They swept Houston and D.C. United in 2009 and Dallas in 2011, got a win and a draw with Colorado in 2009, and split with Los Angeles in 2010.