Thiel: Mariners are tweeners, but have to go for it

Mariners close first half with a 4-1 loss to A’s Sunday, but take the series and further the idea that with another veteran hitter, they are playoff quality. 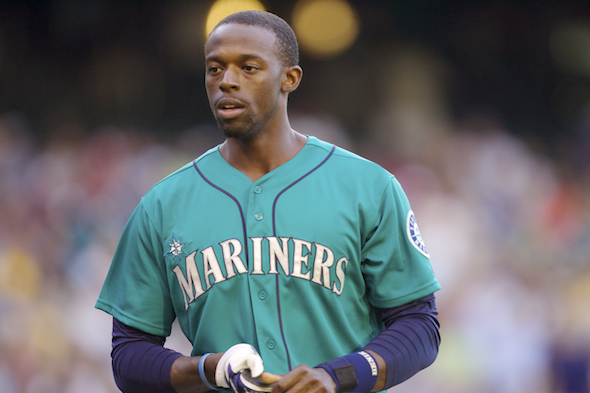 James Jones is the one surprise contributor to the Mariners’ offense. / Drew Sellers, Sportspress Northwest

Dull thud Sunday aside, the Mariners have worked themselves up a half-season of credibility. They are 7-6 against the Oakland A’s, 26-21 against the American League West and 25-14 against teams that were .500 or better when they played. At 51-44, the Mariners have the AL’s fifth-best record and have four players in the All-Star Game in Minneapolis Tuesday.

So why is there apprehension amid elation?

The simple answer: It’s the Mariners. Twelve years absent from the playoffs for no particular reason, ownership and management have allowed cynicism to rot the fan base. The default position, despite some evidence to the contrary, is, at minimum, skepticism.

But a more nuanced answer was visible in the weekend series with the Oakland A’s. In losing 4-1 Sunday and missing the chance for an eyebrow-raising sweep of the team with MLB’s best record (59-36), the roster remains imbalanced, as it has for years. The gigantic investment in Robinson Cano has been a half-season success, but the failure to support the investment invites the apprehension.

Now, losing to the A’s, who have seven All-Stars, and starting pitcher Sonny Gray, who could have been No. 8, is hardly a cause for dismay. Gray was 3-0 with a 1.44 ERA in four career starts against Seattle, and Sunday improved those numbers with no earned runs and a mere six hits surrendered. He’s allowed nine earned runs in his past 33 innings.

Seattle’s starter, Chris Young, was again credible, with three runs in six innings, but he was a victim of the Mariners’ minimal margin for error, which in this game was represented by an 0-for-12 cumulative number for the final four spots in the order — Justin Smoak, Dustin Ackley, Brad Miller and Mike Zunino.

It is that quartet’s lack of production that is the Mariners’ continuing vulnerability. At least Zunino has delivered some power (13 homers, 34RBIs). The other three aren’t helping much.

The Mariners this season have found one unforecasted solution among position players — rookie CF James Jones. Sunday, he ran himself into the Mariners’ only run when he singled in the first, then induced an error from Gray, whose errant pickoff attempt gave Jones two more bases, from where scored on an infield dribbler by Cano.

He’s hitting .287, playing an above-average center field and seems to have exhausted the Mariners’ supply of 2014 serendipity. No other position player in the system will be more than a patch.

So that leaves the non-waiver trade mart. As has been offered here and elsewhere for weeks, the Mariners need to trade prospects for a veteran hitter to solve for one among Ackley, Smoak and Miller.

But at what cost? The Mariners have some young pitching to trade. So do a lot of teams. The system is not that deep; the position guys who can play now are nearly all in Seattle. High-end prodigies D.J. Peterson and Alex Jackson should not be sacrificed for anyone.

Given the modest pickings in the trade mart and the Mariners’ modest offerings, the question becomes: Is this the summer to go for what will be, at best, an entry into a one-game, wild-card playoff?

The call is close, but for me remains unchanged: Take the risk. The Mariners have established that, in a parity-festooned league, they can hang with any opponent, and feel good about winning at least two in a playoff series with Felix Hernandez and Hisashi Iwakuma.

It’s true that this weekend the A’s were missing injured stalwarts Josh Reddick, Coco Crisp and Alberto Callaspo, and have three good pitchers on the disabled list: A.J. Griffin, Jarrod Parker and Drew Pomeranz. GM Billy Beane knows he has command by his bold trades for starting pitchers Jeff Samardzija and Jason Hammel.

But the Mariners don’t have to play the A’s in seven games now; they have to get there. The Mariners improve those chances significantly with Marlon Byrd, Alex Rios or another serious corner outfielder. Here’s a look at the marketplace.

As to the consequences for the future in trading prospects, it is balanced somewhat by improved prospects in off-season free agency with actual proof that neither ownership nor Cano were nuts in believing a contender in Seattle was imminent.

It can be argued that the Mariners in one season can’t reasonably be expected to make up all the ground from 71-91 to the playoffs. But the Mariners (51-44) have won 50 or more games by the All-Star break only five times. In a race where no one is dominant and the Texas Rangers are a one-season injury debacle, they have little choice but to seize the day because they have assembled the pitching and defense of a playoff team.

Young, the Mariners starter, echoed manager Lloyd McClendon Sunday when he said, “Our best days are ahead of us.” Maybe. What else would they say?

Still, all it would take would be the guts to act on management’s belief in acquiring Cano: That he was the one to put them over the top. He’s done his part. The bosses have done theirs . . . almost.