No doubt: Felix Hernandez was named to start for the American League in the All-Star Game Tuesday in Minneapolis, a first-time honor for the Mariners’ star. 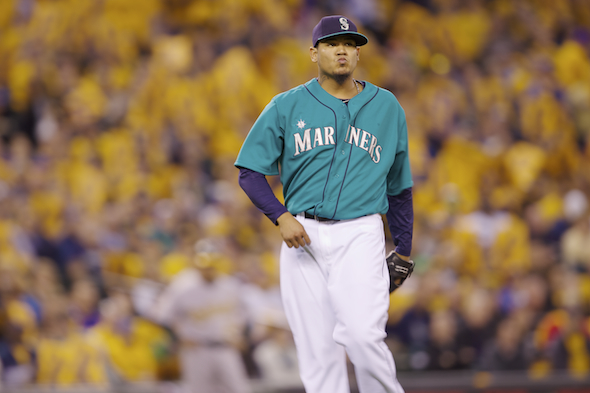 The choice was obvious, and John Farrell made it official Monday: Felix Hernandez will be the American League’s starting pitcher Tuesday at the All-Star Game in Minneapolis.

“There are many deserving candidates to be the starter of this team,” Farrell, the Red Sox manager, told reporters at a Target Field press conference. “But given what he’s done over his long successful career, what he’s doing this year, it’s an honor to name Felix our starter.”

It’s the first such honor for Fernandez, 28, in five All-Star appearances, and the first for a Mariners pitcher since Randy Johnson in 1995 and 1997. His major competition for the honor, Masahiro Tanaka of the Yankees, is out with an elbow injury.

At the All-Star press conference, the Mariners’ ace, beaming, expressed his gratitude.

“It’s an honor to be here to be part of this,” he said. “It’s always. I’ll just have to go out there and do what I have to do — throw zeros out there and help my team to win.”

In his past 11 starts, he pitched seven or more innings and allowed two or less runs, the longest streak during a season of such starts since Gaylord Perry in 1974. In those 11 starts, Hernandez is 7-1 with a 1.48 ERA.

He also took great pride in becoming the first starting pitcher from his native Venezuela.

“To be the first Venezuelan guy, it’s something special,” he said.

The National League starter will start Adam Wainwright of the St. Louis Cardinals.