Felix Hernandez, who will start for the American League in the All-Star Game Tuesday night, has the best opponent OPS (.520) at the break in franchise history. 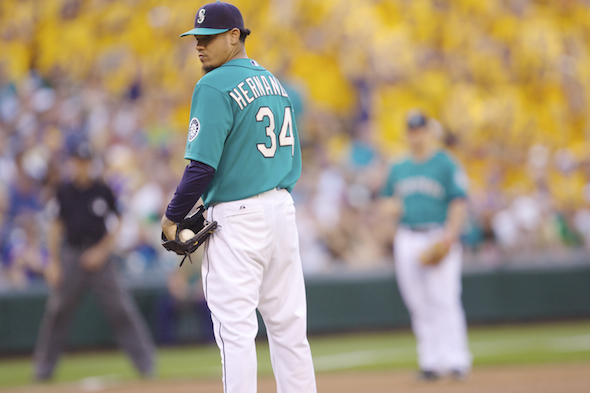 Felix Hernandez (11-2, 2.12) put together the greatest first half by any pitcher in Mariners history. / Drew Sellers, Sportspress Northwest

Felix Hernandez starts for the American League in the All-Star Game Tuesday night after reaching the break with a record of 11-2, 2.12 ERA, 0.91 WHIP. This is the first time in Hernandez’s 10-year career that he has had as many as 11 wins at the break. He is the first Seattle starter with 11 or more since Jamie Moyer won 12 and Joel Pineiro 11 in 2003, the last year the Mariners produced a 90-win season (93-69).

Hernandez arrived at 11 wins with an historic streak in play after the All-Star Game. In his past 11 starts, Hernandez pitched at least seven innings while allowing two or fewer runs. This is the longest single-season streak of its kind by an American League pitcher since Cleveland’s Gaylord Perry produced 11 in 1974.

After the break, Hernandez will have an opportunity to exceed the only two longer streaks. Between July 17-Sept. 16 1971, Tom Seaver, a future Hall of Famer, had 13 consecutive starts. Mike Scott had 12 between May 17-Juy 7, 1986, en route to the National League’s Cy Young Award.

Neither Moyer nor Pineiro – or Randy Johnson or anyone else – posted a better first half for the Mariners than the one Hernandez completed. There are lots of ways to slice/dice the comparisons – opponent BA, WAR, WHIP, OPS – but we’ll go with OPS or, more appropriately, OOPS – opponent on-base + slugging vs. Hernandez. Using OOPS, these are the best first halves by Seattle pitchers:

On this list, Hernandez ranks No. 1 in first-half ERA, first in keeping runners off base (OBP) and opponent slugging percentage, and second in opponent batting average. Hernandez’s 2010, his Cy Young year, isn’t even a part of the list.

Hernandez’s rank among Seattle pitchers also plays well vs. the best first halves by all major league pitchers. Since Hernandez entered MLB in 2005, only two pitchers produced better pre-All-Star break numbers. Since 1977, when the Mariners played their first season, Hernandez’s first half ranks sixth on a list of 10, using the same OOPS standard:

Randy Johnson won four National League Cy Young awards for Arizona between 1999-02 and he’s not on the list.

Added to the All-Star team as an injury replacement for Toronto’s Edwin Encarnacion, Kyle Seager made a one-man argument in the first half that Safeco Field is not the bane for hitters that it’s advertised to be. Seager hit his 13th Safeco home run Saturday in Seattle’s 6-2 victory over Oakland and is eight shy of the single-season record of 21 by Richie Sexson in 2005. He’s also four shy of the record for a left-handed hitter, 17 by Raul Ibanez in 2006 and 2013.

If Seager has the kind of second half that he did in the first, he could become the first Mariner with a Safeco OPS above 1.000 for a single season. Best single-season OPS marks at Safeco Field with Seager shown for comparison purposes:

Buster Posey and Madison Bumgarner of San Francisco Sunday became the first pitcher and catcher to hit grand slams for the same team in the same game, an 8-4 Giants’ win over Arizona.

The Mariners have hit 84 slams in 38 years, but only once did they crack two in the same game. On Aug. 8, 2000, Jay Buhner hit one off Jon Garland in the third inning and Edgar Martinez followed in the eighth off Bill Simas in a 12-4 win over the Chicago White Sox at Comiskey Park.