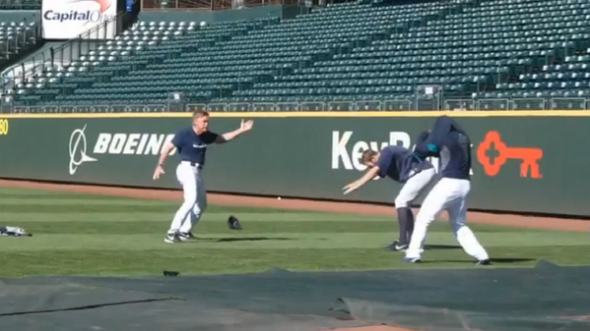 The most consistently successful part of the Mariners enterprise has been their annual set of TV commercials that use the most popular players and coaches in 30-second skits that border on the bizarre.

So if you’re the type who likes Larry Bernandez almost as much as Felix Hernandez, the 2014 Mariners seemed have topped the scripted skit with the unscripted: “Dancing with the M’s.”

In the hours before the game and fans happened at Safeco Field Wednesday against the Twins, relief pitcher Tom Wilhelmsen was moved to move to DJ Snake and Lil Jon’s “Turn Down the What” on the stadium’s sound system.

Not to be outdone, pitching coach Rick Waits did . . . something. It might be dancing. Feel free to decide.