The Mariners have a winning record against teams with records above .500, but a losing mark against teams that have played below .500. 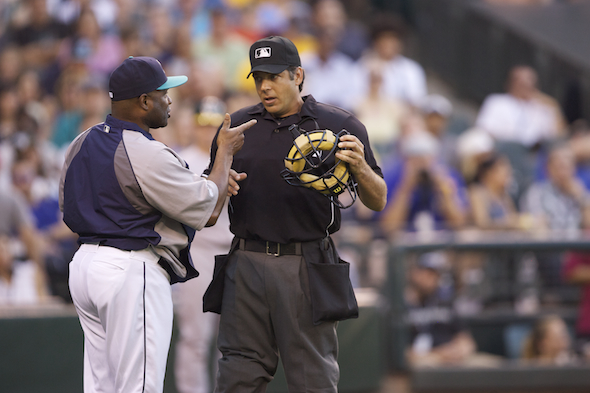 Manager Lloyd McClendon is presiding over the most interesting Seattle Mariners team in a decade. / Drew Sellers, Sportspress Northwest

That count omits the five losses the Mariners sustained during their season series with the lowly, but rising, Houston Astros, a team that recently moved into fourth place in the AL West due to the once-formidable Texas Rangers dropping eight in a row and 14 of 15.

Seattle GM Jack Zduriencik, who has roughly two weeks to make a deal or deals prior to the July 31 non-waiver trade deadline, is likely attempting to puzzle out exactly what kind of team he presides over, and whether it is in the franchise’s best interests to mess around this year with the team he’s built.

Zduriencik has to be encouraged that the Mariners hang with better teams, but flummoxed that they give away games to losing clubs. The Mariners are the only one of the five American League teams holding a playoff position that has a negative record against losing teams. None of the five National League teams in a playoff spot sport losing records against losing clubs.

To make Zduriencik’s decision to add a starting pitcher or a right-handed bat more complicated, the Mariners are 15-10 against AL clubs that would make the playoffs if they started today, including 7-6 vs. AL West-leading Oakland, 6-3 vs. the L.A. Angels and 2-1 vs. Central-leading Detroit (the Mariners have yet to play AL East leader Baltimore).

Add Seattle’s 2-0 interleague mark against NL East leader Atlanta, and the Mariners are 17-10 against teams occupying playoff spots. Their .629 winning percentage, in fact, ranks second among clubs that would be playoff teams if the season ended today. The 10 current playoff teams vs. each other:

Post All-Star break, the Mariners play 31 games against clubs that occupy playoff positions and 36 vs. clubs that don’t. Ten of the 31 are against the Angels with seven against the Athletics.

The following are American League wild card teams since 1995 with the lowest OPS numbers, and their league ranks. The Mariners are included for comparison purposes:

Add it up: As the second half starts, the Mariners are a bubble playoff team with intriguing possibilities if they reach the postseason. But if Zduriencik doesn’t made a deal for a starting pitcher, or a right-handed bat, or both, the Mariners will probably waste what is shaping up as their most interesting club in a decade.