One-time Sonic Kevin Durant has a new endorsement contract with Sparkling Ice, a Seattle-area company whose zero-calorie drink is, well, the Durant of sparkling water. 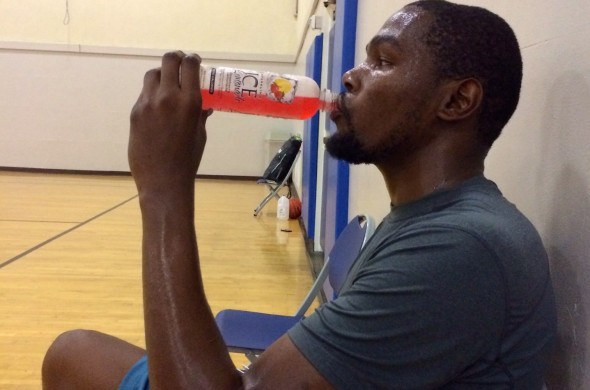 But at least he’ll be around to drink to the town’s, and his, success.

A local company, Talking Rain, has signed Durant to be the first big sports endorser of its hit product, Sparkling Ice, a zero-calorie carbonated water drink that is one of the fastest growing beverage brands in the U.S.

CEO Kevin Klock was called by Roc Nation and said a group was coming to Seattle for the Mariners home opener. He was told Durant loves the drink and the company. Interested in talking?

“Kevin’s deal with Gatorade was over, and he didn’t have a beverage contract,” Klock said this week. “We hadn’t pursued any endorsers because it’s important to us to be authentic. We wanted someone who is already a customer.

“We didn’t want a deal where the guy says he likes the product, then the TV lights go off, and he hangs it up.”

Klock agreed to meet Durant at the Western Conference finals with the San Antonio Spurs. He learned Durant tweeted about Sparkling Ice and offered the drink at his restaurant in Oklahoma City, and also still cared about the place where he spent his first NBA season in 2007-08 before the Sonics were hijacked to OKC.

“He lived on Mercer Island and loves Seattle,” he said, “and he was one of the most humble pro athletes I’ve ever been around.”

Durant, who won’t be 26 until September, seems to have found a kindred spirit in Sparkling Ice.

“I’ve always challenged myself on the basketball court, but this offseason is really the first year I’m challenging myself off of it — on the business side,” Durant told espn.com. “This is a brand I drink every day that I love and I wanted to be a part of it. I want to help them get to the next level.”

Sparkling Ice has gone from $25 million in sales to expected revenues of $500 million in 2014. Their offices and bottling plant are in Preston, halfway between Issaquah and North Bend along I-90. The privately held parent company, Talking Rain, had its 25th anniversary in the market in 2012, and now has five plants around the country.

Talking Rain last year was named company of the year by the beverage industry, and Klock was named the industry’s person of the year.

Klock comes by his basketball knowledge legitimately. An Oregon State grad, Klock was a year behind Beavers’ star Gary Payton, who became the Sonics’ No. 1 draft choice (second overall)  in the 1990 draft and went on to do reasonably well in his 13-year Sonics career. Klock was a huge fan.

“I remember we were getting crushed by USC until Gary went for something like 50 points,” Klock said. “For me as a college kid, he was the best. He was such a great trash talker, but he backed it up. Always.”

Now Klock has hooked up with Payton’s personality opposite. Durant’s low-maintenance manner and sincere demeanor has won over many non-hoops fans as well as those admirers of his play.

Durant’s hallmark moment so far may have come off the court at his acceptance speech for the NBA Most Valuable Player Award, where his words left nary a dry eye.

Now, he’s in position to recommend how to rehydrate.

Said Klock: “Maybe someday he’ll be in position to help us bring back a basketball team.”