22,000 showed up to Safeco Field Sunday, paying from $29 to $382 a ticket, to watch Sherman, Seahawks teammates and Kobe Bryant cavort for charity. 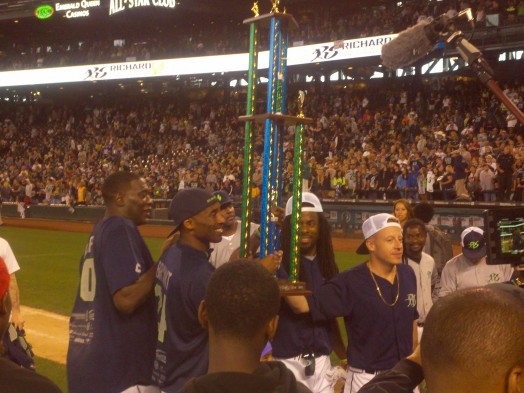 The Seahawks cornerback-turned-cultural-phenomenon drew a raucous crowd of 22,000 to Safeco Field on misty Sunday afternoon for a celebrity charity softball game. The Mariners average 23,858, although it’s not a fair comparison — Sherman’s blue and gray teams hit better.

His influence was sufficient to draw many of his teammates, a few Seattle legends such as  Shawn Kemp and Gary Payton and newbie local icons like Macklemore and Chris Hansen. Sherman even managed to charm Kobe Bryant to town from his perch atop the athletic cosmos.

The Lakers superstar said before the event that there’s something about Richard.

“He’s a psycho like me,” Bryant said, smiling. “I think it’s just mutual respect and I have a great amount of respect for people who work at their craft. When him and I met, we just talked and hit it off.”

It’s hard to say whether Sherman’s play, his back-story or his rant on national TV after the NFC Championship is mostly responsible for unleashing the double wave of popularity and controversy washing over him. But Seattle sports has seen nothing like him since Ken Griffey Jr., and Sherman embraces the attention more than Griffey ever did.

“I respect these guys tremendously and it’s humbling — it’s not something you can put into words,” Sherman said at a pre-event press conference. “You don’t wake up one day and be like, ‘I’m going to have Kobe Bryant, Nate Robinson, Lawyer Milloy playing in my softball game, and Macklemore.’ It’s something that happened and you’re numb to the feeling until like, years later, when you realize that was a pretty incredible event.”

The second annual event grew up quickly from the first at Cheney Stadium in Tacoma, which sold out its 9,600-seat capacity. And that was before Sherman became part of President Obama’s comedy routine at the White House correspondents dinner.

Clearly, Sherman needed a bigger boat, so he rented the largest ballpark in the five Northwest states.

The beneficiaries are Sherman’s Blanket Coverage Family Foundation and other local charities who supply under-privileged, school-age kids with clothes, backpacks, computers and athletic shoes “to even the field,” as Sherman put it. As a kid from Compton who made it to Stanford, he’s keenly aware of class distinctions and the negative vibe it creates.

Once he had the yard, people were next. As an almost completely filled lower bowl indicated, it wasn’t too hard, even for ticket prices ranging from $29 to $382.

People in Seattle love the Seahawks, and this was a chance to see them helmet-free and giggling, while demonstrating there’s a reason they play football and not baseball. All except for Milloy, the 15-year NFL defensive back, and Seahawks QB Russell Wilson demonstrated the game’s overt and covert skills, even disguised as softball, were elusive.

Milloy and Wilson showed why they were college baseball players good enough to be drafted as pros. Milloy was chosen by Cleveland out of Tacoma’s Lincoln High School as a pitching prospect, and out of the University of Washington by Detroit in 1995 in the 19th round. Wilson was taken as an infielder in the fourth round in 2010 by the Colorado Rockies and played two minor league seasons.

Milloy was named the game’s Most Valuable Player after hitting three home runs beyond the shallower, temporary fences for softball. And Wilson had the longest jack, a homer that hit about five feet up on Safeco’s regulation wall in left. During batting practice, he deposited three in the bullpens.

Wilson and Sherman drew the loudest ovations in introductions, although the elders appreciated seeing Kemp and Payton too. Kemp gets credit for the game’s savviest play. After former Seahawks cornerback Brandon Browner hit a two-run triple, Kemp, the third baseman, pretended the throw got away from him. Browner popped up and ran for home, only to be nailed in a rundown after Kemp produced the ball from his glove.

But as always, Sherman had the last word. After hitting a two-run double to tie the game at 17, Sherman was deked for the third out by Wilson’s own hidden-ball shenanigans at second. But as the teams headed for the dugout, Sherman complained that there was a second ball in play that he regarded as the game ball.

Much hilarity ensued as Sherman, with stadium cameras and mics upon him, argued that the game should resume with him on second. His chief antagonist was a member of the Grays, Doug Baldwin, his Seahawks teammate and fellow Stanford grad who enjoys climbing in Sherman’s grill — particularly after Sherman robbed Baldwin of a home run with a leaping catching in center.

Finally, the dispute was settled the traditional way: Paper-scissors-rock. Richard of the Blues against his brother, Branton, of the Grays.  Richard won.

But the best words came from Bryant pre-game. He answered a question about his favorite football team, in the absence of the NFL in LA, by saying the Eagles of his boyhood home in Philadelphia, where his dad, Joe, played for the 76ers. He could have said the Seahawks, but explained, “I’m about 80 years old in NBA years, so I don’t worry about being politically correct.”

But then he offered a makeup call. Saying this was his first visit to Seattle since the Sonics left in 2008, and the first time he had picked up a bat in 20 years.

“I’ve always enjoyed coming here — it’s a beautiful city,” he said. “I’d much rather come here in the postseason than Oklahoma.”

And then, on his first plate appearance, left-handed, he hit a home run.

For words and deeds, Sherman, you have an aspirational target.