Herb Simpson, 93, returns this weekend to Seattle, where he played for the Negro Leagues’ Steelheads for their two-month lives in 1946. 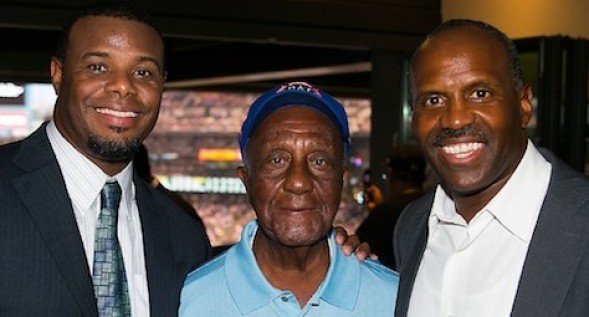 NEW ORLEANS — During the summer of 1946, Herb Simpson and his fellow players in the West Coast Negro Baseball League lined up against perhaps the greatest U.S. Olympian of all time.

When Jesse Owens would put on exhibitions of his still-blistering speed as a promotion during WCNBL games, he’d always give the league’s players — the ones with the gumption to race him, anyway — a 10- or 15-foot head start in the 100-yard dash.

But for Simpson, one of the league’s speedier athletes, Owens would only give a five-foot spot, for good reason.

“I’d end up right there with him at the finish line,” Simpson says now, chuckling at the memory. “We were right there side by side. He thought that was great.”

As he sits on his porch at a house he has owned and lived in for 60 years in the Algiers section of his native New Orleans, Simpson recalls how friendly and warm Owens was to him and other players in the short-lived West Coast African-American loop. He says Owens would frequently buy the players soft drinks and cookies.

Simpson, fresh out of the service when he got a call from Chicago sports impresario Abe Saperstein — best known as the owner of the Harlem Globetrotters hoops team but also a baseball promoter — to join the Seattle Steelheads entry in the WCNBL, the Big Easy resident was more than a little curious and decided to take the plunge,  taking up Saperstein on the offer.

In addition to acting as the league’s commissioner, Saperstein also owned the Seattle franchise, while Owens served as the circuit’s vice-commissioner and owner of the Portland entry, the Rosebuds. Although the WCNBL didn’t last very long — barely two months, in fact — thanks to underwhelming attendance and travel issues, the Steelheads stamped an indelible impression on the city’s sports history. (Wayback Machine: Seattle Steelheads’ Short Life)

Because of that, Simpson, for the second year in a row, will be honored during an on-field ceremony during the Mariners’ annual African-American Heritage Day celebration Sunday. The 93-year-old Simpson, the last known surviving member of the Steelheads and one of the handful of WCNBL players still alive, will throw out one of the first pitches and be recognized for his contributions to baseball history in general and African-American hardball heritage specifically.

Simpson is being hosted by the Mariners RBI Club booster organization, led by the efforts of members Bob Simeone, Lorri Ericson and Pete Bellmer.

“Herb is special, because he is so genuine and quickly becomes a friend you feel like you’ve known forever. Unlike some sports heroes of today, he is humble, unassuming, grateful for any privileges he receives and gladly willing to share as much time and as many pieces of history as you would like him to.”

Simpson’s family members in New Orleans, including niece Lisa Broussard, are thrilled that the Mariners hold Simpson in such high esteem.

“It’s an absolutely incredible experience for (the Mariners) to be honoring him,” she says. “The Negro League players were the forerunners for all the African-American players who got the opportunity to play (in the majors) after the racial barrier was broken.

Saperstein, Owens and the other investors and promoters of the WCNBL, had high hopes for their creation, banking on the hope that the influx of African-American labors from the South to the Northwest would lead to surging attendance at league games and, correspondingly, financial success.

Simpson says the Steelheads were built for on-field success, especially because their skipper, Paul Hardy, was a seasoned veteran of the black ball world and a gritty manager.

The wizened New Orleans native says Hardy slotted Simpson, who mainly played first base, in the cleanup spot for most of the Steelies’ run.

Simpson also has only good things to say about Saperstein, the Steelies’ owner, who he says treated his players extremely well.

Unfortunately, the hoped-for revenue never happen for most of the league’s teams, and after an auspicious mid-spring 1946 launching — the Steelheads split a doubleheader with the Oakland Larks in their opener — the circuit petered out by July of that year. Simpson, for one, was disappointed that the WCNBL, including the Steelheads, never got off the ground.

“I thought the league would last longer than that,” he says wistfully.

The WCNBL’s folding left its member teams to either disband or morph into barnstorming aggregations. The Steelheads, for example, ventured as far as Flint, Mich., where they clashed with a local all-star team. The Steelies then crossed bats for a multi-game series with the Havana LaPalomas touring aggregation.

Fortunately for Simpson, Saperstein decided to take the bulk of the Steelheads roster and transform the squad into a the baseball edition of the Harlem Globetrotters. That evolution lead to a lengthy tour of Hawaii and other barnstorming adventures for Simpson and his teammates.

Several years later, Simpson returned to Washington to play for the minor-league Spokane Indians, who needed players desperately after a fatal bus crash tragically killed numerous members of the team.

Simpson stayed with the Indians for several months, but when it became obvious that the Spokane team was going to use him only as a backup, and because the chilly, rainy weather in the city wasn’t to appealing to a man of the South, Simpson shifted to the Albuquerque Dukes, where he integrated both that team and the West Texas-New Mexico League.

Because of his lengthy connections to Washington, Simpson will also be recognized by the Everett AquaSox during the Single-A team’s annual Turn Back the Clock Night Saturday.

Although Simpson is a humble man of few words, he remembers his time with the Steelheads clearly, and, especially when he returns to the city, has only fond memories of Seattle and its people.

Ryan Whirty is an award-winning freelance journalist and member of the Society for American Baseball Research. He can be reached at rwhirty218@yahoo.com, and his blog on the Negro Leagues is at homeplatedontmove.wordpress.com.