Marshawn Lynch to hold out of Seahawks camp

Marshawn Lynch confirmed to former teammate Michael Robinson that he will be a no=show when the Seahawks begin their training camp Friday in Renton. 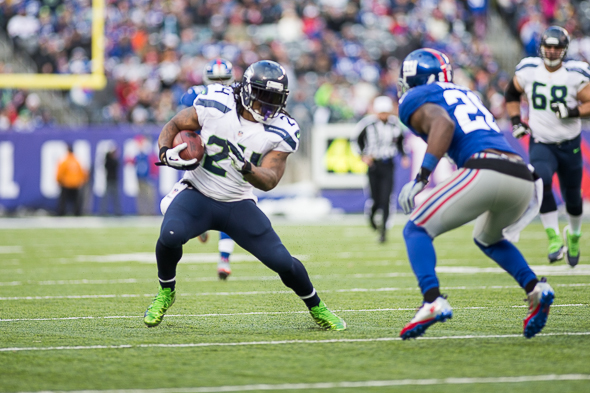 The Seahawks’ offense runs through Marshawn Lynch and now he wants more money for that. / Drew McKenzie, Sportspress Northwest

“Marshawn Lynch just called me, we just talked,” Robinson told the network. “He said he will be holding out from training camp this year with the Seahawks.”

Lynch, who famously skipped the ceremony when the Seahawks were honored at the White House earlier this year, faces a $30,000 fine for every day he sits out.

The Seahawks, who defeated the Denver Broncos 43-8 in Super Bowl XLVIII, are scheduled to open training camp Friday at the Virginia Mason Athletic Center in Renton.

Lynch threatened to skip a mandatory mini camp in early June in order to force the Seahawks into granting him a contract extension. Lynch is entering the third year of a four-year deal worth $30 million that he signed in 2012, including $6 million in signing bonuses. His base salary for 2014 is $5 million and counts $7 million against the salary cap.

Lynch ultimately showed for the three-day mini-camp, although he did not participate in drills, supposedly hobbled by an ankle injury. By appearing, he avoided approximately $70,000 in fines.

Lynch, who is slated to earn $5.5 million in 2014, when his salary will count $9 million against the cap, wanted the Seahawks to renegotiate the deal and provide him with more up-front money.

Since the Seahawks won the Super Bowl, they have handed out two major contracts, a four-year package to cornerback Richard Sherman worth $56 million, and a four-year, $40 million deal to S Earl Thomas. Both players became the highest-paid at their positions in the NFL. Both were scheduled for significant raises. Lynch is not.

The Seahawks also lost a number of high-profile players in free agency, including WR Golden Tate and DE Red Bryant, in order to free money to sign Sherman and Thomas and prepare for the inevitability of having to pay Russell Wilson after the expiration of his rookie contract next year.

In mid-contract and not in position to cash, Lynch’s only leverage, such as it is, is to hold out. He reportedly fears that he will never see the $5.5 million due him in 2015. If Lynch,  28, honors his current deal, he will be 30 the next time he is free to negotiate an extension. He is more likely to become a salary cap casualty before that, meaning that the $5.5 million due him in 2015 might as well not exist.

The man question now is whether the Seahawks are prepared to play hardball with one of their most popular and productive players.