Hunt is on for evidence of Super Bowl hangover, a natural reaction after ultimate success. But Richard Sherman and assistant coach Ken Norton explain why it won’t happen. 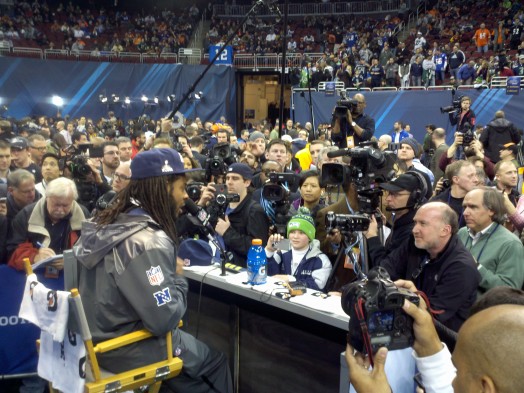 Richard Sherman held a national audience in thrall during Super Bowl week. Can he get back to business? / Art Thiel, Sportspress Northwest

RENTON — From the 2,500 Twelves perched daily upon the VMAC berm to the televised punditocracy in Bristol, Los Angeles and New York, all binoculars and microscopes are trained on the Seahawks to spot some symptom of the dreaded Super Bowl hangover.

Lethargy. Inattention. Narcissism. Fatigue. Jealousy. Chubbiness — whatever factors have prevented previous NFL champions from keeping their edge and defending their title is up for scrutiny.

Richard Sherman — a likely candidate for examination because he has advanced to millionaire global personality faster than Miley Cyrus or Luis Suarez, but for better reasons — has a term for taking the safer route after the championship has been won and riches acquired.

“You see some guys who, they say, make ‘business decisions,'” he said after practice Sunday. “You don’t dive for the ball. They don’t take that hit. They turn down this play and they turn down that play.

“I don’t constantly think about any of those things.”

Sherman, as do all of his teammates, speak with certitude about avoiding “business decisions” that avert the more dangerous plays for safer ones, which compromise the ruthless edge that defined the Seahawks the past couple of seasons.

Most infamously in Seahawks history, RB Shaun Alexander, after getting his big contract following Seattle’s first Super Bowl appearance in 2006, made “business decisions” to go down after first contact, or out of bounds, to stay healthier. To many lamentations from the Twelves.

What the Seahawks are saying is that they will be better able than most to resist a fundamental behavior in human nature.

“Within myself, I see myself still hustling for balls,” he said. “You still chase balls, you still dive, you still go after them just like you always have . . . I just think about making many new plays, and make sure I was doing my job correctly.

Actually, no. Training camp is only three days old, and Sunday was the first in pads, so we haven’t seen what choices are made by defensive backs in the cross-hairs of a tight end who outweighs them by 80 pounds, or what happens to a wideout in a crossing pattern certain to have, upon reception, a delivery of sore ribs.

Those observations can be made on fall Sundays when everything counts. That’s when the flinch sets in.

At the moment, it’s only words. To that end, however, linebackers coach Ken Norton Jr. has some words that seem relevant. Besides having been an assistant coach under Pete Carroll the past four seasons, Norton was a linebacker of All-Pro quality in parts of his 13 NFL seasons; one distinction is that he is the only player to have been a member of three consecutive Super Bowl-winning teams (Cowboys in 1992-93, 49ers in 1994).

Thriving under the tutelage of Carroll, Norton thinks he has reduced the mystery of sustained excellence to discernible parts.

“Starts at the top; you got have a strong man — disciplined, focused, high energy,” Norton said Sunday. “Pete is all that. He knows exactly what he wants, and he doesn’t waver. His foundation is clear to everyone. There’s no changing.

“As a (coaching) staff, we’re the messengers. He’s done a great job of letting us know what he’s about.”

Carroll has a very specific psychological profile he pursues in talent acquisition, and Seahawks fans in the first two years of his tenure, when he made hundreds upon hundreds of transactions, will attest to the thoroughness of his search.

“You got to have good football players who are alpha dogs,” Norton said. “Pete does a great job of finding players like that — guys who eat, sleep and think ball. It’s what they’re about.

“And they have to love practice. Practice is the one place where a player can develop. It’s paramount to our success.”

The coaches compile records of nearly everything relevant in order to create a baseline of performance. Should a player backslide, coaches will have specific explanations of what has happened.

“We don’t have (players who fall back),” Norton said, smiling. “But if we did, we show them. We show them here is where you are, and here’s where you showed us you could be.

“It’s about falling back to what you truly believe in. Whether you’re low or high, you still believe in who you are. You have to say, ‘I can’t wait to get out there and show people who I am.’ And that’s what we expect from players every time.”

The merit of the system was proven by winning the Super Bowl with the youngest roster in the game’s 48 years. The ultimate alpha dog, Carroll, assembled similar assistants and chose younger players who can sustain concentration play-to-play and game-to-game, unburdened by habits from other teams.

Naturally, the players think it’s doable. And at least a part of the optimism comes from alpha dogs like Sherman, who despite his sudden fame and fortune still seems to get his ya-yas from practice days like Sunday.

“I’m happy to get out here and play this kid’s game again and (get) the season going,” he said. “I think we spend our off-season waiting for this. We are just as excited as we were last year.”

Proof naturally awaits. But from a sunny day along Lake Washington, it’s possible to squint and see a path to a sunny February day in Phoenix.