A Clink clunker as Sounders play their worst

Down 3-0 before they had a shot on goal, the Sounders, who hadn’t lost at home since March, were helpless against the Galaxy in a stunner. 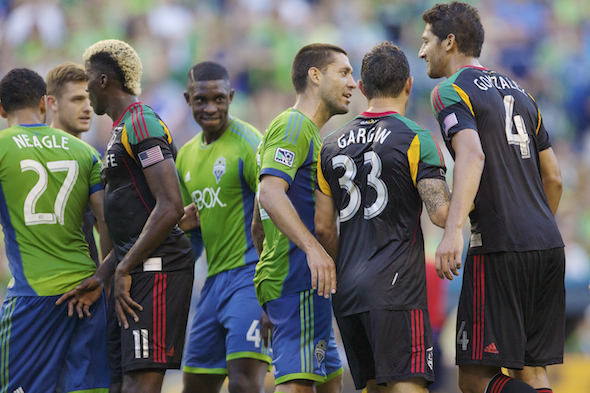 Coach Sigi Schmid promised “the real Monday Night Football” before the Sounders took on the Los Angeles Galaxy. But if that is an example of the Sounders’ response to the prime-time lights of national TV, they need to book noon Thursdays at old Memorial Stadium.

“One of the worst 45 minutes I can even remember,” according to Zach Scott, which didn’t begin to describe the desolation in the Sounders’ first-half play in which they didn’t get a shot on goal until after they trailed 3-0. The fact that that the score stood as the result was owed mostly to the drifting concentration of the snickering Galaxy stars as they smacked down the the best team and best home-field advantage in MLS.

“They were the better team,” said a chastened Schmid, seemingly too shocked to be angry. “It’s one of those days you try to forget and move on.”

What the Sounders seemed to forget, in the two weeks since their previous league game, was how to attack and defend.  The defense had one plausible rationalization: Chad Marshall, the MVP of the back line this season, was out with back spasms following an accident Saturday in which his car was rear-ended.

A sneeze Monday morning, according to Schmid, re-ignited the spasms and indirectly invigorated the Galaxy. They jumped on midfield turnovers with brilliant counter-attacks, none better than an eighth-minute score by Gyasi Zardes, who was at the end of a seven-pass buildup through the middle of the field that was unimpeded by the back-pedaling Sounders.

Entering the area, Zardes burst past Scott as Landon Donovan slid the ball forward for a virtual tap-in. In fact, all goals (Donovan in the 18th minute, Stephan Ishizaki in the 36th) were so unchecked that the suspicion was personal hygiene issues among the Galaxy were the sources of the distance Sounders defenders created.

Turned out the game was over at the first score, to the dismay of  a crowd of 39,304 on a glorious summer night as well as an ESPN2 audience that may have been intrigued by the gathering of stars in this matchup.

Instead, the Sounders (12-5-2), who had won six in a row at home by a cumulative 15-3 score, had no gumption for the fight, and this after three consecutive home clean sheets. It went down as the worst loss of the season, worse the 5-0 loss May 11 at New England, because that was on the road and Seattle at least had some scoring chances in that one.

Against the Galaxy, Clint Dempsey and Obafemi Martins were nearly invisible for a half as the Sounders failed at any kind of organized attack.

Indeed, the Galaxy won duels 59-43 and possessions by a similar 58 percent to 42, all much more lopsided in the first half.

“I think from top to bottom, there wasn’t a single guy who could say they played anywhere near their potential,” Scott said, genuinely angry. “But all I can do is look at myself from a personal standpoint, as a leader on this team and a veteran guy, regardless of who’s on the field . . .  you need to be able to hold the team together, specifically the defense. Letting in three goals is just ridiculous. I’m embarrassed.”

Then there’s Galaxy coach Bruce Arena, whose team struggled through a 2-3-3 start. He was delighted that his full lineup sent a noisy message nationally that the Galaxy (8-4-6) remains formidable.

“We’re just beginning to get our team on the field,” he said. “After a half a season of misery, having to deal with the injuries and the absences and all that, hopefully we’ll get a little bit more of a solidified unit. It was probably the first time they’ve played together this year.”

To thwart the top-scoring team in MLS was a point of pride for Donovan, the guy who made national headlines after being left off the World Cup team.

“Clint is one of the best, if not the best, player in the league and Obafemi has been great this year,” Donovan said.  “To keep them shut out is an excellent accomplishment. To keep them from having really any super dangerous chances is excellent.”

Not long after the game started, the stadium lights went out and the telecast went down for several minutes, reportedly due to an electrical surge in the neighborhood.  The plug on the Sounders, playing the first of eight games in 34 days, had already been pulled.