McCoy hurt; Schneider on Lynch: ‘Next man up’ 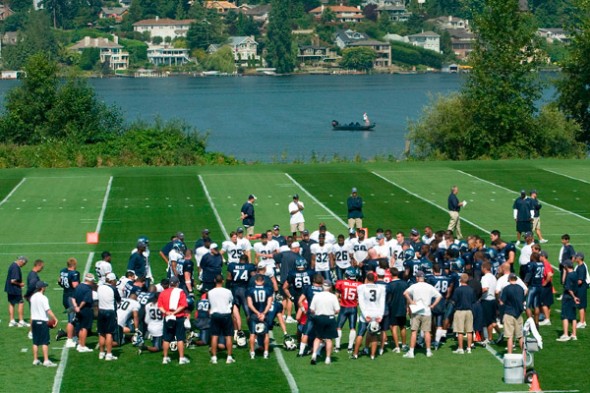 ESPN received unprecedented, inside-the-ropes access to Tuesday’s Seahawks practice and televised it live for nearly two hours, the Kenny Mayne-hosted telecast providing rare insight into how head coach Pete Carroll and his staff prepare players through intensive unit vs. unit and player vs. player competitions. No news was scheduled, but there was some, most of it bad.

When asked by Clayton if he is getting concerned about Lynch, who signed a $30 million deal two years ago and now wants it re-structured, Schneider said that the Seahawks are prepared for life after Beast Mode.

“Everybody loves Beast Mode,” Schneider said. “We love him and respect the guy. I think what he’s done in this community, for this franchise, is outstanding. It’s one of those deals where you can never get inside somebody’s head. We’re just going with our plan, and I know it’s cliché-ish, but . . .  next man up. We’ve had a plan in place here for a number of years, and we can’t veer from that plan for one person, because it’s the ultimate team sport.

“You make models two and three years out, and you have to stick to that and know that there’s going to be tough decisions along the way. We had to let guys like Red Bryant and Chris Clemons go. We weren’t able to sign Breno (Giacomini) and Golden Tate. You have to be able to make those decisions along the way knowing you’ll be able to re-sign Michael Bennett and maybe there’s a free agent that comes in and fits in your bracket.

“It’s just one of those deals where you know you can’t keep all of your players and you have to keep going about your business, and you can’t veer off of that. Around here we talk about what’s next, and the next person is up.

“Hey, Marshawn Lynch is phenomenal. Phenomenal player and just a unique part of what we’ve had going on here. Two years ago we were able to redo his deal, and he was a big part of that foundation that we started here.”

If Lynch watched the interview, he had to get the impression that Schneider, at least in his public comments, is starting to view Lynch as part of the team’s past – a message Schneider obviously intended to impart. Of course, Lynch could change his mind at any moment, realize the Seahawks hold all the cards, and cut his losses.

Analyst Jon Gruden, the former head coach who worked the Tuesday telecast alongside Mayne, was asked about Lynch’s holdout and what he would do if he found himself in Carroll’s spot with respect to Lynch.

Back at practice, ESPN took viewers through what Carroll calls “Competition Tuesdays,” an extensive variety of drills that pitted tight ends vs. linebackers, wide receivers vs. defensive backs, offensive linemen vs. defensive linemen, 9 on 7, 7 on 7, and much more. Carroll and his staff, as per custom, kept score.

“They’ll look at that on film as they assess their roster,” explained Gruden. “This is why coaches are in their offices until 11 o’clock at night. The Seahawks have a real good sense of purpose in what they do day in and day out.”

The player who most helped himself Tuesday was rookie wide receiver Paul Richardson, whom the Seahawks selected out of Colorado with their first pick in last spring’s draft. Richardson showed his speed, catching two long touchdown passes.

“This kid has a ton of talent,” Carroll said. “He’s really fast, has exceptional hands, and we’re excited about what he adds to the group.”

“One of the best position battles on this roster is going to be at wide receiver,” added Gruden. “Keep an eye on the young receivers. Paul Richardson can blow the top off things. But the biggest battle on the roster is at right tackle.”

Michael Bowie, expected to win that battle and replace Giacomini, who bolted to the New York Jets in free agency, is nursing a shoulder injury from the first day of training camp. Justin Britt, the club’s second-round draft pick out of Missouri, isn’t ready to start.