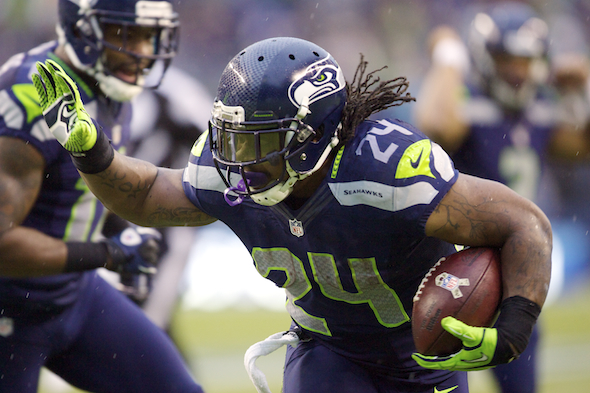 The Beast, apparently, is back. / Drew Sellers, Sportspress Northwest

Citing league sources, ESPN reported Thursday that running back Marshawn Lynch will end his eight-day holdout and report to the Seahawks within 24 hours. Also according to ESPN, Lynch will not receive the new contract he sought, but Seattle is expected to offer some financial concessions to his contract, perhaps by waiving the $30,000 per day in fines he has incurred.

The 28-year-old Lynch, who has two years remaining on a $30 million deal he signed two years ago, is scheduled to make $5 million this season and $5.5 million in 2015. He wanted some of that future money now as a guard against the Seahawks parting ways with him before he can collect the balance of his contract.

The Seahawks refused. Earlier this week general manager John Schneider made it clear the team was ready to proceed without Lynch, saying, “Next man up,” when asked if Lynch’s holdout concerned him.

Lynch has been the focal part of Seattle’s offense since he arrived in a trade from Buffalo in 2010. In four seasons, he has rushed for 4,624 yards and 41 touchdowns, including 1,257 yards and 12 touchdowns in helping the Seahawks to Super Bowl XXVIII.

NOTES: The Seahawks confirmed Thursday that TE Anthony McCoy tore his right Achilles tendon during Tuesday’s practice. That probably means that McCoy, who missed all of the 2013 season with a torn left Achilles, will miss this season as well. The Seahawks, who have yet to announce a roster move, reportedly have filled McCoy’s spot with another former USC Trojan: WR Ronald Johnson, 25, a sixth-round pick of the San Francisco 49ers in 2011. He spent time with the Philadelphia Eagles in 2011 and 2012 . . .Head coach Pete Carroll also confirmed Thursday that DL Jesse Williams “has a serious knee situation.” The Seahawks have not elaborated.