Part of a three-way trade with Detroit and Tampa Bay, the Mariners Thursday acquired 27-year-old outfielder Austin Jackson from the Tigers and sent Nick Franklin to the Rays. 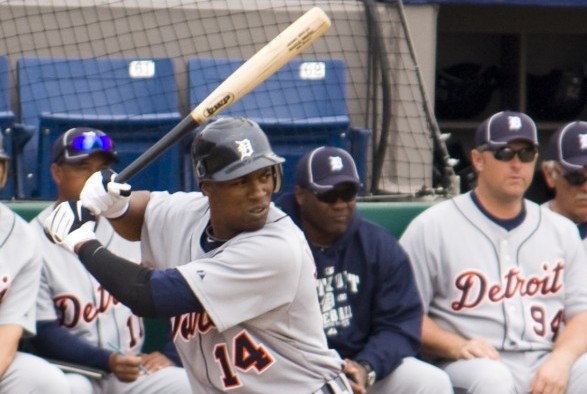 The Mariners nudged right up against the 1 p.m. trading deadline Thursday before pulling off an unanticipated deal that has the hallmarks of a winner. The Mariners essentially turned infielder Nick Franklin, going nowhere in the Seattle organization, into Austin Jackson, 27, a right-handed-hitting outfielder who slashed .270/.330/.397 in 99 games with the Detroit Tigers.

Nor did the Mariners come away with Price’s Tampa Bay teammate Ben Zobrist, a man of all positions who was traded to Pittsburgh.

While this isn’t the magnitude of upgrade the Mariners sought as the trade deadline approached, it’s a definite improvement for Seattle’s anemic offense, defeated with just 85 pitches Wednesday by Corey Kluber of Cleveland.

Jackson is a career .277 hitter who has played above-average defense in center in five seasons with the Tigers. He doesn’t have much power — 46 career home runs, including four this season — but his current stats, if inserted into the Seattle lineup, would make him the team’s third-best hitter behind Robinson Cano and Kyle Seager. The fact that he bats right-handed is a major plus: Mariners’ righthanders sport a dismal .222 average this season.

Jackson, who avoided arbitration last winter by agreeing to a one-year, $6 million deal with Detroit, is eligible for arbitration this winter but won’t reach free agency until after 2015.

He hit leadoff for the Tigers Thursday and went 2-for-4 with an RBI against the White Sox before the Tigers pulled him off the field as the trade went down.

This year, Jackson is leading the league in sacrifice flies (8). He has produced four three-hit games and had a long hitting streak of nine games.

His acquisition won’t enable the Mariners to overtake the Oakland Athletics, who acquired Tacoma’s Jon Lester Thursday, but it could help  — a little — in the Wild Card race. The Mariners still have too many donuts in their lineup.

Jones is likely to be sent to AAA Tacoma, along with Stefen Romero, to make room for Jackson and OF Chris Denorfia, a .242 hitter acquired earlier Thursday from San Diego for  two minor leaguers, OF Abraham Almonte and RHP Stephen Kohlscheen.

Franklin was over-matched by major league pitching. Although he hit 12 home runs in 2013, he batted .225 in 102 games. This year, he played in 17 games and never could get his average above .128. He hit .294 in 75 games for the AAA Tacoma Rainiers. The Mariners are already using a tandem at shortstop with Chris Taylor and Brad Miller.