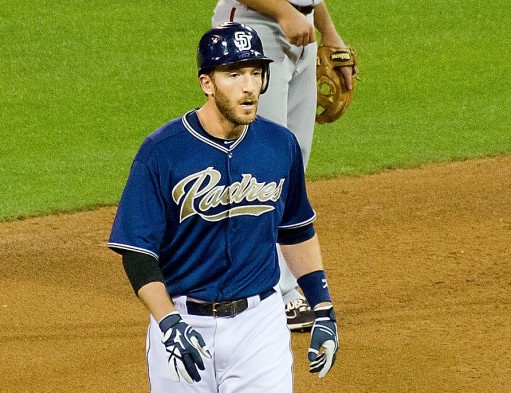 Chris Denorfia can play all three outfield spots and will platoon in right field for the Mariners for now. / Wiki Commons

And the Mariners say: Thank you, Billy Beane.

The Oakland A’s general manager, who has made a tidy side career of bewildering the Mariners by outsmarting them with half the player payroll, did them a favor: He caused so much American League digestive tension with his win-now deal-making, that he made the Detroit Tigers burp up a quality player to the Mariners for a youngster with a dubious attitude and Seattle future.

Beane is smart enough to be general-managing two teams.

The availability and subsequent acquisition by Seattle of top-shelf CF Austin Jackson came as a surprise to most of baseball, including the Mariners, who were perhaps even more surprised that Jackson could be had for Nick Franklin, who in two trials with the Mariners proved he was too cocky for his own good at a position where Seattle had a relative bounty.

But the Tigers, eyes bulging after Beane Thursday morning traded with Boston to add star LHP Jon Lester to a pitching staff that was already running across the landscape with the fervor of Mongol hordes, felt a big urge to armor up for a potential post-season confrontation with the A’s.

They coveted Tampa Bay All-Star David Price, enough that the little-brother Mariners were brought in as the third dance partner. After a few “who, us?” blinks, the Mariners said, “Um, well, would you mind giving up your 27-year-old, right-handed leadoff hitter with a .277 career average who plays good defense, has been in 35 post-season games and has a year and a half left on his contract?”

Thursday morning the Tigers (58-46), with the biggest division lead in MLB, said yes.

The technical baseball term for the response is “whoop-de-damn-do!”

Jackson “really wasn’t on our radar four weeks ago or even last week,” Jeff Kingston, the Mariners assistant general manager, said in a call from Cleveland on AM 1090 The Fan. “It really came together in the last day. He was was a key part of World Series teams, and typically teams like that aren’t eager to move (starters). Rarely do you see a contender move a core player off the roster.

“We’d been talking to Tampa for weeks, and they held a lot of cards (in the MLB trade mart). When Detroit got involved, we were sort of a conduit for the Tigers. There was only one scenario for us — David Price.”

The Rays liked Franklin, who was borderline untouchable in his fast rise up the Seattle farm system, then became touchable after hitting .214 in 118 games over two Mariners seasons. Brad Miller and Chris Taylor leapfrogged over him, so he became surplus goods.

From Detroit, the Rays acquired LHP Drew Smyly and well-regarded minor league infielder Willy Adames. That was enough to send Price to the Tigers, who now have the past three AL Cy Young Award winners, along with Justin Verlander and Matt Scherzer.

Take that, Billy B.

Whatever duels the big boys have going, the Mariners are in a spitwad fight at the kids’ table with half the AL for the fifth and final playoff spot. The goal has been regarded dubiously in some quarters because losing the one-game play-in means sound and fury signifying almost nothing.

But however hollow the prize, and however lucky the Mariners were to catch a wave from the splash made by Beane, the fact is that they have solved via trade for three positions without touching their current roster or top prospects.

Kendrys Morales, acquired for injured relief pitcher Stephen Pryor, is the DH and Jackson is the the centerfielder and leadoff hitter. The third acquisition, Chris Denorfia, whom the Padres dealt Thursday morning in a separate deal for Seattle minor leaguers Abraham Almonte and Stephen Kohlscheen, can play any outfield position and will platoon mostly in right.

Jackson and Denorfia, 34, who hits .301 vs. lefties, will likely end the need for Endy Chavez and Stefen Romero, and have reasonable prospects to help provide that extra one run a game that for the Mariners has been unicorn-elusive.

The damage-free acquisitions were remarkable for an organization that takes a steady pounding (Adam Jones, Jason Varitek) for repeatedly giving away Manhattan for $24 in beads.

“Nick Franklin has drawn a lot of attention within the industry,” Kingston said. “Sometimes you have to give up good young players for help now. We want to win now,  and we also wanted to look into the future two, three, four years and hold on to your (quality) pieces, your core guys.

“Plus, it gives our guys a shot in the arm.”

Whether it helped in Thursday night’s 6-5 win over the Indians isn’t knowable. But the Mariners won the series, they won the trade deadline day merely by not getting pantsed, and they can claim with some legitimacy that they’re as good as anyone at the kids’ table.

To paraphrase from “Casablanca” they might say, “Thanks, Billy Beane, for doing the thinking for both of us.”