Marshawn made a quiet entrance and exit at the Seahawks practice Friday, his first since settling his eight-day holdout with a big of a win-win outcome. 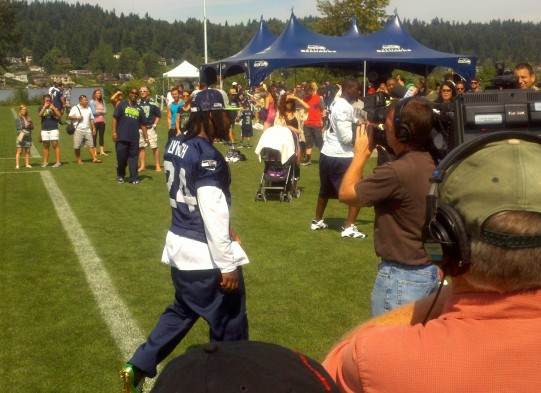 RB Marshawn Lynch ended his eight-day holdout Friday and reported to Seahawks’ headquarters in Renton. Fifteen minutes after practice started, he slipped out a side door and took the field to avoid a media horde awaiting his return.

He watched a short, walk-through practice and did not participate. He jogged back toward the locker room, signed a few autographs for kids, and called it an undramatic day.Lynch had his 2014 contract, which had a $5 million base, sweetened $1.5 million by converting participation and incentive bonuses to base pay, according to a Seahawks source.

So the Seahawks can claim that they gave him no “new” money in the standoff, and Lynch can claim he got something for his trouble. The status of the nearly $500,000 in fines he incurred while holding out remained unclear.

Lynch wanted much more base pay in 2014, knowing that there’s an increasing chance that next year, his age (then 29) and his salary hit against the cap ($9 million) may force the Seahawks to cut him, almost no matter his productivity.

But since his only real leverage was to retire, quitting on $10 million, Lynch accepted the terms the Seahawks offered prior to a mini-camp in May.

“We are looking for him getting out there and getting some reps,” Smith said. “I can’t wait to see it.

“Marshawn doesn’t do a lot of running in the pre-season, so that’s the way it’s going to be. He comes back, nothing is going to change. Absolutely nothing.”

As much as the Seahawks talked up the improvements in the backups, Robert Turbin and Christine Michael, there is no substitute for Lynch’s savvy.

“Marshawn is such a disciplined runner,” Smith said. “He understands what to do — knows where the reads are, and makes things happen.”

Dowtin originally signed as an undrafted free agent with the New York Jets after the 2012 draft. He has also played for the Philadelphia Eagles, Buffalo Bills and New York Giants. He has played in 11 career games with 10 tackles (eight solo).

Johnson was drafted by the San Francisco 49ers in the sixth-round (182nd overall) of the 2011 draft. He has also spent time on the Eagles practice squad.