Seattle’s Hisashi Iwakuma doesn’t have a huge national profile, but he is among history’s greatest pitchers when it comes to not walking batters. 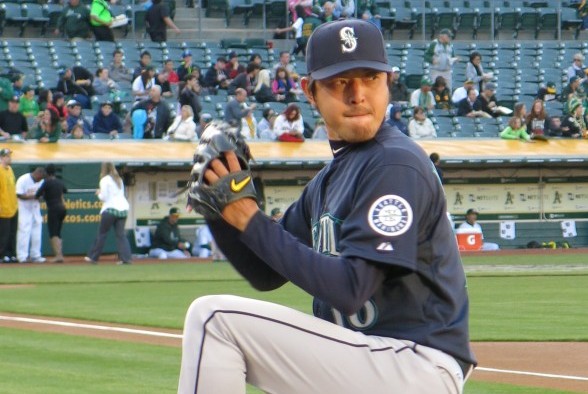 Given the numbers he posts and records he sets, it’s easy to obsess over “The King,” Felix Hernandez, on a run of 14 consecutive starts with at least seven innings pitched and two or fewer runs allowed. No major league pitcher in more than 100 years has produced such a streak — not Walter Johnson, Bob Feller, Sandy Koufax, Tom Seaver, Greg Maddux, Clayton Kershaw, or anyone else in or out of Cooperstown.

While Hernandez tops all pitchers in WAR (5.4 to Kershaw’s 5.3) and is prominent on leaderboards in strikeouts (2nd), innings (2nd), WHIP (3rd), ERA (4th) and hits per nine innings (4th), there are two sub-categories in which he pales next to his teammate, Hisashi Iwakuma: walks per nine innings and strikeouts to walks.

Start with the fact that Iwakuma, who starts Sunday in the final of three games at Baltimore, has walked only nine batters unintentionally in 17 starts. That’s the fewest by a Seattle starter through 17 starts in franchise history (Felix Hernandez has 31 walks through his first 23 starts).

If the season ended today, Iwakuma would have the third-lowest walks per nine innings number – 0.69 — since 1914, as the following shows:

Among Mariners pitchers, the closest to Iwakuma is (never would have guessed this) Blake Beavan, who free-passed 1.42 batters per nine in 2012 over 152.1 innings. Hernandez has walked 1.69 per nine innings this season, part of his case as a Cy Young candidate. And just for comparison;s sake: When Randy Johnson won the Cy Young Award in 1995 while pitching for Seattle, his number was 2.7; when Hernandez won the Cy in 2010, his was 2.5.

That’s half of Iwakuma’s intriguing statistical splurge. His 10.44 strikeouts to walk ratio is as impressive as his 0.69 walks per nine, maybe more so. He leads the majors with that number ahead of National League Cy Young favorite Clayton Kershaw of the Los Angeles Dodgers, who’s at 10.00.

If that 10.44 strikeouts-to-walk ratio holds, Iwakuma will be the second pitcher since 2000 with a number above 10.00 (Kershaw could become the third). Cliff Lee, who spent part of 2010 with the Mariners, had a 10.28 that year, split between Seattle and Texas. Among strikeouts-to-walks leaders since 2000, the only other pitcher to approach 10.00 was Pedro Martinez in 2000 when he posted an 8.88.

Iwakuma, Kershaw and Lee are among nine pitchers since 1945 with a single-season strikeouts-to-walks ratio above 8.00 with a minimum of 117 innings pitched (Iwakuma’s total):

And, finally, in the first inning of Iwakuma’s last start, July 29 at Cleveland, he did something he has done only twice this season (also May 3 at Houston) and nine times in his three-year career: issue a four-pitch unintentional walk (to Michael Brantley). Despite that lapse, Iwakuma is a master at avoiding such self-inflicted gouges. He issued two in 2012, five in 2013 and now two this season. He almost has as many intentional walks (8) in his career as unintentional ones.

Randy Johnson (1989-98) owns the Mariners career record for most four-pitch, unintentional walks with 387, hardly a surprise given the 1,838.1 innings he worked while wearing Seattle togs. Johnson also holds the single-season record, 41 in 1991, when he was more thrower than pitcher.

But the single-game record belongs to Chris Bosio, who had six such walks June 21, 1995 at Chicago among nine overall in five innings in a 5-4 loss.

Six in one game for Bosio (also five for Mark Langston Aug. 29, 1988 against the Yankees), and Iwakuma has a mere nine in his career.