Former Seahawks left tackle Walter Jones entered the Pro Football Hall of Fame Saturday night, the third player developed by the franchise to pass through the portals of Canton. 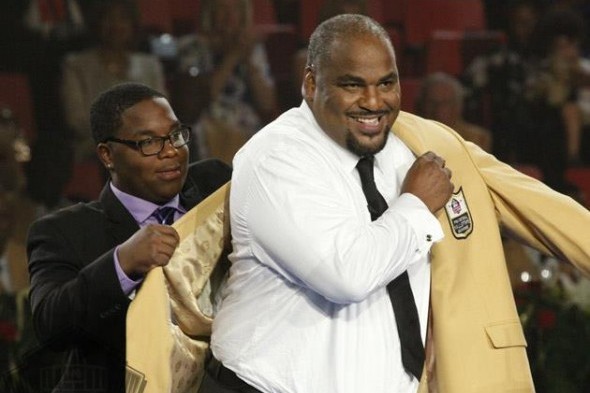 Unlike most of the 2014 Pro Football Hall of Fame inductees, who orated well beyond their allotted 10 minutes, Walter Jones delivered his induction speech Saturday night in Canton, OH., with the same dramatic impact that marked his play as the greatest left tackle of his generation: Effective and to the point.

“I am so honored to wear this gold jacket,” Jones began. “I wear it with pride and I promise to represent it well. I am honored to join Steve Largent and Cortez Kennedy as the third player to represent the Seahawks and the 12th Man in the Hall of Fame.”

Former running back Shaun Alexander sat in the crowd, a huge grin on his face as he watched the cloak come off a bust, unveiling a likeness of his former teammate. Ex-quarterback Matt Hasselbeck was a few rows away, also smiling broadly. Steve Hutchinson, the left guard who in collaboration with Jones made Alexander the 2005 NFL MVP, clapped wildly. The three ex-teammates were part of the best era, overseen by Mike Holmgren, in Seahawks history, until the present one eclipsed it.

“I want to thank Mike Holmgren for bringing success to the Northwest,” said Jones. “I want to thank all of my teammates for contributing so much to my success. Without them, I wouldn’t be here today.”

As did the other inductees  — LB Derrick Brooks, P Ray Guy, DE Claude Humphrey, WR Andre Reed, DE Michael Strahan and CB Aeneas Williams — Jones took the Canton crowd through his football odyssey, starting with his humble beginnings in Aliceville, AL., where he grew up the seventh of eight children.

“We didn’t have much, but mom always made sure we had everything we needed,” said Jones, who called his mother, Earline Jones, who watched his speech with tears in her eyes, “the true Hall of Famer.”

Jones also described his first football moment. A high school coach in Aliceville asked him if he had ever played football. Jones had not. The coach then ran Jones through a series of drills and told him, “I think you are a million dollars walking around broke.”

Smart coach, and so it began. Jones became an All-America at Florida State and was the sixth overall choice in the 1997 draft. The Seahawks made him their left tackle on day one and he played 180 games, all as a starter, before injuries ended his career.

“I’d like to thank all the running backs I blocked for,” said Jones, mentioning Alexander, Chris Warren, Lamar Smith and Ricky Watters. “I’d like to thank the quarterbacks, Matt Hasselbeck, Trent Dilfer and Warren Moon.”

Jones, presented by his 14-year-old son, Walterius, saluted all of the offensive linemen he played with, the three head coaches he played under (Dennis Erickson and Jim Mora in addition to Holmgren), acknowledged various Seahawks’ personnel from owner Paul Allen to the equipment guy, and made special mention of two with Seahawks ties, Holmgren and former safety Kenny Easley (1982-88).

“I believe both are worthy of a place in these hallowed halls,” said Jones, who concluded his remarks by singling out Largent and Kennedy, both in attendance, and the 12th Man.

“What a wonderful group of fans,” Jones said, pointing to several face-painted Twelves who journeyed to Canton for the ceremony. “I truly loved playing for you all. You complete the best organization in the NFL. Football has been a blessing. It changed my life and the lives of those around me. I thank the Seahawks so much, and I love Seattle.”

The most eye-popping statistic of Jones’ career didn’t go without mention Saturday: He made a Seahawks record nine Pro Bowls during his career and allowed only nine sacks, one reason why the team retired his No. 71 jersey immediately upon his retirement.

In addition to being the first Seahawks’ offensive lineman voted to play in the Pro Bowl, Jones was named first-team All-Pro by The Associated Press a franchise-record four times. He played a significant role in springing Alexander loose for more than 100 NFL touchdowns, and for helping Hasselbeck earn three Pro Bowl invitations.

After making 180 starts, Jones failed to get on the field following the 2009 season due to an injured left knee, and was unable to rehabilitate to the point that he could play again. The Seahawks officially announced his retirement April 29, 2010.

In order to take Jones sixth overall in 1997, the Seahawks made a deal with Tampa Bay, giving up a first-round pick (No.12, RB Warrick Dunn) and third‐round pick (No. 66, CB Ronde Barber). A smarter swap they have never made.