A soft non-conference schedule may be the saving grace for coach Chris Petersen as he starts his first fall camp at Washington clueless about a starting QB. 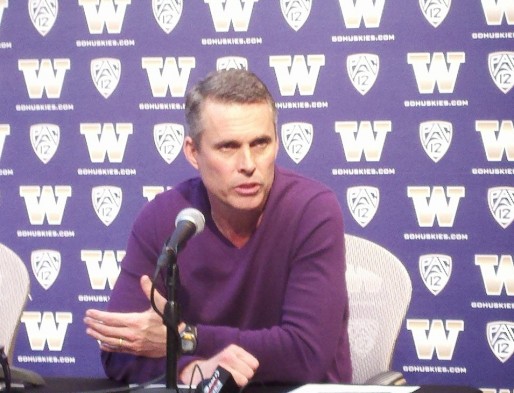 In the previous football coaching change at Washington, all Steve Sarkisian had to do in 2009 was not spit up on himself to be better than Tyrone Willingham’s 0-12 finish to a desultory four post-scandal years.

Sarkisian’s successor, Chris Petersen, does not have the luxury of changing the tire while the car is parked. At 9-4 coming off a bowl win, the Huskies were moving, and Petersen has no choice but to complete the swap while driving the freeway.

And he has no idea who will be driving the car, because the incumbent quarterback, sophomore Cyler Miles, was suspended for stupid behavior, and two other candidates, Jeff Lindquist and Troy Williams, did not separate from each other in spring ball.

So when the Huskies’ fall camp begins Monday, Petersen won’t have Jake Locker or Keith Price or anyone who can take charge any better than the reporters who sat before him Sunday.

Asked by one how far behind Miles was after missing spring ball, Petersen smiled.

“How well do you know our offense?” he retorted. Came the answer: “Barely.”

Petersen, who worked major wonders in eight years at Boise State (92-12), couldn’t have picked a lower threshold for his comparative.

Then again, he couldn’t have picked a better non-conference schedule from which to make the conversion.

Petersen will have none of that, of course, because a heavy-lidded loss to any in the quartet will evoke the ghost of Tyrone — not a coveted comparison for the Pac-12 Conference’s only first-year coach. But there is no getting around the fact that he will have four relatively casual games to test all QBs in a variety of circumstances before the first conference test against Stanford.

Petersen appeared calm in the face of the unknown, saying he didn’t even know who would run with the No. 1 unit Monday, when Petersen divvies his team into freshmen and returnees for the first four days.

“That’s how important I think it is — or don’t think it is,” he said. “All these guys are going to get reps. We’ll divide the quarterbacks up two and two – I believe Jeff and Troy will go in the morning (with the veterans) and (freshman K.J. Carta-Samuels) and Cyler will go in the afternoon.

“That’s the hard one right there: How do you get your quarterbacks all the reps that they need when you’re trying to look at all these guys? That’s going to be tricky all the way through fall camp.”

Beyond the quarterbacks, the conversion is going on at all positions and won’t be completed during the season. Petersen runs a tighter program than Sarkisian, from personal discipline to academic obligations. He also wants to break up position or unit cliques that are typical with most teams.

“He wants everybody unified,” said Shaq Thompson, the junior linebacker from Sacramento and the defense’s top player. He’s among the few who has to walk between the worlds of defense and offense, because he’s booked for some carries at running back.

Thompson said Petersen makes sure that in meetings and non-football gatherings, players group apart from positions or sides.

“We usually don’t talk to offensive linemen,” Thompson said of his defensive compatriots. “Coach makes sure we do.”

Turnover in football coaching staffs happens in one day, but takes a long time to work well.

“Very seldom do you get to that leading phase, where you have that team — a mature team, and they get it and understand it. You’re just guiding them in the right direction a little bit. I’ve been there very few times, and when you are there, it’s something special.”

Before he gets to the leading phase, he has to find his team a leader. With a cotton-soft early schedule, he gets an extra month to complete the search.

Sophomore DE Marcus Farria from Peoria, AZ., who played in six games last season, was fired from the team last week for a violation of team standards, Petersen said . . . Petersen added a defensive lineman, Vita Vea, a 6-5, 330-pounder from Milpitas, CA. “We’re excited about him. We’ve been recruiting him a long time.” . . . Petersen reiterated that freshman DT Jaimie Bryant of Tumwater, a member of Petersen’s first UW recruiting class, took a medical retirement because of a back injury doctors discovered with an MRI. He enrolled early and took part in spring ball. His back “wasn’t going to hold up,” Petersen said. “He didn’t really have any issues in high school, but it started flaring up at the end of spring ball.” . . . Another member of the class, DB Aaron Chapman from San Jose and Bellarmine Prep of Tacoma, has a knee problem that may cost him the season . . . Petersen said he’s at least two weeks away from having a depth chart: “I think we want to give everyone a legitimate chance to compete and really earn and fight for their positions.”