The finish of the Seafair Cup had a little extra-time drama as judges, after video review that lasted nearly a half-hour, ruled that Graham Trucking won without a lane violation. 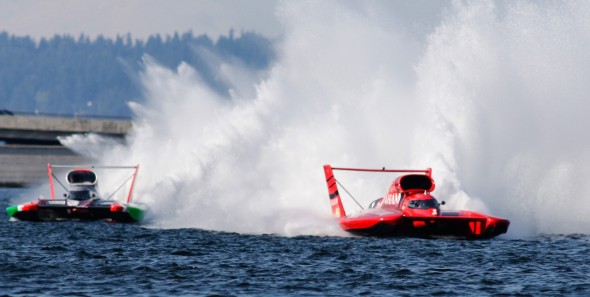 Graham Trucking, driven by J. Michael Kelly, swings out in front of the Obrerto boat driven by Jimmy Shane, in the decisive maneuver in the championship heat at the Seafair Cup on Lake Washington Sunday./ Gary Breedlove, Sportspress Northwest

Hometown driver J. Michael Kelly in the U-1 Graham Trucking won the Seafair Cup unlimited hydroplane race Sunday afternoon on Lake Washington, but it took race judges nearly a half hour of video review to make the determination.

Starting the championship heat, it appeared three boats, including Graham Trucking, crossed the starting line early, which mandates a one-lap penalty. But after the review, no start penalty was invoked.

KIRO-TV commentator Chip Hanauer said in his view, three boats jumped the start, which should have given the U-19 boat, Les Schwab Tires/Team RedDOT, driven by Jon Zimmerman, the win.

The judges apparently spent more time reviewing a maneuver in which Kelly moved lanes  to force wide the U-6 Oberto driven by Jimmy Shane, the favorite. Judges determined that Kelly had the necessary seven-boat-length lead to switch lanes. The Oberto washed down in the Graham roostertail and had its carnard wing broken, finishing third.

“I had the lead, I had overlap,” Kelly told KIRO-TV. “I bumped out to lane four and five. I’m allowed to go anywhere I want, and if he made ground up on me I was out in lane four. So I didn’t go any wider than that.”

In the first heat of the day, the U-96 Spirit of Qatar boat driven by Kip Brown, washed down in a roostertail, flipped and broke apart. As rescue crews descended, Brown extricated himself from the upside-down boat through the emergency hatch under the seat. He was treated for a sore neck.