The losses of Breno Giacomini and Michael Bowie leave a big hole at right tackle, where a rookie, Justin Britt, and three veteran newcomers will try to hang in against the Broncos. 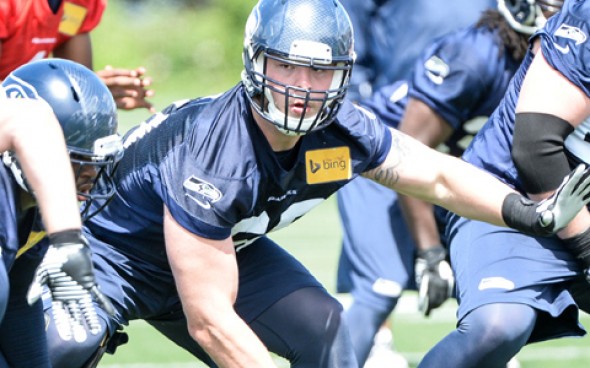 Justin Britt will make his pro debut at right tackle Thursday in Denver as the Seahawks open exhibition season. / Seahawks.com

RENTON — Thursday will be a big day in the life of Justin Britt, the Seahawks’ second-round draft pick from Missouri. His mother, father and little brother are flying to Denver.

“I want them to be there when I first step onto an NFL field,” he said Monday after practice.

Thursday will be a big day for the Seahawks too — somebody will be appointed to play right tackle, maybe Britt, maybe not, whether they are ready, or not.

That’s where the first significant scratch has appeared in the Seahawks’ shiny new championship car. No reason to panic — unless one considers that the Seahawks have hired within the past six days NFL free-agent veterans Eric Winston, Cody Branson and Wade Smith to help buff out the scratch.

Problems began in free agency, when starter Breno Giacomini left for the New York Jets. The Seahawks thought they had an adequate replacement in rookie Michael Bowie, who started eight games when Giacomini was hurt and, as a seventh-round draft choice, appeared to be another great Seahawks value found in the remainders bin.

But Bowie showed up overweight during organized team activities in May, then was hurt last week after the first day of training camp. Turned out to be more than the shoulder “tweak” coach Pete Carroll described. Bowie has damage requiring surgery that will cost him the entire 2014 season.

So the Seahawks Saturday put Bowie on the waived/injured list. Typically, a player so designated is too damaged for another team to select on a waiver claim. His original team then has the option to put him on its injured reserve list so he can rejoin after rehab.

The Saints, Patriots, Cowboys and Browns all put claims in on Bowie over the weekend, according to ProFootballTalk.com. The Browns, with the worst 2013 record, had priority and claimed him Sunday.

“It’s unfortunate that we don’t get to keep Michael,” Carroll said after practice Monday. Asked if they thought about holding open a roster spot for Bowie for a few weeks, he said, “That’s the decision that we made (to waive him). You know, he came in 20 pounds overweight too.”

Well then. Consider that a shot across the bow for any chubby Seahawks holdovers.

So the Seahawks hired Eric Winston, 30, Tuesday, Corey Brandon, 26, Saturday and Wade Smith, 33, Monday. All are 300-pounders who’ve been around the NFL, but weren’t currently employed. Which tells something about their quality.

At least they’re more experienced than the 6-6, 325-pound Britt, whom the Seahawks valued highly but NFL.com scouting site put him pre-draft as a sixth- or seventh-round pick. The Seahawks certainly are proud of their reputation as finders of value where others do not. But it’s been plain since the start of camp that Britt, who sat out part of Saturday’s scrimmage with a sore shoulder, isn’t ready for NFL pass-blocking.

With the first exhibition game Thursday, against a Broncos team that is most eager to stop being the national sports punchline for all that is overrated, it is likely that the newbies won’t be ready to execute the Seahawks schemes.

So to put it in a word rarely heard around the VMAC: Help!

“This is a very competitive situation with Britt and with Winston in there,” Carroll said, chin high. “I think Alvin Bailey will be mixed into this thing too eventually.”

That would be the current starter at left tackle, where the second-year vet is holding down the spot for Russell Okung, the Pro Bowler who put on pads for the first time Monday after rehabbing a toe that was surgically repaired in the off-season.

But presuming Bailey is busy Thursday protecting QB Russell Wilson’s blind side, a platoon of strangers to each other as well as the team will handle the right side. Even Carroll sounded a little bit apprehensive.

“We’re hoping that Wade Smith and Cory Brandon can bring us something,” Carroll said.  “We have a lot of young guys at the spot. These guys – Wade in particular – bring a lot of experience and tremendous flexibility. He has started at five spots, so that kind of flexibility might fit with us.

They’re real good guys, and smart guys, so that helps us as we try to mold this thing together. We’re going to take our time figuring it out.”

The Broncos will be happy to hear the Seashawks are in no rush, because they certainly will be, over right tackle.

Among the various minor injuries was a more serious-sounding development regarding a foot injury to impressive rookie receiver Kevin Norwood. “It’s going to take some time here,” Carroll said. “We’re going to continue to evaluate him. It’s a situation we’ve got to wait out a little bit.” . . . Two Grammy award-winning acts, singer/rapper Pharrell and Seattle’s own Soundgarden, will perform a free concert outside CenturyLink Field Sept. 4 before the regular season opener against the Green Bay Packers. The music begins at 4:30 p.m. and will be broadcast on the NFL Network.