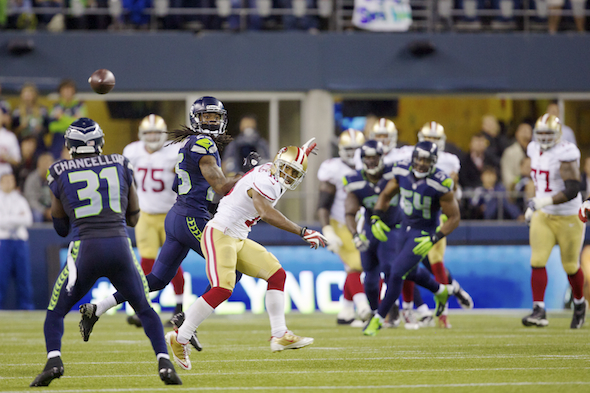 Two of the most important Seahawks who went in the shop for off-season repairs said Tuesday they are close to a full-speed return to the demolition derby. LT Russell Okung (foot) and SS Kam Chancellor (hip) have been held out of full action in training camp and won’t play Thursday in Denver in the exhibition opener, and perhaps not at all in the preseason.

Chancellor, chief mayhem dispenser in the Legion of Boom, quietly underwent surgery in April to repair labrum damage that didn’t keep him out of action — he started all 16 games and had 80 tackles and three interceptions — but has nagged since his days at Virginia Tech.

“A pretty long time, about five or six years, dating back to college,” he said.  “It was something I dealt with for a while. They cleaned up some old stuff that was going on with my hip. It’s better now.

“I just feel like I’m on a perfect schedule to get right back on the field.”

Backup Jeron Johnson has been taking most of the snaps at strong safety. Chancellor sounded impressed.

Chancellor was asked about Denver’s T.J. Ward, a physical safety from Oregon signed in free agency after four years in Cleveland. It was seen by some as a sign of the impact of Seattle’s defense on NFL thinking.

I’m sure it’s very impactful — teams are probably trying to imitate us, but I don’t think it’s possible,” he said. “You can go get guys our size, our speed or whatever but you can’t teach the heart side of it. You can’t teach the want-to. Guys out here want to.”

Okung had surgery to correct a toe problem that cost him eight games last season and reduced some of his effectiveness.

“I’m feeling pretty good,” he said. “It’s great to be back out here after a really long offseason, at least to me. Now that I’m on my path to recovery, I’m just very grateful to be out here.

“We sat down with the coaches and the training staff and we just thought it was my best move going forward. We didn’t really want to struggle with it anymore. I’m really glad I got to get it done.”

Okung wasn’t willing to concede his play was impeded.

“Football’s a tough game,” he said. “There’s not a guy out there that’s not playing hurt or doesn’t feel that well, so you just kind of accept it and roll with the punches.”

As a sideline observer, he was asked about the play over at right tackle, where rookie Justin Britt and newcomer vet Eric Winston are trying to fill a sudden void, as well as the play of his backup,  Alvin Bailey, likely to start Thursday.

“Alvin’s doing really well. He really took a great step moving forward into his second year and has a lot of promise.”

Of his left-side running mate, guard James Carpenter, Okung said, “James has been phenomenal this whole off-season. He’s really got down to the grind of it.

“You can see he’s a lot healthier and really in shape.I’m really looking forward to what the season’s going to look like for him.”