A 7-3 win Wednesday over the Braves flashed some of the possibilities that the post-trade-deadline lineup has in coming up with an extra run or so a game. 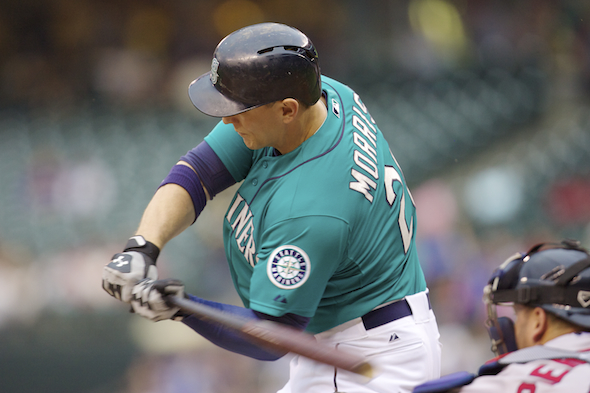 In his daily interview with radio broadcaster Rick Rizzs, manager Lloyd McClendon said Wednesday morning he felt a “rumbling” that the dormant Mariners offense was coming around. With pitching and defense already flourishing, he said, “we could be scary.”

Turns out the rumble was not indigestion. It was Nostradamus.

On cue, Dustin Ackley led off the third with a solo homer, Logan Morrison hit a three-run shot later in the inning, and the lineup produced 12 hits for a 7-3 win over Atlanta and a four-game sweep of the interleague season series.

Yes, the Braves went 0-8 on a road trip for the first time since 1949 when they were the Boston Braves. Yes, the Mariners began the day last in the American League in runs scored. So yes, the Mariners are not yet scary.

They are, in fact, relevant. Scary? If you squint hard into the distance . . .well, it’s a little murky yet. Cynicism is a thick fog. But a rumbling? Mac is on to something.

The new acquisitions to which Seager referred are starting to make a difference. Not in a dramatic way, but a walk here, a sac fly there, maybe an extra base hit. Perhaps saving one out every couple of games with defense.

The margins are small in the great middle of the American League. And the Mariners gave up nothing from the 25-man roster to get CF Austin Jackson, DH Kendrys Morales and OF Chris Denorfia. The three are better than the players they replaced; so is rookie SS Chris Taylor, perhaps the most unexpected contributor.

By now, we all know the seasonal story: The Mariners are 53-17 when they score three or more runs. So the ask of the new guys is not immense: Play to the back of your baseball cards.

“It’s a nice mix,” McClendon said. “We have a nice veteran presence. We’re getting ready to take off.”

Wednesday, they even managed to score first, with Ackley’s shot, then came back to cover for the maximum allowable one bad inning from a starter. Chris Young gave up three runs in the third, and Seattle came back with four in the bottom half, three from Morrison’s big fly. It was the first time since July 1 (13-2 at Houston) that they scored more than six runs in a game.

It’s helpful to keep in mind that the lineup has had a significant remake since Opening Day: Five new starters.

At first base, Morrison replaced Justin Smoak, at shortstop Taylor replaced Brad Miller, in center Austin Jackson replaced Abraham Almonte and James Jones, and Endy Chavez is holding down right field in the three weeks Michael Saunders has been out with a strained oblique muscle. DH Kendrys Morales so far hasn’t been much better than the injured Corey Hart, but there’s nothing to suggest he won’t be.

All these guys don’t have to hit at once; one just has to hit, once. Pitching is so good that they have become baseball camels, just needing a drink every few days. They have allowed two or few runs a major league-leading 49 times. The Oakland A’s are second with 45.

As it has been all season, the bullpen Wednesday was stellar — five guys pitched four scoreless innings, allowing only three hits.

“Our bullpen is in real good shape,” McClendon said as he knocked on the podium. “It’s nice to have that eight-man bullpen with so many quality arms down there and so many choices. You don’t have to overuse anybody or stretch anybody out.”

With an additional hit or two a game, the Mariners are capable of sustaining relevance.

“It is,” said Young, among the few with playoff experience, “extremely fun.”

Young reached 10 wins in a season for the first time since 2006 . . . Since July 1, Ackley is hitting .346 . . . Taylor has hit safely in each of his eight starts  (.393) . . . Saunders will begin a rehab turn AAA Tacoma Thursday after missing three weeks with a strained oblique muscle on his left side. He’ll DH, then get into the field.  . . . News wasn’t as good for INF Willie Bloomquist who has been out since July 23 with a bruised knee. “He’s not healing at the rate they thought he’d heal,” McClendon said. More will be known Thursday. Surgery or extended rest are among the options.