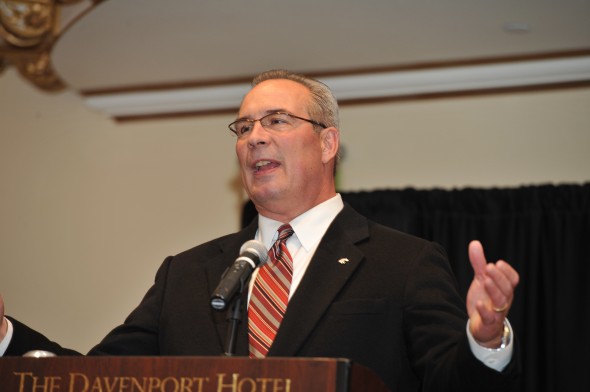 Bill Moos has been running Washington State athletics for 4½ years and likes the track the Cougars are on. / WSU Athletics

Bill Moos has made any number of major announcements during his 4½ years as athletic director at Washington State, but Moos “forgot” to announce at least one major news item.

Moos, who came out of retirement to sign a seven-year contract as athletic director in 2010, waited until Thursday to reveal that school president Elson Floyd extended his contract to 2020 during the past football season.

Asked why he waited so long to make the news public, Moos said, “I keep those things under the radar because I don’t like to splash my own headlines.”

Moos has made plenty since returning to his alma mater, where he once starred in football and later served as assistant athletic director. Moos discussed his contract extension, the football team’s prospects for 2014, the latest facility improvements and much more during a lengthy interview.

SPNW: How do you feel about what you’ve accomplished?

Moos: First, I am always thankful to President Floyd for giving me this opportunity to finish my career where I started it when I was 18 years old as a student-athlete myself.

I have a tremendous staff that’s been revamped and is really doing a great job. And then, of course, our over 450 student-athletes who believe, like the coaches, that we can compete and win championships at Washington State. Not overnight. I said from the beginning that there will no quick fixes. We’ve got to tear some things down and rebuild.

SPNW: After Mike Leach’s first year as football coach, you predicted his third season would be a breakthrough. Now that it’s here, do you still feel that way?

Moos: We’re in a position to be able to compete with everybody and anybody in our conference. And that’s saying a lot, because this is a doggone tough conference in football, which was illustrated by having nine out of the 12 teams in bowl games last season.

Certainly the Pac-12 North is a challenge but our players understand Mike Leach’s system now. They are bought in. The ones who want to be here are here. The ones who questioned it are gone.

We have back-to-back recruiting years that are quite impressive. Those players are in the program now and contributing. We’ve already got, as I last heard, 10 to 12 commitments for the 2015 class of some very, very impressive high school players. Everything’s coming together. Now we’re really building the program.

SPNW: Counting the Aug. 28 season opener in Seattle against Rutgers, the Cougars have seven home games. That should help the win total, right?

Moos: I think our schedule favors us. We’ve got a tremendous home schedule. We’ve got great energy in our fan base, which is evidenced by our season ticket sales, which could be in record proportions by the time we are finished.

SPNW: Paul Finn, the WSU athletics tickets manager, said last spring that he believed the Cougars could sell out all six football games in Pullman this season. Do you agree?

Moos: I would be confident to say that we have a chance. A lot of that depends on when they will be played. We’ve got the night-game issue and those things. Also, the success of the team.

SPNW: How are ticket sales going for the Seattle game?

Moos: They’re moving nicely, but we have found in our Seattle games since I’ve been here – and the Seahawks warned us of this – the rate of sale on those tickets for Seattle will pick up 14 days out.

SPNW: Will this be the final “home” game in Seattle?

Moos: We’re going to assess that. One needs to realize that we just put $130 million into Martin Stadium (counting the new, adjacent Football Operations Building). We’ve got to weigh the value of it. I think (an annual Seattle home game) served its purpose early on because we did not have the big TV deal, and we had to explore for revenue streams to get our program jump-started.

SPNW: You’re looking at a $10 million deficit for the past fiscal year in WSU athletics, but that’s primarily due to all the new construction and facility upgrades. How grateful are you that the Cougar Athletic Fund has record membership and donations for the third straight year?

Moos: We’ve appealed to our fan base and they have responded. We have the highest numbers in the Cougar Athletic Fund in the history of the school. Most members, most dollars paid.

We’ve slowly changed the culture, that this fine university can be a destination (for coaches) and not a stepping stone in our two revenue sports (football and men’s basketball). We’ve got conference, district and national coaches of the year who want to be Cougars. We’ve got everything in place right now, and I would say after 4½ years, we’re in stride with the blueprint right about where I figured we’d be.

SPNW: Now that it’s finished, what do you think of WSU’s first Football Operations Building?

Moos: It really turned out super. It even exceeded my expectations.

SPNW: That building, looming over the west end zone, should add some juice to the atmosphere at Martin Stadium on game days, right?

Moos: You put that with the south-side premium seating, which is spectacular, then brand-new (artificial) turf with all the branding that is consistent with our brand, then we’re doing some cosmetic improvements that will be done by kickoff. It’s a big-time, major college football venue, no question.

SPNW: Those other improvements include red brick outlining the sideline areas at field level. How much will that cost?

Moos: We were able to absorb it with the Operations Building budget . . . I wanted to put a little frosting on the cake with the brick.

SPNW: Anything new planned for outfitting the Cougars on the football field this year? Like, say, all-white helmets or special uniforms?

Moos: That’ll be a surprise. I always like the element of surprise.

SPNW: Are you trying to line up big-name football opponents for future games?

Moos: We always have a handful that we’re discussing, but who knows what the leagues are going to look like in five years? So everybody is kind of careful there, and we’re in the first year of the football playoffs, the four-team (national) playoffs, strength of schedule; everyone’s kind of in a holding pattern to see how this first year and the first couple years work out. Taking that into consideration, I feel very good we’ve got five years (of games) secured.

SPNW: You’ve spearheaded major changes in the emphasis on proper nutrition for WSU athletes, and the Cougars were quick to jump on board when the NCAA expanded meal options for athletes not on full scholarships. All WSU athletes now receive two free meals a day, but full-scholarship athletes will continue to be the only ones receiving free evening meals (deducted from their living stipend). Might that change in the future?

Moos: We’re going to gauge it. It’s all brand new across the country. We’re geared in for this year how we’re going to do it. This is for the entire academic year. We’ll access it just like we do everything at the end of the fiscal year.

SPNW: You’ll be 69 when your contract expires. Can you handle six more years on the job?