A sluggish match finally turned the Sounders way in the 69th minute on a goal by Marco Pappa, ending a streak of more than 250 scoreless minutes. 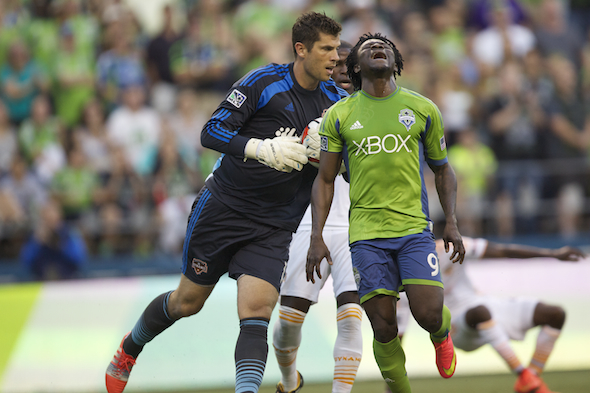 In a game as ugly as the CenturyLink pitch, the Sounders finally ran out of excuses, regrouping in the final 20 minutes Sunday to beat Houston 2-0 and reclaim the MLS points lead it lost in the previous 24 hours.

The Sounders (13-6-2) lost three of the previous four games, all by shutouts, to watch their 10-point lead in the West disappear. Another listless result seemed imminent until the 69th minute when Marco Pappa, finding himself unmarked above the box, blasted a shot that deflected off Dynamo defender David Horst as well as the fingertips of GK Tally Hall and into the back of the net.

A semi-bored gathering of 50,276 — the third time this season the Clink was in full use for soccer — came to attention as the Sounders moved to 11-0-3 in front of crowds of 40,000 and to 41 points, two up on Real Salt Lake, which won Saturday night to leapfrog temporarily over Seattle.

It was also MLS win No. 200 in the career of Schmid, already the winningest coach in league history. He had been waiting a month for it, and there was little beyond its fact to make it memorable.

The Clink field provided a suitably grim platform. The stadium hosted an Amazon.com corporate party in the days before the game, and additional rubberized pellets were raked into the turf. But the field turned into a two-toned swirl of ugly green and ugly gray, although the center circle was all ugly gray. It was also made more slippery.

“I think because of the rubber that came off, there was slipping out there, definitely more than usual.,” Schmid said. “The grounds crew did everything they could to make it as good as possible.”

Had the Sounders lost to the lowly Dynamo (6-12-4, including 1-9-1 in their last 11 on the road) the crappy pitch could have added to the list of excuses the Sounders had for their laggard play: injuries, and the interruptions of the World Cup, The Tottenham friendly, the MLS All-Star break, the U.S. Open Cup, etc.

Or they could just admit they let up after the big lead.

But Pappa’s shot, free of build-up or organization, nevertheless went in and changed the narrative.  Six minutes later, most doubt was removed after a penalty kick from Gonzalo Pineda, whose shot was captured momentarily by Hall, only to lose control and bounce into the goal. The foul was on Ricardo Clark, who grabbed Obafemi Martins by the arm in the area and spun him down.

In the 86th minute, Martins drew his second yellow card for a tackle from behind of Brad Davis, signaling his ejection and loss for the next MLS game Saturday at Real Salt Lake.

The match was the first of three in six days for Seattle, which has five in the next 14. They were helped by the return of defender Chad Marshall, who missed the previous two games with back and neck soreness after a traffic accident.

But he had no hand in the defensive play of the game, which belonged to GK Stefan Frei, who in her 26th minute guessed correctly on a PK by Brad Davis, diving left to catch the shot that Davis began with a stutter step.

The defense remained shorthanded because DeAndre Yedlin was watching from a Clink suite. The MLS All-Star and World Cupper was given the game off after returning Saturday from a 10,000-mile round trip to London, where Tottenham is bidding for his services. ESPN’s Alexi Lalas reported that the Sounders are negotiating a transfer that allows Yedlin to finish the MLS season before reporting to the EPL.

The Sounders meet Chicago in a U.S. Open Cup semifinal at 7:30 p.m. Wednesday at Starfire Sports Stadium in Tukwila, then Saturday at Real Salt Lake.