Mariners’ pen is finally mightier than all

In contention for an AL wild card spot, the Mariners not only feature the best bullpen in franchise history, but one of the best in the majors over the past 25 years. 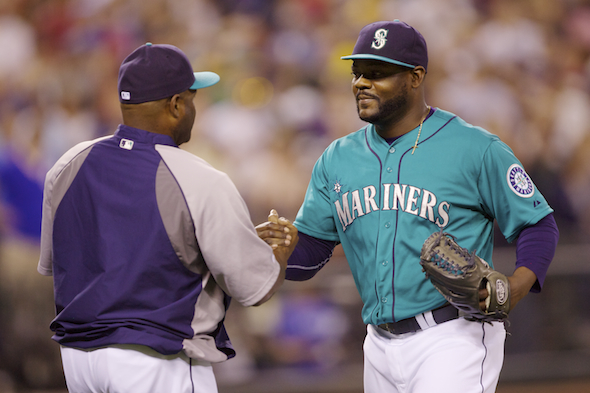 Closer Fernando Rodney,  with manager Lloyd McClendon, has led a revitalized Seattle bullpen which has become the best in the AL. / Drew Sellers, Sportspress Northwest

The Mariners spent a major portion of the past weekend celebrating the accomplishments of Lou Piniella, making him the eighth inductee into the team’s Hall of Fame. Among Piniella’s notable deeds during his 10-year reign (1993-02): 840 victories, seven winning seasons, four postseason appearances, and numerous not-to-be forgotten ejections. It’s a record unmatched by any other manager in franchise history.

Piniella’s portfolio would sport an even brighter sheen if he hadn’t been burdened by six of the 10 worst bullpens, by ERA, in club annals, starting with the 1999 edition – Jose Mesa, Jose Paniagua, Ken Cloude, Frankie Rodriguez, Eric Weaver  — that blew 18 saves and finished with a 5.94 ERA, the principal reason Seattle finished 79-83 and missed the postseason.

The 1998 bullpen was almost as gallingly sloppy, blowing 21 saves and ending with a 5.44 ERA in a season that saw the Mariners finish 11½ games behind Texas in the AL West.

In the conversation leading up to Piniella’s induction Saturday night at Safeco Field, many wondered if Piniella isn’t also a viable candidate for Cooperstown. With 1,835 career wins (14th all-time), a World Series title (1990) and a better winning percentage (.517) than three Hall of Fame managers, including Connie Mack and Casey Stengel, Piniella certainly is. But he would have an even better case if not for this:

During his 10 seasons in Seattle, Piniella’s relievers combined for 188 blown saves, more than a full season’s worth.

Piniella would have loved — well, maybe not loved because he harbored a deep suspicion of pitchers — to manage the current Seattle pen. Despite allowing six walk-off losses, it’s the most effective group of relievers in franchise history, based on ERA and OPS, as the following shows:

The current numbers would look even better if closer Fernando Rodney hadn’t blown a save Saturday night and followed Sunday by giving up a ninth-inning run.

In addition to allowing nearly a run less per game than Piniella’s 2001 116-win phenomenon, the current pen ranks first in the American League in ERA at 2.36 and first in fewest runs allowed (100), fewest home runs allowed (20) and opponent batting average, .213 to Oakland’s .219.

Not only is this year’s pen the best in club annals, it ranks among the best in the majors over the past 25 years. The following are the top ones over that period based on OPS:

4 RBIS BATTING #1: Austin Jackson produced four RBIs Sunday in Seattle’s 4-2 victory over the Chicago White Sox. Jackson became the second leadoff hitter in franchise history to drive in all of the Mariners’ runs in a game in which they scored at least four times, joining Tony Bernazard, who had five from the leadoff slot against the Angels in a 10-5 loss Aug. 13, 1983.

Six Seattle leadoff hitters have driven in more than four runs in a game, including three who accomplished the feat twice: Mickey Brantley, Ichiro and Brad Miller.

LATE LIGHTNING: Catcher Mike Zunino, who received a day off Sunday, crashed a three-run homer Saturday night to wipe out an early White Sox lead and provide Hisashi Iwakuma with his 10th win (4-1). It was Zunino’s team-leading 18th home run, all of which have come with him batting sixth, seventh, eighth or ninth in the order. That’s the most home runs hit from that part of the lineup by any major leaguer this season.

It’s also the highest total of home runs hit from that area of the lineup by a Seattle player since Jay Buhner hit 25 in 2000 while batting sixth.

And, since you’re wondering, Bob (Scrap Iron) Stinson still holds the single-season record for home runs by a No. 9 hitter, eight in 1978.