Yedlin transferred, will stay with Sounders in ’14

Defender DeAndre Yedlin has been transferred to Tottenham Hostspur of the English Premier League, but will spend the rest of the 2014 season in Seattle. 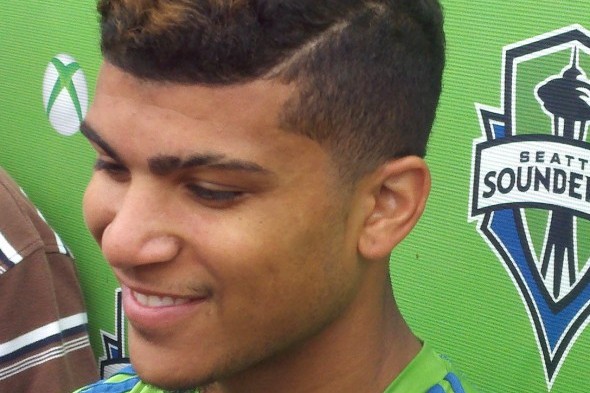 DeAndre Yedlin has been transferred to Tottenham Hotspur, but will help the Sounders try to win a championship before departing. / Art Thiel, Sportspress Northwest

The Sounders Wednesday completed a $4 million transfer of 21-year-old defender and two-time MLS All-Star DeAndre Yedlin to Tottenham Hotspur of the English Premier League. Under terms of the transfer, the Seattle native and O’Dea High School product will remain with the Sounders for the remainder of the 2014 season, at least.

“We are extremely proud of what DeAndre has accomplished in his young professional career,” said Sounders general manager Adrian Hanauer in a statement. “His success is a reflection of his individual ability as well as soccer development in Washington State and the continued commitment to progress the sport in this country.

“DeAndre is and always will be a special member of the Sounders FC family, and we are excited to have him in Seattle for the remainder of the season.”

“We are very excited for DeAndre and the possibilities that exist for him in his future with Tottenham Hotspur. It’s an exciting time in his life,” added Sounders head coach Sigi Schmid. “We are also very pleased that we will be able retain DeAndre’s services for the rest of the season in our quest for the MLS Cup.”

Yedlin, the first Homegrown Player signed by the Sounders (Jan. 11, 2013), roared into national and international prominence earlier this summer when, against immense odds, he was selected for the USA World Cup team. Yedlin made the most of his opportunities with impressive performances in group stage matches against Portugal and Germany and a knockout round match against Belgium.

Yedlin came on in the 72nd minute against Portugal and drew raves for his speed on the right flank before setting up Sounders teammate Clint Dempsey with a go-ahead goal in what became a 2-2 draw.

While the $4 million transfer fee is the largest spent on a Homegrown Player, it’s a pittance for a speed-oriented club such as Tottenham to take a flier on a player of Yedlin’s potential.

Yedlin has made 45 appearances for Seattle in MLS regular-season play, scoring one goal with two assists. He also contributed one goal and one assist in two games in the 2013 MLS Cup playoffs and scored against Tigres in last year’s CONCACAF Champions League quarterfinals. Across all competitions, Yedlin has started 50 of 52 appearances, logging 4,444 minutes with three goals and three assists.

“I first want to thank everyone involved in my development,” Yedlin said. “From my family to youth coaches to the Sounders, I am lucky to have such a strong support system. I’m excited to have the opportunity to play with Spurs in the English Premier League, and I look forward to helping the Sounders win a championship this season.”