Halliday on no one’s QB radar but the Cougars’

Washington State quarterback Connor Halliday set aflame the record book for passing, but was shunned by pundits picking 2014 stars. But a few guys in crimson have his back. 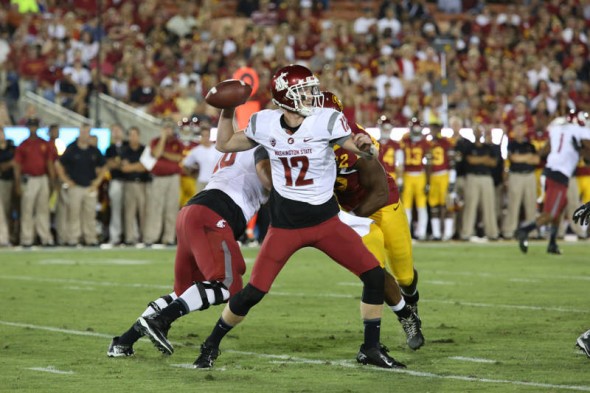 Connor Halliday was overlooked in the preseason by everyone but his teammates. / Wiki Commons

Halliday’s reward? Pac-12 coaches left him off the all-conference team. Not even honorable mention. And this fall, ESPN.com left Halliday off its list of the top 25 players in the Pac-12.

What’s a guy got to do to earn a little respect? As it turns out, all Halliday has to do is keep his ears open in WSU’s swanky new locker room.

“Honestly, I think he has the ability to win the Heisman,” defensive end-tackle Xavier Cooper said.

“He’s one of the best quarterbacks in the entire nation,” coach Mike Leach said.

“There’s not another quarterback in the nation I’d rather have than Connor Halliday,” linebacker Darryl Monroe said.

“He has it all,” Monroe said. “He’s a prototypical NFL quarterback. He’s smart. He’s mature. He’s got the swagger. He has the attitude. He has the calm to lead the young guys in the offense.

“I believe in Connor Halliday.”

Halliday led the nation with 22 interceptions last year. However, he also led in pass attempts, and he was picked off just five times in the last five games. When the ball is thrown nearly 55 times a game, as Halliday did last year in his first season as a full-time college starter, a few are bound to wind up in enemy hands.

Leach, the first to admit he is highly demanding of his quarterbacks, has frequently praised Halliday for his hard work, improved decision-making and leadership. Players echo Leach’s opinion about their quarterback.

“Since I’ve been here,” Cooper said, “we haven’t had a guy at quarterback to step up and be a leader like Connor.”

Halliday, a fifth-year senior out of Ferris High School in Spokane, sounds wise beyond his years when he discusses the importance of older Cougars providing guidance for younger teammates. Halliday wants to make certain the youngsters gear up for one game and one game only: The next one.

“We play so many young guys, and the Pac-12 season is such a grind,” Halliday said. “If you start worrying about what’s ahead of you, the young kids lose focus.”

“Think about it. Their whole life, they’ve either been the star of the team or the next guy. They’ve been recruited heavily. With recruiting being what it is nowadays, they’re told they’re amazing. Which is awesome and great, but how are you going to be able to handle (adversity)?”

Halliday, an outgoing young man who can be refreshingly candid with reporters, admitted he struggled two years ago in adjusting to Leach’s offense and quirky ways while sharing playing time with Jeff Tuel (now with the NFL’s Buffalo Bills). Dysfunction in the locker room was rampant as players took sides regarding the new coaching staff.

“It was horrible,” Halliday said.

The quarterback said team morale and leadership is much improved nowadays. That helps set the stage, Halliday hopes, for WSU’s first winning season and major bowl game in more than a decade.

“I remember on signing day (for his letter of intent) my senior year in high school, I said I chose WSU, among other reasons, to be the quarterback that starts the change.

“I’m in a position to fulfill that dream. That’ll be kind of emotional, to get us to a big bowl game this year, something like that.”

Halliday’s importance to the Cougars, who have no other quarterback with college game experience, cannot be overstated. In each of Leach’s two seasons on the Palouse, the Cougars have led the nation in pass attempts and finished dead last in rushing attempts (and yards). Halliday’s 714 pass attempts last year rank second in major college history behind the 719 fired by Texas Tech’s B.J. Symons in 2003.

Tech’s coach that year? Some guy named Leach. It’s also worth noting that the top two single-season passing marks in major college history belong to a pair of Texas Tech players: Symons with 5,833 yards in 2003, and Graham Harrell (now a quasi-assistant coach at WSU) with 5,705 yards in 2007. Leach coached both.

Halliday’s 4,597 yards last year rank 23rd all-time in big-boys college football. No one in WSU history had thrown for more than 4,000 yards. Of course, Halliday threw 211 more passes than any Cougar before him.

When Halliday tied a major college bowl record with six touchdown passes at the New Mexico Bowl, he tied Ryan Leaf’s school record of 34 TD passes in a season. Halliday set a major college record with 89 pass attempts (89!) at Oregon, and his 557 passing yards that night was tops in the Football Bowl Subdivision last year.

Halliday’s parents can’t be too surprised over Connor’s success. After all, father Duane was a quarterback at Boise State, and Duane groomed his son to be a quarterback from an early age.

“As a child,” Halliday recalled with a smile, “I would pick things up and throw them around the house. Whatever I could find. My mom finally said, ‘Duane, we need to get a football in that kid’s hands.’

“So I started doing that, and they got me a little Dallas Cowboys uniform and a little plastic helmet, because that was my dad’s favorite team. I’d wear that around the house and throw the football at dad until dad got too annoyed to do it anymore.”

Barring disaster, Halliday – who was not heavily recruited out of high school, despite putting up big numbers as a rail-thin senior at Ferris — will wind up holding virtually every prominent passing record in WSU history. Who knows? Maybe he can top Leaf’s third-place finish in the 1997 Heisman voting. That’s the best Heisman showing to date by a Cougar.

“It would be amazing to be in that conversation,” Halliday said, “and it would be an amazing reward for everybody, because that means we’re having a year that will be forever remembered in Pullman.”