Thiel: Seahawks fix many things in a walkover

An upgraded O-line performance helped the Seahawks gain 243 yards on the ground, including 4 TDs by quarterbacks, in routing the Chargers. 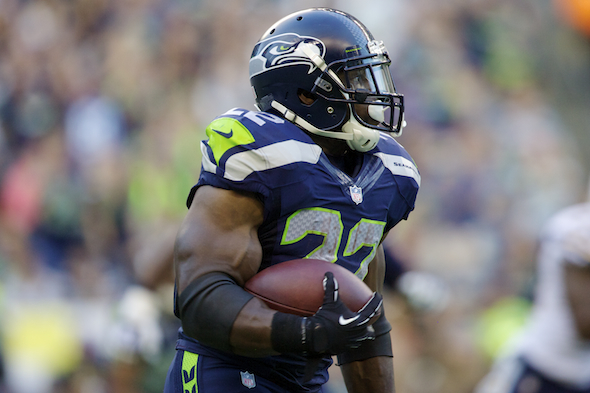 Robert Turbin had 81 yards rushing, including a long of 47 yards, Friday night in the 41-14 win over the Chargers at the Clink. / Drew Sellers, Sportspress Northwest

To borrow a term from the PR staff: Whatever concerns the Seahawks generated among their followers after the preseason-opening loss last week in Denver were bogus. To the great relief of the Twelves, who were reunited with their heroes Friday night at the Clink, for the first time since the NFC Championship, in the usual and accustomed way — a celebration of domination.

But the manner of the 41-14 disassembly of the San Diego Chargers was a little unusual and unaccustomed: Four rushing touchdowns by three quarterbacks, part of 243 yards on the ground that helped produce scores on every possession except for a halftime kneel-down.

“The line was clicking,” said QB Russell Wilson. “The communication was great. We’ve been training our whole offense to be explosive.”

“We had a very good week of practice,” coach Pete Carroll said of the offensive improvements. “It felt like that week of work really translated to the night. We came off the ball well and all the running backs were able to get some running room, hit it nice and show some good stuff.”

Injury absences and a rookie right tackle caused the Seahawks numerous problems in the 21-16 loss to Broncos. But little carryover was evident, the Seahawks doing so much damage on the ground that the Chargers overcompensated and left passing lanes open to Wilson’s predation. He hit on 11 of 13 throws for 121 yards, and was sacked only once.

No one benefited more than RB Robert Turbin, who is supposed to be facing tough competition from Christine Michael for the backup job to Marshawn Lynch. But after Michael fumbled for a second time in two preseason games — a high crime in the Book of Pete — Turbin put some distance in the debate with 81 yards in 12 carries.

Most notable was the game’s longest play, a 47-yard run from deep in Seattle territory in which he broke past the line of scrimmage, cut right hard and blew past all defenders save one, whom Turbin greeted with a stiffarm that was Beastmodian, before he was pushed out of bounds.

“I loved the finish,” Carroll said. “I’ve been trying to get Turbo to straight-arm somebody since he got here. He had a dominant straight-arm. He finally used one in big fashion, and I was really fired up for him.”

After getting a glimpse of Turbin’s canteloupe-sized biceps, the Seahawks might have to be ordered to register Turbin’s stiff-arm with the federal government.

Wilson, who is Turbin’s road roommate, was thrilled.

Robert works so hard every day,” he said. “He catches and protects so well, and he’s really in a groove running. It’s exciting to watch him. He so quick getting in an out of his cuts. He puts his foot down and accelerates past everyone.

“He thinks he’s faster than me. We’ll have to take the pads off (and race to find out).”

Lynch had a courtesy start, but left after the first series with no carries. Perhaps he was tired from the exhaustive investigation done by the Bellevue Police Dept. over the bogus allegations he assaulted someone.

Turbin picked up the slack, as did Michael with 45 yards in eight carries. But he fumbled his first carry, and even though he recovered it, Carroll was irked.

“Tacklers got underneath him,” he said. “He was low on both cases, but they got their helmets to the football and he needs to protect it more. He needs to fix that.”

Turbin was not the only dazzler. Wilson scored twice in the second quarter, one a six-yarder when the entire Chargers defense went to either side and left the middle open, and a one-yarder when he play-faked a handoff and won the race to the corner pylon. But the QB play of the day belonged to Terrelle Pryor.

Trying to help the Seahawks keep a third quarterback on the roster behind Wilson and Tarvaris Jackson, Pryor in the fourth quarter took off from the pocket down the Chargers sideline for a 44-yard score that left slackjawed many in the crowd of 67,615 over the 6-foot-4 Pryor’s ground-eating strides.

“We’ve seen him do that before,” Carroll said. “So they gave him a chance, and shoot, he made it look awful easy.”

Once again, Wilson engaged in playground banter about who’s the fastest.

“I told Terrelle as he got over the sideline, ‘You know, you may be faster than me just by a little bit, but I’m still quicker,’ ” Wilson said. “He hit the edge pretty quick. He was moving.”

On defense, the first unit smothered QB Philip Rivers sufficiently that he was hustled out of the game after two series and four passes. DE Cliff Avril came off the line to shake up Rivers a couple of times, and rookie LB Brock Coyle, the undrafted free agent from Montana, continued to shine with a team high eight tackles. The Seahawks outgained the Chargers in the first half 255-42.

Second-unit CB Therold Simon appeared to have an end zone interception in the third quarter that he turned into a 103-yard touchdown return. But he was flagged for illegal contact on the receiver, or at least the latest interpretation of the freshly changed rule that has defenders grumbling and at least one referee bewildered.

A bogus call. The Seahawks, however, were sincere as a tax audit.