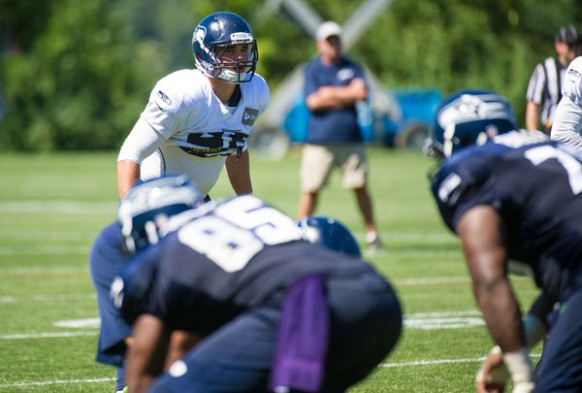 Brock Coyle, a free agent from the University of Montana, is arching eyebrows in the preseason. / Seahawks.com

RENTON — The preseason leader in the Seahawks’ annual Undrafted Free Agent-to-Starter Derby appears to be LB Brock Coyle, who was seen in Seahawks practice Monday running far behind his man, WR Percy Harvin.

Get used to it, kid. Lots of defenders will see the 11 on Harvin’s back shrink to the size of quotemarks.

Getting disappeared by Harvin was, for Coyle, one of a number of surprising moments. But none were greater in magnitude than Coyle’s own presence as a starter in the first two preseason games after showing up undrafted from University of Montana, not yet known as the Alabama of the Rockies.

He’s there because the veteran starter at middle linebacker, Bobby Wagner, is nursing a sore hamstring. But as injuries go, hamstring strains have an unpredictable shelf life. Wagner won’t play Friday when the Seahawks host the Chicago Bears. The hope is he will be ready for the Aug. 28 fake-game finale in Oakland.

But if he’s not ready by the Sept. 4 commencement of genuine mayhem, would you, Pete Carroll, um, would you really . . .

“I’m not worried about (starting Coyle) one bit,” Carroll said Monday. “If he had to play, he could play.

“It’s not even a big deal to us right now. He’s done it, so he’s kind of gotten through that.”

If that happened, you know what that means? WR Doug Baldwin would have a challenge to his presidency of the UDFA Club. For now, however, Baldwin hails via tweet his potential rival:

Shout out to one of my favorite rookies @BrockCoyle56. Hell of a game, sir. #UDFAALLDAY

Coyle is not worried about usurping Baldwin’s status as the team icon of indignance.

He’s got enough to do to keep from coughing in Harvin’s dust.

“This whole experience coming to training camp has been humbling and eye-opening,” he said after practice. “But it’s been great. It’s been everything I’ve dreamed of during workouts: To be among the best.

“Playing against Percy Harvin, it doesn’t get any better.”

Nevertheless, from his first start in Denver, Coyle demonstrated no reverence or awe for his station. In the second quarter, one of his five tackles hit RB C.J. Anderson so hard that he left the game with a concussion.

He had eight tackles Friday against San Diego, offering a steady validation of his post-scouting combine measurables of a 4.6-second 40-yard dash and a 37-inch vertical leap.

That would be noteworthy for a 6-foot-1, 243-pound kid from Bozeman. But for a national-class skier, that’s standard leg strength.

Until he was 16, Coyle was a formidable ski racer, winning numerous regional events in the Rockies resorts. But he couldn’t resist the siren call of football.

“Anything I do, I want to be competitive,” he said. “I was winning regional races, doing well, but there came a time where I had to figure out what I wanted to put my whole heart into. Football was that. I’ve loved the game since I was a kid.”

Even though there’s no more more solitary a discipline than skiing, there was some carryover to the most team-intense of sports.

“Ski racing is one shot, one opportunity that one day, on the mountain,” he said. “All your training and work goes into one run. It really helps me in football, because of that visualization and preparation for one moment.

“Football has more plays, but it’s all relative. You’re doing the same things regarding visualization.”

“He’s improving on his tackling and his pass drops,” he said. “He got banged around week one. He did a little better this week, had a couple more aggressive tackles. He’s a little high in his tackles last week and he missed the opportunity on some pass drops trying to do too much. So we zeroed him in during the week. He had a nice game.

He’s a good, instinctive pass defender. He was looking around, trying to do too much. Hopefully, he will settle down a do a better job there.”

Coyle won’t lack for the intangibles. He comes from a hyper-athletic family. His father was an All-America lacrosse player at St. Lawrence University in upstate New York. His mother played multiple high school sports and is a runner and skier.

Older brother Chris is a nationally competitive freestyle skier who lives in Salt Lake City, and younger sister Alexa is still in high school, where she is also a nationally ranked skier at the junior level and a premier soccer player.

“She’s the best athlete in the family,” Coyle said, smiling. “Growing up with two brothers helped.”

The family’s athletic confidence has come through already in Coyle’s first weeks in the NFL.

“I had a greater comfort level in the second game than the first — I know I can play in this league,” he said. “First game, I had jitters. I didn’t know what to expect. Now I know: It’s the same game I’ve been playing my whole life.

“Sure, it’s bigger and better players. But I was comfortable with the defense.”

If Wagner doesn’t heal, Coyle’s comfort level will be tested Sept. 4 on national TV in front of the game’s most rabid fan base, staring down Aaron Rodgers and the Green Bay Packers.

At least when Coyle says it’s all downhill from here, he’s speaking from knowledge.

Injured starters LB Malcolm Smith, LT Russell Okung and C Max Unger returned to practice Monday. Carroll said the offensive line’s play against the Chargers, against whom Seattle acquired 243 yards rushing, was “one of the better preseason games I can remember” . . . He praised right guard J.R. Sweezy, calling his highlight blocks “fantastic” and pointed them out to the entire team. LG James Carpenter also came in for praise. Carroll said the guard play was the highlight of the game . . . Carroll said LB Bruce Irvin, recovering from hip surgery, “is making great progress. He’s really encouraged and it feels like he’s ready to go.”