Explosive plays and a more stout line inspires the thought that the Seahawks offense can carry the team. Should the defense want a Sunday off, which seems unlikely. 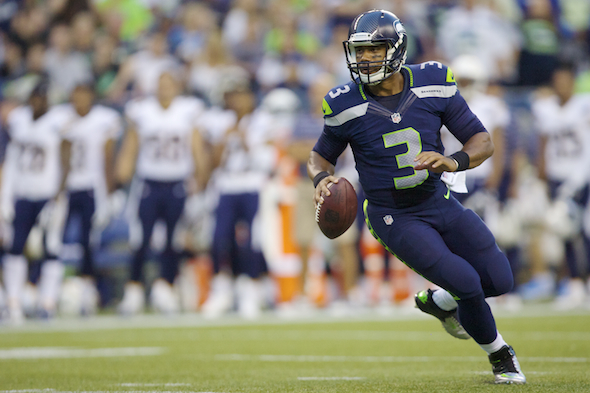 Either the rest of the NFL is falling back, or the Seahawks are running away.

The third-fake-game dress rehearsal suggested, at 34-6, that the Seahawks are ready to skip the set-up acts and go directly to the third act. In particular, the offense’s diversity seemed to baffle the Bears defense, often finding itself way more than a step late.

“I thought our offense tonight was exceptional,” QB Russell Wilson said. “We put it together tonight. Being explosive is what we want to do. We can throw so many exciting players out there. Makes it kinda tough to beat us.”

The explosive plays were entertaining but, in the big picture, were secondary to the evening’s prime accomplishment. The unglamorous, weakest link came out strong — LT Russell Okung, LG James Carpenter, C Max Unger, RG J.R. Sweezy and rookie RT Jason Britt were healthy and together for the first time this preseason. It showed what was possible.

Against a Bears defense purported to be respectable, the line helped deliver seven third downs on seven attempts in the half. They weren’t perfect in pass protection — Britt was beaten for a sack of Wilson, and escaped other sacks as only he can — but the impression was of a group more capable of asserting itself.

The second possession of the evening was a beauty of 89 yards in 11 plays. After RB Marshawn Lynch in the first drive had three carries and 16 yards, including a seven-yard score, he retired for the night and turned over the rush to backups Robert Turbin and Christine Michael.

Turbin had three carries, Michael two and Wilson was 3 for 5 in the air, all completions for at least 16 yards. On third and goal at the Chicago 7, the Bears forgot to keep an eye on Wilson. He strolled out of the pocket into the end zone without a defender in his zip code. The drive even overcame Wilson’s lone sack, a nine-yard loss when DE Willie Young beat Britt.

“I had a learning experience out there,” said Britt. “It’s good it’s happening now. I’m feeling more comfortable each week.”

The progress of Britt and his linemates was crucial in making the offense grow as effective as the defense, which had to carry more than its share last season. Nearly all on offense have responded in the past two games.

“I’m thrilled with what we saw, both last week and this week,” Carroll said. “The first week, I don’t know what that was. Tonight we did just what we wanted. A lot of really fun things happened tonight.”

Among them was a 46-yard kickoff return by Percy Harvin — “it was almost like the Super Bowl, almost,” Wilson said — a 60-yard punt return by Earl Thomas — “everything I touch turns to gold,” he said, grinning — and a 41-yard return by SS Jeremy Lane of an interception that thwarted the Bears’ best shot at a touchdown.

That set up perhaps the most over-the-top moment of the evening. With 15 seconds left in the first half and ahead 28-0, the Seahawks eschewed the taking of a knee, picked up 16 yards on two plays and had Steven Hauschka slam a career-long 59-yard field goal as time expired.

If Jim Harbaugh had been on the other sideline, he may have been moved to inquire, “What’s your deal?”

It’s part of the Seahawks’ ethos: Leave no doubt.

Another part of Carroll’s fun was seeing Harvin’s lightning shock the shape out of the Bears defense. He caught three passes for 61 yards and sent yips throughout the Chicago side every time he lined up.

In fact, the difference in team speed was palpable on nearly every play.

“We got a lot of it,” said Harvin. “That’s the one thing with this team. They scout it. They brought so much talent. We know as long as we come out here and do what we’re supposed to do, we just let Russell sit back there and pick his poison.”

Another matter the Seahawks have established in the past two games is that there doesn’t seem to be much of a Super Bowl hangover.

“It’s a lot of distractions out there,but we’re not letting that get in our way,” Thomas said. “We’re playing beautiful football right now. From the first group to the second group, guys are just coming into their own.

“The way we are in practice, we’re bringing that same person to the game.”

With a line healthier and receivers faster, it’s possible to see an offense that can indulge the defense an off-game or two. That wasn’t imaginable last season, but suddenly is a reasonable goal for an unreasonably good team.