Thiel: In McClendon, Mariners have one right

The Mariners have been in managerial dither since Lou Piniella. In Lloyd McClendon, they seemed to have found a guy who manages up as well as he manages down. 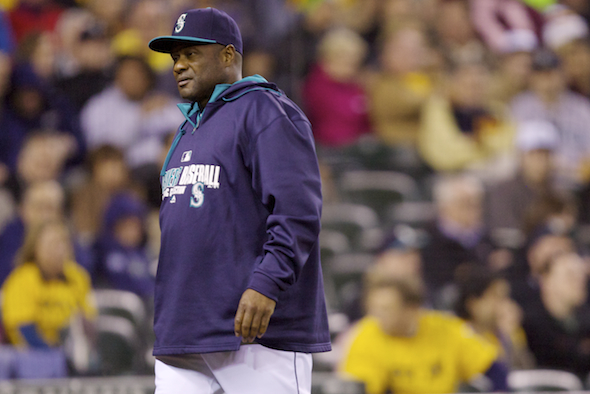 When Mariners bosses announced Nov. 5 that Lloyd McClendon was the new manager, I offered up a shrug that could have been measured in megatons. Here is some of what I wrote:

“Unqualified for the world’s worst occupation  — a single mother with three kids and no income — Lloyd McClendon had to settle for second-worst: He’s the new manager of the Seattle Mariners. I’m sure he knows what he’s doing, which puts him one-up on his new bosses, but either he didn’t have Eric Wedge’s phone number, or Wedge signed a confidentiality agreement to stay mum . . .

“That doesn’t necessarily mean the roster for 2013-14, still subject to much change, will be hopeless, only that McClendon will be helpless to influence the seasonal outcome. If the Mariners manager was granted influence, Wedge would still be here.”

So, um, Lloyd? When you were a major league player, did you ever foul a ball off your foot? Hurts like hell for a minute, but you step back in and take your cuts. That’s how I feel about that column now.

With 33 games left in the regular season, the Mariners at 71-58 have matched their win total from a season ago after three victories in Boston over the weekend — the first time in the franchise’s turgid 38-year history they have swept the Red Sox in Fenway Park.

The Mariners are a game up on the Detroit Tigers for the American League’s last wild-card playoff spot, and return home Monday for three against the worst team in baseball, the Texas Rangers.

“This is it,” McClendon told reporters before Friday’s game. “It really is.”

He was referring to the stretch drive to the playoffs, a time when no starting players get games off and all eyes are upon the out-of-town scoreboard. Personally, I believe such engagement awaits the Labor Day benchmark, because it’s not only tradition, but I believe that premature curiosity will spell the same doom that befell the Nazis in “Raiders of the Lost Ark,” when Indiana Jones knew to tell Marion to keep her eyes closed until everyone melted.

But if fans want to risk it now, well, it has been 13 years since this happened in Seattle, so I can’t expect everyone to keep up on Old Testament protocol.

Even though it is reasonable to say that a manager’s influence on game outcomes is typically overrated, McClendon’s contribution to this situation can’t be diminished.

Keep in mind that he took over after Wedge, trying to leverage a contract extension beyond 2014, did his own meltdown in the final days of a 71-91 season, the Mariners’ eighth loser in the past 10. Wedge lambasted ownership in public and announced he was quitting before the season ended, even though he stayed on the job.

A month after McClendon’s hire, Wedge and other former Mariners baseball executives went on the record in the Seattle Times with a scathing denunciation of the front office and ownership, calling the Mariners “dysfunctional” and full of betrayers and micro-managers.

Five days later, the Mariners stunned all of baseball by outbidding the New York Yankees for the free agent services of All-Star second baseman Robinson Cano. While it was certainly a worthy hire, the 10-year contract for $240 million — $65 million more than the Yankees offered — was seen by many as more evidence Wedge was right to suggest the Mariners might be street-rat crazy.

Into the storm ambled McClendon, who is proving to be the calm at the center. McClendon spent the previous eight seasons in Detroit as the hitting coach for Jim Leyland, one of the game’s most respected managers who retired after last season at 68.

When McClendon was passed over to succeed Leyland, the Mariners made him their eighth manager, counting two interim guys, since Lou Piniella left in 2002. No team in baseball has churned managers faster than the Mariners. A franchise consumed by remorseless dithering had made another hire that seemed inconsequential.

After a mediocre major league playing career of eight seasons as an outfielder/first baseman with three teams and a career .244 batting average, McClendon managed the Pittsburgh Pirates from 2001-05 to a 336-446 record, never winning more than 75 games in a season. But the franchise was run on the cheap; the talent never was there, the primary cause of 20 consecutive losing seasons.

Fired by the Pirates, he was snapped up by Leyland, building a new staff in Detroit. The Tigers over the next eight seasons would play in four American League Championship Series and two World Series.

It’s clear that McClendon has adopted Leyland’s cool steadiness. In contrast to the edgy Wedge, who sizzled and popped amid five-game losing streaks — and finally blew last season when, at 45, he suffered a minor stroke, from which he has recovered — McClendon has a serenity about him that belies the pressure.

When Leyland retired, Detroit Lions coach Jim Schwartz offered an appreciation of Leyland that mirrors how McClendon has guided his mostly young team through the tumult of the off-season, an eight-game losing streak in April, a perpetually maligned front office and the waves of cynicism surrounding the team.

Said Schwartz: “I think the hallmark of (Leyland’s) managerial style would have been the same hallmark if he would have been a ship’s captain. He would have been up at the helm, probably smoking a cigarette. It would have been like 20-foot swells, hurricane coming in and he wouldn’t even bat an eye. Everybody on the crew would have looked up and said, ‘Hey, things are going to be OK.’ That’s why I have so much respect for him.”

In watching and listening to McClendon in his first five months in Seattle, he is honest without being cruel, cool without being dull, and passionate without being overwrought. He is that rare man who knows himself and uses that knowledge to lead, free of bullying or intimidation.

“I think players appreciate your honesty, but it is a two-way street,” McClendon told mynorthwest.com’s Shannon Dreyer. “You have got to be able to give, in order to take. I give my players a lot. When I ask, I think they are willing to give back.

“I liken it a lot to a deposit into a bank. Sometimes you are going to need a withdrawal. I give them a lot so when I do go back and ask, say, ‘I need you to pick it up,’ I can withdraw a little bit.”

The withdrawals have paid off. The Mariners have seen in-season growth from position players such as Dustin Ackley and Kyle Seager, and pitchers Tom Wilhelmsen and Erasmo Ramirez. He’s not without error — his backing of rookie Abraham Almonte as starting centerfielder was a bust — but he has kept everyone from going over Here We Go Again Falls until their abilities caught up with his belief.

As importantly, he has managed up. He seems to have struck a rare tone with GM Jack Zduriencik, new president Kevin Mather and the much-vilified CEO, Howard Lincoln, to leave him alone until he raises his hand. He raised his hand in June, saying he needed more right-handed hitting.

None of the foregoing is offered as assurance that the Mariners in September will be successful. After a half-generation of failure, the scar tissue is too thick and tangled. But as the weekend series in Boston suggested — shortfalls by starting pitchers Felix Hernandez, Hisashi Iwakuma and Chris Young were mitigated by 20 runs from the oft-maligned offense — there is a resourcefulness with this team that is measurable and growing.

Growing up in Gary, IN., McClendon was a legend in Little League ball. In fact, “Legendary Lloyd” was his nickname. His Gary team reached the 1971 Little League World Series, where McClendon hit five homers in five at-bats. His other five at-bats, he was walked intentionally.

If McClendon gets the Mariners to the playoffs, even the single-game, wild-card ordeal, the nickname should be dusted off, varnished and permanently affixed.

Because he beat the doomsday odds in Seattle. Instead of a scapegoat, the Mariners hired a manager.