The Mariners completed a sweep in Boston for the first time, all three coming from behind, including a dramatic 8-6 win Sunday in which neither Iwakuma nor Cano could finish. 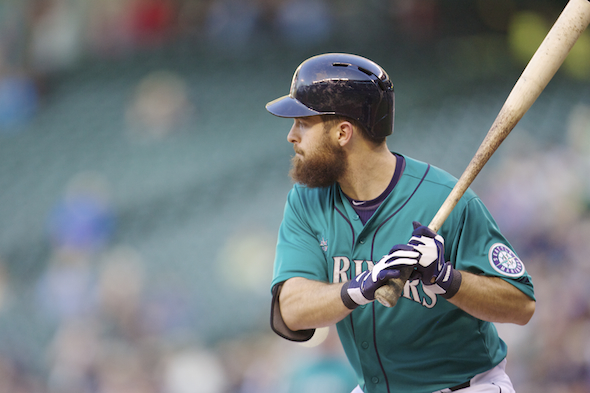 Dustin Ackley has 17 RBIs in his past 17 games, including one in Sunday’s 8-6 win in Boston. / Drew Sellers, Sportspress Northwest file

The net effect of a broom job in which Seattle scored 20 runs:

Winners of 14 of 18, the Mariners improved to a seasonal high-water mark of 71-58, the wins matching the 2013 total. Although Detroit defeated Minnesota Sunday, Seattle remained a game to the good in the joust for the American League’s second wild card spot. The Mariners haven’t been 13 games above .500 since the end of the 2007 season, and ended the nine-game road trip 6-3 without a win from Felix Hernandez.

“Boston showed a lot of grit. Things haven’t gone their way (eight consecutive defeats), but my hat is off to them. They could have folded their tent, but didn’t. It was a tough day in a lot of different ways for us, but we got the win. Now we can celebrate for 15 minutes and get ready for Texas” Monday night at Safeco Field.

Iwakuma began his 22nd start with a 12-6 record and 2.57 ERA, but experienced an absurd first inning relative to past performances. It took him 39 pitches to record three outs, during which he plunked a pair of batters, uncharacteristically walked another, and coughed up a 3-o lead his teammates had bequeathed him.

“Iwakuma just didn’t have it,” said McClendon, without elaboration.

The fact that Iwakuma lasted 2.1 innings while surrendering five earned runs, snapping a streak of 17.2 consecutive scoreless frames, less than 24 hours after starter Chris Young made it through 3.2 IP, placed a heavy onus on Seattle’s bullpen.

But six relievers, starting with winning pitcher Dominic Leone, who worked 2.2 innings, and ending with closer Fernando Rodney, who loaded the bases before striking out Kelly Johnson to nail down his 38th save, held the Red Sox to one earned run.

Boston had multiple opportunities to score more — the Red Sox failed to tally 13 times with runners in scoring position — but the Mariners kept wriggling out of trouble. In the seventh, the Red Sox had runners on the corners with one out after Chris Denorfia lost in the sun a routine fly by Mookie Betts. But reliever Danny Farquhar somehow snagged a laser off Christian Vazquez’s bat and then doubled up Betts at first.

“It hit me in the glove,” said Farquhar, barely able to react to the screamer. “My glove just happened to be open.” A hit there would have tied the score.

The Mariners jumped on Boston starter Allen Webster, scoring three times in the first on singles by Kendrys Morales, Kyle Seager and Logan Morrison. But the out-of-sorts Iwakuma gave up an RBI single single to Yoenis Cespedes and a two-run, bases-loaded single to Will Middlebrooks.

After a nine-pitch second inning, Iwakuma came apart in the third, allowing two more runs before McClendon applied the hook. The outing was Iwakuma’s shortest of the season (four innings vs. Boston June 25) and the five earned runs came within one of matching his career high.

The Mariners got a run back in the fourth on Denorfia’s sacrifice fly that scored Seager, and went ahead in the fifth 6-5 when Ackley busted an RBI triple, scoring Austin Jackson (single). Brad Miller added a sac fly, plating Ackley.

The Mariners had an opportunity for another run in the sixth when Chris Taylor singled and stole second with two outs and Jackson batting. But Taylor blundered by trying to steal third and was thrown out.

In the eighth, the Mariners parlayed a Morales single, a pair of passed balls by Vazquez and a Seager single to left into another run and a 7-5 lead. Seager’s RBI was his 80th.

Johnson doubled into the left-center gap on a first-pitch fastball from Charlie Furbush to score Brock Holt and slice Seattle’s lead to 7-6 in the eighth. But Tom Wilhelmsen came on to get Cespedes to fly to left before striking out Allen Craig to end the inning.

Brad Miller, who replaced Cano, drove a ball off the Green Monster in the ninth, the double scoring Ackley with an insurance run.

Rodney needed 34 pitches to secure his 38th save in 41 chances.

Cano departed in the third inning after he became dizzy. McClendon said afterward that it was “a 24-hour bug” and expected Cano to be available Monday . . . The 2.1 innings by Iwakuma was not only his shortest outing of the season, but the shortest of his MLB career. Iwakuma has a 10.20 ERA in four career starts against the Red Sox . . . Ackley has knocked in 17 runs in his past 17 games . . . By allowing six runs, the Mariners saw an end to their their streak of allowing four or fewer runs at 20 consecutive games. That was the longest streak by any major league team since 2010 (Giants, 23) and the longest by an AL team since 1981 (Athletics, 21) . . . OF Michael Saunders, recalled from his minor league rehab assignment with AAA Tacoma Saturday, won’t play for at least five days. He has a viral infection . . . The Mariners have a 37-26 road record, best in the AL. Seattle has not finished with a winning road record since 2003 (43-38).