Party! Come to F.X. McRory’s in Pioneer Square Thursday to celebrate the publication of “Russell Wilson: Standing Tall” from the staff of Sportspress Northwest. 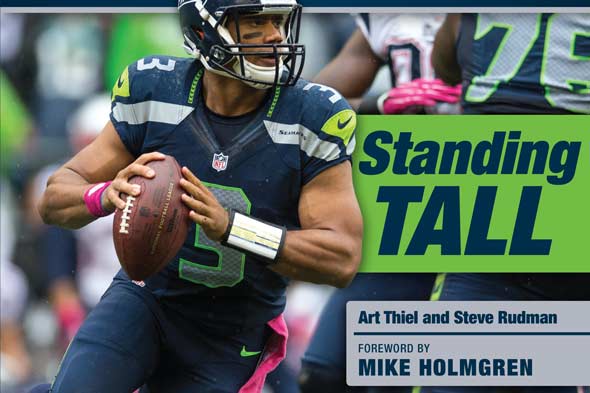 The pro football feats of Russell Wilson, all in one place. / Triumph Books

For guys who have chronicled so much sports despair in Seattle, Steve Rudman and I looked upon the Seahawks’ run to the NFL championship as a weapons-grade astonishment. Major pro sports championships happen around here with the regularity of series sweeps by the Mariners in Boston.

So when Triumph Books of Chicago hit us with an idea, we seized the day to celebrate Seattle’s sudden sports serendipity.

In bookstores this week, including Barnes & Noble and online at Amazon.com, is “Russell Wilson: Standing Tall,” a commemorative look at the remarkable deeds in the Seahawks quarterback’s first two years in the NFL.

Stories and photos from Sportspress Northwest’s content, plus a foreword from former Seahawks coach and quarterback expert Mike Holmgren, were combined to create a dramatic narrative of Wilson’s quick rise to command of the offense, which led to the Seahawks to command the NFL.

Although Steve and I knew his story from day-to-day coverage, as do many Seahawks fans, seeing it all in one place — particularly via the lenses of photographers Drew McKenzie and Drew Sellers as well as the reporting of Adam Lewis — makes the saga even more compelling.

From his prep days in Virginia through two big-time college programs, along with a side tour of minor league baseball, Wilson has been a force of nature wherever he has played, including a highly regimented professional sport that was programmed to marginalize his value because he wasn’t 6-foot-4.

His almost fully formed game as a rookie rocked Seattle and the NFL, and fit well the Seahawks plan created by coach Pete Carroll: Control the game with defense and field position, make few mistakes and give the ball only to those who cherish it.

Isn’t that the script for a QB “game manager?”

Late in his rookie year, Wilson led the Seahawks to 150 points over three games, a rampage unseen in the NFL in 63 years. That was not the deed of a game manager.  That was the early work of an an exceptional talent.

By his second year, the Seahawks were installed as Super Bowl favorites. Then Wilson, teammates and coaches did something nearly unique in Seattle sports history: Fulfill every expectation, from the regular season through the Super Bowl to the White House.

Frankly, this sports market had not seen anything like it.

To continue the celebration, SportspressNW.com invites you, the Twelves, to join us for a launch party, the first of several book-signings in the area:

Mick McHugh, the esteemed proprietor of F.X. McRory’s, wants to double the sports fun that will coincide with the Washington State football opener at the Clink against Rutgers. When the Cougars fans head to the game, TVs in McRory’s premier sports bar will be filled with the Seahawks’ preseason finale in Oakland at 7 p.m.

So please join us for a big football evening, and talk of championships, sports histories and sports futures.

If you can’t make it, feel free to order the the print or e-book via Amazon.com.