It’s not necessary to observe long new UW football coach Chris Petersen to detect echoes of Pete Carroll and Lloyd McCl;endon in how he wants to run his shop. 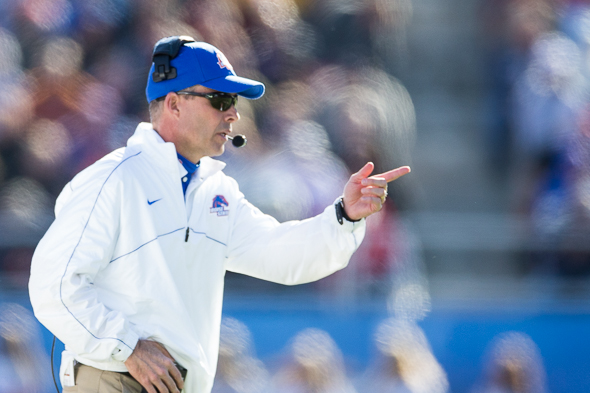 Chris Petersen is highly organized, detail-oriented football coach who seeks to run a program square, plumb, flush and level.  Hospital corners on bedsheets so crisp they leave cuts. It would be intriguing to see, if someone were to pull up Petersen’s tucked shirt from his trousers, whether he would spontaneously combust.

Probably not. He is so prepared, he knows he is unprepared.

“Oh, there’s no question,” he said during his first game-week press chat as University of Washington football coach, answering a question about craziness in season  openers. “And it wouldn’t matter if you’re at a place for a long time. You’re going to have stuff where it’s like:  ‘Are you kidding me? How did that happen?’ You already know that’s coming.”

Crazy has already happened, well before beach cooties infest his team in Honolulu.

A couple of months after his move from a highly successful tenure at Boise State, he learned that his presumptive starting quarterback waded into a campus crowd celebrating the Seahawks’ Super Bowl win wearing a Denver Broncos beanie. Cyler Miles couldn’t have asked for more trouble if he’d worn a suit of bacon into a den of wolves.

So breathtakingly dumb was that provocation, regardless of who hit whom, Petersen suspended Miles for all of spring ball as well as the Huskies’ opener at 7:30 p.m. Saturday at Hawaii. But he didn’t throw him off the team, as he did his fellow Bronco booster that night, Damore’ea Stringfellow.

Petersen dismissed three others in the off-season for unidentified infractions of team rules, including one over the weekend, freshman safety Lavon Washington — one of his first class of recruits to Montlake. He lasted six months and never made it to a game or a classroom.

“Guys gotta do things right around here,” Petersen said in a calm monotone. “It’s been preached from day one, and if they’re not, we’ll take action.”

But before Petersen is presumed to be giving new meaning to the term kickoff, it’s worth knowing he’s not some overwrought, Woody Hayes-style martinet. In fact, it’s nearly the opposite, and different from his UW predecessor, Steve Sarkisian.

Asked to explain the differences between the coaching staffs, Huskies LB Shaq Thompson, a preseason all-conference selection by many media outlets, was forthright.

“No yelling and screaming,” he said. “And they are very consistent every day in what they do.”

If that sounds familiar to Seattle-area football fans, it’s an echo from the Gospel of Pete — Pete Carroll, the Seahawks coach and, for purposes of this discussion, the other Pete.

Both coaches have a conviction that in the tumultuous world of big-time sports, the head man has an obligation to have the same set of rules, attitudes and responses regardless of circumstances or pressures. That may sound obvious, but especially in college, where the players are younger and the alums, boosters, websites, fans at the bar and the university president all know better than the head coach what to do on third-and-seven, steadiness is an elusive imperative.

It was something often missed by Sarkisian, which is ironic, since he worked at USC under Carroll.

But it’s also important to remember that when Sarkisian was hired for the 2009 season, he was 34 and had never been a head coach at any level. It was a large gamble on the part of AD Scott Woodward. For the most part, it paid off. But as in the time Sarkisian was so mad at some dumb penalties that he dressed down the entire team on the field before going in for halftime, he was prone to impulse.

Embarrassing the team in front of thousands is not usually a good thing. At 49, Petersen is so over that kind of look-at-me stunt.

“I know this when I was a player,” he said of his time as a quarterback at Cal-Davis, “you don’t need to scream and yell at those guys all the time to get their attention. In fact, you can be calm most of the time, and just by the way we look at them or the tone of your voice, can have the exact same effect. I’m not saying we don’t get loud or frustrated at times. But I think we’re always trying to communicate to these guys in a positive way.

“One of the things I want these guys to do when we play, is to cut loose and play fast. If they make a mistake, they know that’s not just on them. That’s on us as coaches as well. We’ll go back and practice and fix this. I want them to have fun and I want them to take chances. And I think a lot of that goes to the style and the way we coach.”

Those remarks echo sentiments expressed by another big-time boss in Seattle sports — Mariners manager Lloyd McClendon. As with Petersen and Carroll, McClendon is secure with himself and steady in his bearing. Those characteristics have become even more valuable in an era of media inundation, where young people willingly invite access into their lives without understanding the potential negative consequences.

Someone in their lives needs to have a grip. Carroll, Petersen and McClendon all have grips on themselves and their teams, not by bluster or intimidation but by clarity of purpose and relentless pursuit of consistency.

To describe their manners as old-school completely misses the point. Coaches of every era deal with generational changes in values and technology. Imagine the Gil Dobie era of Washington football when the automobile became affordable for many families. Imagine the trauma for coaches in the 1950s when television became ubiquitous.

And now imagine the distraction when the entirety of the world’s knowledge, and most of its people, can be accessed by a small device in pocket or purse.

When every one and every thing in the world seems capable of change, Petersen will be completely locked in on the task at hand for the moment, the day, the week. It’s reassuring.

And they all will wake up Friday and Saturday morning in Hawaii, a place many if not most never dreamed they would see.

“I’m just as curious as everyone else about what’s going to happen,” he said.

Much as he has coached against it, something crazy will happen. Huskies fans should be impressed that their coach is prepared to be unprepared. Takes preparation.