According to a story by MiLB.com, a Mariners scout heckled Jesus Montero at a game in Boise Thursday, then sent him an ice-cream sandwich. Montero threw it back at him. 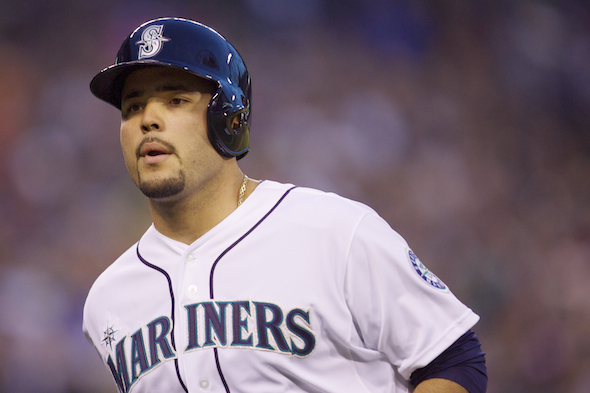 Jesus Montero supposedly was the target of mockery from a scout in the Mariners organization. / Drew Sellers, Sportspress Northwest

Not long after the extension of GM Jack Zduriencik’s contract conveyed a measure of stability for a franchise that endured a decade of tumult and ridicule, the Mariners are the butt of another national chucklefest after the industry’s house organ for the minor leagues, MiLB.com, reported that one of the club’s own scouts heckled Jesus Montero Thursday at a game in Boise.

The story said that after the scout, Butch Baccala, criticized Montero’s lack of hustle, Baccala had an ice-cream sandwich delivered to Montero in the third-base dugout of the visiting Class A Everett AquaSox, for whom Montero ws playing during a rehab assignment after straining an oblique muscle.

The gesture, mocking Montero’s off-season, 40-pound weight gain, drew an angry response. Montero came out of the dugout with a bat and confronted Baccala, yelled profanities at him and threw the sandwich at him before being pulled away.

Friday afternoon, after issuing a statement, Zduriencik told reporters before the Mariners 7 p.m. game against the Nationals that Montero was done for the season and would get counseling for his anger problems.

“He is not going to participate in any more baseball the rest of the year with us,” he said. “There’s a history here of things that have happened . . . “We are very, very disappointed in him. I think more than anything else, from a human standpoint, we have to look at Jesus Montero as a person, as a father and as a husband and how can we help Jesus Montero and his family get through this. That’s our first and foremost intent. We are in the process as we speak.

“We have avenues that we intend to go down. And we will have in-depth conversations with Jesus and his family on how we can help him go on with his life. At the end of the day, we all hope that Jesus Montero becomes a good big league player. But if that is not the case, then we certainly hope we help Jesus Montero to grow up and be a man and be the kind of father and the kind of husband that he needs to be.”

Regarding Baccala, Zduriencik said his fate will be handled internally.

We will do that very shortly, but we are still in the process of gathering all the facts,” he said. “We’ve had a lot of conversations with a lot of people. We’ll make sure that we dot every i and cross every t. It’s something that we intend to fix.”

Asked whether scouts typically talk with players during a game,  he said, “During a ballgame, I would hope not . . . A lot of our scouts have relationships with players. They’ve signed them, they’ve scouted them. They’ve been responsible for some of them coming to us in trades. So there’s nothing wrong with going down and having a conversation with anybody. We’re all part of the organization.

“This incident is, I think, an isolated incident that went over the top.”

“It’s not what is being portrayed,’’ Baccala told the Seattle Times by phone. “Of course I wasn’t (heckling); why would I? I work for the Mariners. I’ve worked my ass off for the Mariners. Why would I do anything to hurt anybody? That wasn’t even close to the intention.’’

Baccala said he couldn’t provide details until he spoke with Zduriencik.

“I received a call last night at approximately 9:30 pm informing me that there had been a verbal altercation between Jesus Montero, who was on rehabilitation assignment with the AquaSox while recovering from a strained oblique, and Mariners national cross checker Butch Baccala, who was scouting at the game.

“As soon as I received the call, I began trying to ascertain exactly what had occurred. I spent last night and this morning speaking with everyone involved.

“Although our investigation is not yet complete, I want to provide this update.

“First off, it is clear that both Jesus Montero and Butch Baccala engaged in behavior that is far below what we expect from members of our organization, including bad judgment at nearly every stage of this incident.

“I want to apologize on behalf of the Mariners franchise to the Boise Hawks and their fans. We recognize that fans, including children, were impacted by this incident, and the language that was used. We recognize the severity of this incident, and want to assure the Hawks and their fans that it will be dealt with appropriately. In addition, I want to thank Todd Rahr, president and general manager of the Boise Hawks, for his assistance in helping me ascertain what occurred last night.

“Jesus Montero has been recalled from his rehabilitation assignment and is on his way to Seattle. Butch Baccala has returned to his home in the Bay Area where he will remain until further notice.

“We will issue further information when it is appropriate as we deal with this unfortunate incident.”

Baccala was promoted to national crosschecker in November after serving as West Coast scouting supervisor.

The Mariners Friday recalled OF James Jones from AAA Tacoma and optioned RHP Erasmo Ramirez back to the Rainiers. Jones will begin his fourth stint with the Mariners this season . . .Ramirez absorbed a 12-4 loss Wednesday, allowing 10 earned runs to the last-place Texas Rangers. In six stints with the Mariners this season, he is 1-6 with a 5.21 ERA . . . OF Michael Saunders is back with the team after battling a viral infection he said he  caught from his daughter on a visit home. He lost 12 pounds. His return is unknown.