Thiel: The other Seahawks-Packers memory

No witness will forget the last visit by the Packers, the 2012 Monday night game decided by the infamous “Fail Mary” by Golden Tate. But do you remember the first half? 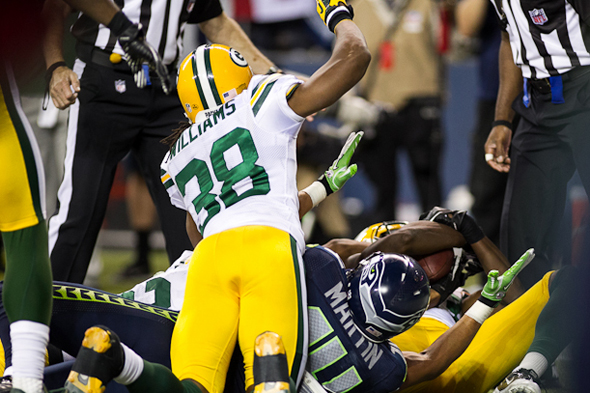 In the 2012 Monday Night melee, Golden Tate hasn’t yet pulled away the football. But he did erventually — at least, in the eyes of replacement referees. / Drew McKenzie, Sportspress Northwest

Transfixed by the mushroom cloud that erupted in 2012 after the “Fail Mary” intercept-down on a Monday night at the Clink that not only gave the Seahawks a controversial a 14-12 triumph over Green Bay, but settled the NFL referees strike, everyone forgot what happened in the first half.

“Nothing special,” CB Richard Sherman said Monday, responding casually ahead of the Thursday rematch at the Clink that begins the NFL regular season. “I remember our D-line got some pressure. I think we had eight sacks in that first half.”

For awhile, Packers QB Aaron Rodgers looked like a penny on a rail after the passing of a freight train. The eight sacks matched his career worst, and not long after began doing insurance commercials on TV.

DE Chris Clemons had four of those sacks, tying an NFL record for a half. He’s gone now, which is what Rodgers wants to happen to the memory of that game.

“I remember that the final score was in their favor,” Rodgers said tersely by teleconference with Seattle reporters this week. If it were possible to hear a grimace, we heard a grimace.

To help him with his fading memory, here is what he said then about the end-zone tussle for the ball that was ruled the property of Seattle WR Golden Tate: “It was awful. Just look at the replay. And then the fact that it was reviewed, it was awful. That’s all I’m going to say about it.”

That was enough. His words, and the Twitter-propelled remarks of a disgusted sports nation, helped bring about a settlement. But Rodgers also made another remark that addressed the game before the Fail Mary:

“We shouldn’t have been in that position.”

Exactly right. The Packers offense managed only two field goals through three quarters as the Seahawks defense began to make a reputation that came into full light eight months ago in New Jersey. A fourth-quarter TD inched the Packers into a 12-7 lead before the Seahawks’ final possession that transformed the NFL that season and introduced the world to Russell Wilson and the football storm brewing in the Northwest.

The Packers recovered sufficiently from the Fail Mary in 2012 to go 11-5 and reach the second round of the playoffs, where they lost 45-31 to the San Francisco 49ers. The same playoff fate befell them in 2013, when the Packers lost in the first round at home to the 49ers, 23-20. But Rodgers was only two games returned from a broken collarbone that cost him seven weeks, helping drop the Packers to 8-7-1.

But Rodgers returns healthy now to an offense invigorated by RB Eddie Lacy, who has given balance to an attack too dependent on Rodgers. The Packers are now the trendy pick as NFC champions among forecasters looking for reasons to pick against Seattle.

Sherman, naturally, is looking forward to a best-of-the-best matchup.

“It’ll be a chess match — it’s always fun,” he said. “He’s arguably the best quarterback in this football league. I’d say it’s between him and Peyton Manning. He can move, he can manipulate the game the way he sees fit. He just does a great job moving the defense with his eyes, going back and taking what the defense gives whether it be with his legs or with his arm.

“That’s what you respect about him. He’s a fantastic competitor and it’s going to be a great game.”

By the start of the 5:3o game, history will have been forgotten. But then there’s a fresh storyline to add to the Packers’ yips with West Coast teams. Last week, veteran center J.C. Tretter was lost for the season with an injured knee.

So Rodgers gets to take his snaps from a rookie, Corey Linsley of Ohio State, who will be experiencing the Twelves for the first time in his first NFL regular-season game. For the Twelves, it will be the first time they will experience defending the home field as Super Bowl champions.

The key will be keeping the sack count below eight, hope like hell the referees are properly compensated.

The Seahawks made a relatively unusual roster switch Monday, bringing back WR Bryan Walters to the 53-man squad and releasing fellow WR Michael Bates. No reason was given, other than getting different players for practice this week, but the speculation includes a potential trade for Bates that went away. If Bates clears waivers Tuesday, he likely will be retained on Seattle’s practice squad.

WR Percy Harvin missed three days in the past week for a personal issue, but was back with the team Sunday and Monday . . . Backup RB Christine Michael is “banged up” with a strained hamstring, but coach Pete Carroll didn’t elaborate; also “a little banged up” is CB Tharold Simon (knee). Also not participating Monday were TE Cooper Helfet (knee), C Lemuel Jeanpierre (neck) and rookie LB Kevin Pierre-Louis, who pulled a hamstring against Oakland Friday . . . Fellow rookie DE Cassius Marsh, who left the game with a sore hip flexor, practiced Sunday and Monday and is in “good shape,” Carroll said . . . WR Kevin Norwood (bone spur surgery) and OLB Bruce Irvin (hip surgery) practiced Monday; Carroll said he was uncertain about their availability for the game. Jeremy Lane (groin) also practiced.