As Washington and Washington State go through wild swings, FCS-level Eastern Washington does nothing but win. Huskies fans: Beware Saturday. 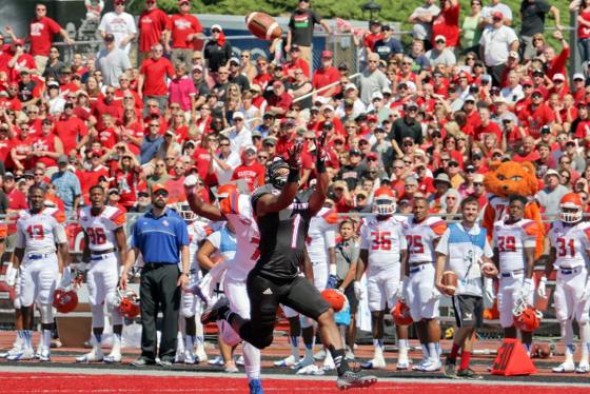 Eastern Washington University is a fine educational institution, but prestigious? Not really. Famous? No way. Nationally recognized? Not often.

Ah, but then there is football. Since 2000, Eastern Washington of the the Big Sky Conference has won more games (111) than Penn State, Tennessee and Stanford. Won more conference championships (seven) than Florida State, Alabama and Auburn. Won more national championships (one) than Oregon, Boise State and Michigan.

Obviously, the aforementioned schools play a notch above Eastern Washington in the NCAA’s Football Bowl Subdivision (formerly Division I-A). Still, Eastern’s current run of success – including 13 winning seasons the past 14 years, capped by the 2010 national title in the Football Championship Subdivision (formerly I-AA) – is dazzling for any level of athletics.

The Eagles of Cheney, loaded as usual with Puget Sound-area high school products, are ranked No. 2 in the FCS coming into Saturday’s game at Husky Stadium against Washington (noon, Pac-12 Networks). The Eagles are 2-0, the Huskies 1-0, having dropped out of the AP top 25.

The reasons behind Eastern’s consistent excellence are many and varied. The coaching and recruiting skills of former head coaches Mike Kramer (1994-99) and Paul Wulff (2000-07) and current head man Beau Baldwin (since 2008) and their staffs have certainly played a vital role.

Arguably, however, the grit and resolve that is the calling card of Eagles football can be traced to a man who was all about grit and resolve as a player, assistant coach, head coach and athletic director at Eastern. Dick Zornes led EWU’s charge into the I-AA ranks in 1984 as head coach, and the Eagles played in the national playoffs just one year later.

“This is all a Dick Zornes deal,” insists Kramer, now the head coach at Idaho State. “Don’t say Mike Kramer or Beau Baldwin or Paul Wulff without making sure that Dick Zornes is the king of the hill. The three of us are just guys that have stood in his shoes.”

Zornes coached and won more football games at Eastern than anyone else, compiling an 89-56-2 record from 1979-93. Kramer and Wulff came to Eastern as assistants under Zornes.

“There’s been a succession of awfully good coaches,” says Zornes, who is now retired. “Mike Kramer was a good coach. Paul Wulff, at that level, was a very good coach, I think. And Beau is the best of the bunch.

“He is, in my mind, a very, very good coach, especially on the offensive side of the ball. He’s been a real credit to the university in almost every way. Not only his coaching ability, but his humanity and his loyalty to Eastern.”

Zornes is quick to add, “If you don’t have players, I don’t care how good you coach, it doesn’t make a lot of difference.”

The state of Washington has long been a fertile breeding ground for college football talent, and the Eagles have prospered by developing in-state players deemed not quite fast or big or skilled enough by Pac-12 Conference schools like Washington and Washington State.

“The talent level at Eastern Washington is so good because of the recruiting base,” Kramer states flatly.

“The state of Washington has a LOT of Big Sky-caliber athletes,” Zornes says.

The Eagles’ wide-open, high-scoring offense appeals to recruits and fans, as does the red artificial-turf field. Eastern has reaped recruiting benefits from Idaho’s recent struggles, Boise State’s evolution from Big Sky powerhouse to FBS force and the demise of junior college football in the state.

“Winning breeds winning,” says Tennessee Titans offensive tackle Michael Roos, entering his 10th season in the National Football League after starring at Eastern. “Once you start doing it, everyone wants to be part of it.”

Four years have passed since Roos and his wife donated $500,000 to help Eastern install its signature red turf.

Baldwin has kept Eastern “on the map” by posting a 58-22 record in six years on the job. Zornes wonders aloud how much longer the Eagles can keep Baldwin.

“He’s been a great ambassador for the university,” Zornes says.

“He makes it fun,” Roos says. “Guys have to work, but while having some fun. Obviously, winning makes working fun. Guys are able to buy in.”

The Eagles, coming off a 12-3 season and a second straight loss in the national semifinals, return a wealth of talent. Success in Cheney has become a forgone conclusion.

“I said after three years on the job – and I was head coach there for 15 years – I said, ‘If we do things right at Eastern, we can win a national championship,’” Zornes recalls.

“We bounced in and out of doing things right and wrong for a long time (in terms of administrative support) before we settled in to, ‘Hey, athletics is a ‘front-porch situation’ for us, and we’re going to build our university and we’re going to make sure athletics helps us build it,’ which has been a real credit to the last president (Rodolfo Arevalo).

“Now they’re in the top-five teams in the country at their level every year. I mean, their future is what it is, and it’s pretty good.”